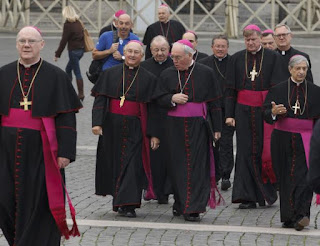 I have not offered much thought or commentary on the 2015 Synod thus far; my reasons are fairly the same as those offered by Ryan Grant in his recent article "Why no synod coverage?" (Athanasius Contra Mundum, Oct. 7, 2015); at any rate, by now there is ample evidence to prove that Synod 2014 was rigged, and nobody should be surprised that the 2015 Synod will be pushed towards a predetermined outcome as well. Rorate just had an excellent piece suggesting that the Synod is turning into Vatican III. Radicals will always hijack these sorts of deliberatory bodies, taking advantage of procedure to relentlessly drive their progressive agenda.

Is anyone really surprised by this? Anyone who has been paying attention should not be. What is surprising is not that the liberals are trying to turn this into Vatican III, but that the conservatives are making the same fundamental errors they made at Vatican II.

Say what you want about the liberals, but they know how to set an agenda and ram it through. They position themselves to get the right press at the right time. They appeal to the emotions. If they want something done, they get their people in the right places, dominate committee discussions, relentlessly use the parliamentary processes to drive their agenda, and shut down opposition. They find pretexts to eject orthodox candidates from seminary. They orchestrate the firing of faithful Catholic journalists. In short, they fight.

I have been in government before, and I tell you, those who win are not necessarily those who have the best or "right" ideas, but those who know how to use the existing authority structure to facilitate the implementation of their ideas. They fight and they use the system and its structures to fight for them.

Conservatives tend to take the misguided position that merely speaking the truth is sufficient. That, in the face of the liberal onslaught, it is enough to calmly reaffirm the Church's constant teaching, perhaps in the naive confidence that the truth will always win out in the free marketplace of ideas. Are the liberals ramming through a heterodox praxis? Publish an article on the Church's real teaching. Are they dominating the procedures of a meeting to get their people on the right committees and drive their agenda? Give a talk. Just speak the truth. Hand out copies of a book.

The liberals recognize that the Synod - or, in another historical context, the Second Vatican Council - presents an opportunity to get something done. They understand it as an event, a moment in history at which a turn can be taken. By and large the conservatives didn't (and don't) take this approach. They viewed it more reductively in terms of the language used in some documents - as if the momentous importance of an Ecumenical Council or this horrid Synod could be reduced to some vocabulary!

This was the approach the conservatives took at Vatican II. God bless them for what they did do, but as Dr. Mattei has pointed out in his excellent book The Second Vatican Council: An Unwritten Story, the conservatives fundamentally failed to understand what was happening at Vatican II (see here for our review of Dr. Mattei's book). By a narrow focus on what sorts of wording was creeping into the documents, the conservative fathers failed to understand that the Council was being used as an event from which to institute massive change in the Church in a manner that went far beyond the problems of the documents. Neo-Catholic apologists continue to make this error to this day whenever they choose to narrowly focus on the documents of Vatican II, as if the import of the Council was exhausted by the documents.

The same mistake is being made again with the Synod, although this time the conservatives are in a much weaker position. Why? Precisely because they have continued to make the same error for fifty years, a consequence of which is that liberalism has made such astonishing gains since Vatican II that a conservative reaction has much more against it than it did in the 1960's.

How could conservatives have conceivably "fought back" more than they did? It is interesting to read Pope St. Pius X's Pascendi with this in mind. Pascendi, of course, was the famous encyclical which exposed and condemned Modernism. But Pius X was not content to simply speak the truth; he put his convictions into practice by taking positive action against Modernism. Pascendi decrees that Modernists be deposed from teaching positions. If they are clerics, their bishops are to place them in the most obscure of offices where they can cause little trouble. Their books are to be censured. The Oath Against Modernism is instituted. Anti-Modernists are promoted while it is made known that no Modernist has any future possibility of promotion (if only that had remained true!). SO vigorous was his assault that the Modernists and progressives complained about his heavy hand.

In short, Pius X never thought merely stating the truth was sufficient; he needed to use the power at his disposal to see it pushed through.

What could conservative bishops do, or have done, that they have not?
The thing is, though, because of fifty years of not doing these sorts of things, there is much fewer truly conservative bishops than there were in 1963 - and the likelihood that any one of them will take up such an aggressive program of orthodoxy. And, if they did, there is a good chance they might not find themselves in their See for very long.

But this position of weakness only comes from being weak for too long. The point is that speaking the truth alone is not enough. One must have an agenda and one must drive it relentlessly. That is what the liberals have done successfully for over 200 years. It's what faithful Catholics used to do. Perhaps the modern Church lost the stomach for that sort of thing when John XXIII advocated using the "medicine of mercy" instead of the Church's traditional arsenal of weapons. Who knows. But the fact is, episcopal defenders of tradition had better be prepared to not only speak the truth but to use the powers of their apostolic office to actually enforce it.

Otherwise, they (and we) will be like a man on a sinking ship, sitting calmly on a deck chair proclaiming that the ship is sinking while doing little else to stop it. Certainly, as the ship disappears beneath the icy, black waters, we may have the consolation of saying, "See, I was right! I told you the ship was sinking"; but then again, if the ship goes under and the passengers all die, this consolation is quite empty indeed.

THE VATICAN SYNOD ON THE FAMILY

The Hegelianization of sex. Hegel's head upright or upside down, matters little. In a Young Marx manner, or the Old, it's the same as with the Young Hegelians or the Old one (that is the "historic Hegel" picked up by Marx. Ludwig Feuerbach, Bruno Bauer, or Max Stirner, it still holds.

All, in time, must be Hegelized. Including, especially sex - it is the last World-Historical Moment, the final unfolding of Consciousness.

Queer Theory is nothing, and quite rooted in the German Ideology. All the fellows above knew that the 50 Shades of Sex becoming historicalized was he end game: Max Stirner"s totalitarian individualism mating Marx's totalitarian communalism.

The Sex Synod in Rome this October, in the Year of Our Lord, 2015, is their final battlefield - that is until the Horde of Islam crosses the Rubicon, crashes the gates, and whitewashes the ceiling of the Sistine Chapel.

Liberals have two modes of operation. When they have power, they are completely ruthless in pursuing their goals, allowing no opposition and removing anyone in their way. When they are out of power, they continually challenge authority for weakness and play the victim card as much a possible.

Conservatives also have two modes of operation. When they have power, they tepidly push their goals and are eager to lay them aside at the least resistance. When they are out of power, they maintain a stiff upper lip avoiding confrontation at all cost.

No, thank YOU! Love your stuff!