"I will go in unto the Altar of God
To God, Who giveth joy to my youth"
Tridentine Community News by Alex Begin (July 30, 2017): 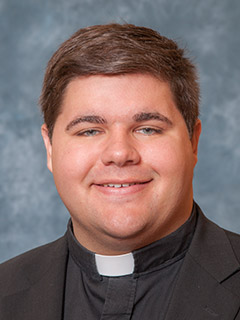 Long-time readers may recall that Fr. Jake van Assche has served as Subdeacon at Solemn High Masses for the St. Benedict Tridentine Community prior to his ordination to the sacred priesthood. Since ordination, he has celebrated Low Masses at St. Michael Church in Pontiac during Lent. Fr. Jake became interested in the Extraordinary Form when it began to be offered at his family’s parish, St. Stephen in New Boston, in 2008.

This Friday, August 4, Fr. Jake will celebrate his first High Mass at Old St. Mary’s. This is a homecoming of sorts for Fr. Jake, as he has received spiritual direction from one of the priests at Old St. Mary’s. We hope you can join us in thanking Fr. Jake for his willingness to offer the Traditional Mass.

In response to an inquiry from a Tridentine Mass choir from the Philippines, the Vatican’s Pontifical Commission Ecclésia Dei has ruled that it is no longer permissible for a bishop to celebrate a Missa Cantata, that is, a sung Mass without the additional clergy and ceremonies that constitute a Pontifical Solemn Mass. 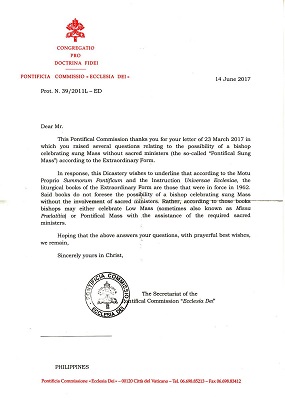 In 1962, the only options for a bishop were to celebrate Pontifical Low Masses or Pontifical Solemn Masses. The Pontifical Missa Cantata was authorized in 1964 in the document Inter Oecuménici, likely because even at that time it was becoming increasingly challenging to assemble the trained clerical entourage necessary to support a Pontifical Solemn Mass. In light of the fact that this document included instructions paving the way for the 1965 transitional missal, the PCED must believe that it did not strictly pertain to the liturgy of 1962, thus the permission given in it is not valid. While that viewpoint is understandable, the PCED has been given the authority to amend the 1962 rubrics when beneficial. For example, the PCED ruled that laymen who have been installed as an Acolyte may fill the role of Subdeacon at a Solemn High Mass. This is a logical adaptation to the needs of our time, when truly ordained Subdeacons are only found in the priestly communities that are granted use of the preconciliar rites of ordination. That makes it all the more puzzling why the PCED would not see a similar benefit to the faithful in permitting the Pontifical Missa Cantata. Furthermore, it is odd to think that a bishop – who has the fulness of Holy Orders – might have less faculties than a priest.

This writer has substantial experience organizing Pontifical Masses in our region. The few local bishops who have consented to celebrate the Traditional Mass, Bishop Earl Boyea in Lansing, Auxiliary Bishop Donald Hanchon in Detroit, retired Bishop Eugene LaRocque in Windsor, and retired Auxiliary Bishop Francis Reiss in Detroit, have all celebrated Pontifical Missa Cantatas. That has been challenging enough to arrange. None of them has the interest to learn the Pontifical Solemn Mass.

Our next local Pontifical Mass – Bishop Hanchon’s Mass before Confirmation on October 1 at the OCLMA/Academy of the Sacred Heart – will thus be a Pontifical Low Mass. We will, of course, make it the highest of Low Masses, with hymns and motets sung by the choir. There will, however, be nothing sung by the celebrant, no Aspérges, and no sung Ordinary or Propers. 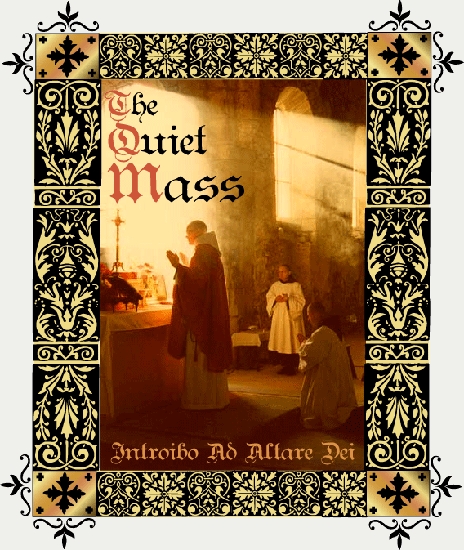 After many attempts at unsuccessfully trying to resolve the blog problem, our good friend Alex Begin immediately identified the problem as the background image, which was taking forever to load. I'm still not sure what changes Google made to it's Blogger program that triggered this sudden slow down; but the issue is resolved. The background is now a simple white, but the blog loads immediately and will allow continued posts. So Deo Gratias. Thanks also to Christopher Blosser for his many related tips, which helped perfect the new format.
Posted by Pertinacious Papist at 9:30 PM No comments:
Email ThisBlogThis!Share to TwitterShare to FacebookShare to Pinterest
Labels: Blog, Personal

The Russians have hacked by blog!!!

I'm not sure what's wrong, but one of my readers notified me that my blog is on the fritz. My son Christopher who knows a lot about these things is working with me to resolve the problem. In the meantime, one wag suggested that it must be the Russians. I'm inclined to agree. Perhaps it was Putin himself. In collusion with Trump. After all, that's about all the Democratic Media have been saying for the last six months, is it not? It's the Russians! It's the Russians! We can overlook the 'indiscretions' of Clinton that compromised national security, involved multiple violations of constitutional law, and got innocent people killed, but there's sure to be a Russian plot behind all this. Think I'll hire a Grand Inquisitor. Or a Special Prosecutor.
Posted by Pertinacious Papist at 9:35 AM No comments:
Email ThisBlogThis!Share to TwitterShare to FacebookShare to Pinterest
Labels: Blog

New studies: 'responsible contraception' doesn't prevent pregnancy or abortion in more than half of cases

Posted by Pertinacious Papist at 9:27 AM No comments:
Email ThisBlogThis!Share to TwitterShare to FacebookShare to Pinterest
Labels: Abortion, Contraception, Life issues, News

Comment by Guy Noir - Private Eye: "Does anyone really think there will be a long gap between the emergence of protestant Saints and the emergence of non-Christian ones? There's the rub!"
Posted by Pertinacious Papist at 9:26 AM No comments:
Email ThisBlogThis!Share to TwitterShare to FacebookShare to Pinterest
Labels: Catholic opinion, Confusion, Pope Francis, Saints

Google makes a point of ignoring the birthdays of traditional celebrities of the western tradition. It wouldn't be caught dead celebrating the feast days of Catholic saints. Instead, it makes a point of celebrating the 'feast days' of offbeat, marginalized figures, non-whites, often women, often unknown, sometimes of dubious distinction. This isn't a bad thing as such, except insofar as it leads to ignorance about meritorious figures in the traditional western canon of celebrities. It is most certainly, however, a very politically correct thing.

When Google chose the Canadian pioneer of media theory, Marshall McLuhan, as its 'saint' for the day (his birthday was July 21, 1911), I have little reason to believe that they had in mind feting this Canadian professor for having converted from agnosticism to the Catholic Faith. Here are the delicious facts, however, lifted directly from Wikipedia:

While studying the trivium at Cambridge, he took the first steps toward his eventual conversion to Roman Catholicism in 1937, founded on his reading of G. K. Chesterton. In 1935, he wrote to his mother: "[H]ad I not encountered Chesterton, I would have remained agnostic for many years at least." At the end of March 1937, McLuhan completed what was a slow but total conversion process, when he was formally received into the Roman Catholic Church. After consulting a minister, his father accepted the decision to convert. His mother, however, felt that his conversion would hurt his career and was inconsolable. McLuhan was devout throughout his life, but his religion remained a private matter. He had a lifelong interest in the number three (e.g., the trivium, the Trinity) and sometimes said that the Virgin Mary provided intellectual guidance for him. For the rest of his career, he taught in Roman Catholic institutions of higher education. From 1937 to 1944, he taught English at Saint Louis University (with an interruption from 1939–40 when he returned to Cambridge). There he taught courses on Shakespeare and tutored and befriended Walter J. Ong, S.J. (1912–2003), who went on to write his Ph.D. dissertation on a topic that McLuhan had called to his attention, and who also became a well-known authority on communication and technology.

Who was it that said "even a blind pig can find an acorn once in a while"?
Posted by Pertinacious Papist at 9:25 AM No comments:
Email ThisBlogThis!Share to TwitterShare to FacebookShare to Pinterest
Labels: Converts, Media, News, People

The Marcello Pera interview: a political interpretation of Pope Francis

President of the Italian Senate Marcello Pera is a classical liberal Catholic and friend of the former Pope Benedict XVI, with whom he co-authored a book: Without Roots: The West, Relativism, Christianity, Islam. Here he is interviewed by Corrado Ocone (Il Mattino, July 9, 2017), translated by Rorate Caeli in "THE ULTIMATE INTERVIEW to Understand all About Pope Francis: Marcello Pera, Italian politician and close Ratzinger friend" (Rorate Caeli, July 14, 2017).
Posted by Pertinacious Papist at 9:24 AM No comments:
Email ThisBlogThis!Share to TwitterShare to FacebookShare to Pinterest
Labels: Catholic opinion, Confusion, Politics, Pope Benedict XVI, Pope Francis

Spadaro and Figueroa in La Civiltà Cattolica: Eeeek! The FUNDAMENTALISTS are coming!!!

Thanks to those of you who offered a Hail Mary (or more) for our safety during our three weeks of travel. We are home again, safe and sound; and as wonderful as other places may be that one may visit over the course of vacation travels, coming home is always wonderful.

I will post a brief resume of our travels with some personal impressions in the next few days.