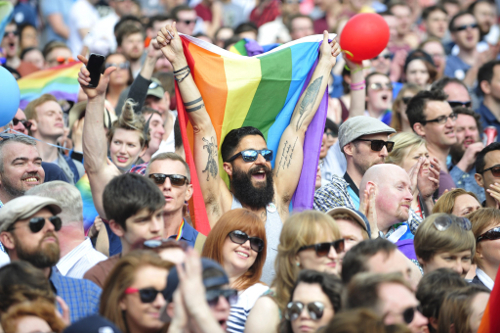 Editor-at-Large of the Jesuit magazine America, TWEETS: "Ireland is for gay marriage because it is Catholic," referencing a USA Today article by Fr. Paul Morrissey (below right), a novelist and prison chaplain in Philadelphia. Makes me think of a comment someone

made recently: the Irish referendum cannot be credited to a failure of the Irish priesthood. It was a measure of their success. I'm not sure whether that doesn't overstate the case a bit; but regrettably maybe not much, if Fr. Martin and Morrissey are any indication of the state of many clergy in the English-speaking world today. Yeah, that's a victory that will really help the Irish get themselves to heaven.

[Hat tip to Marcel's Ghost]
Posted by Pertinacious Papist at 9:21 PM
Email ThisBlogThis!Share to TwitterShare to FacebookShare to Pinterest
Labels: Decline and fall, Dissent, Homosexualism, Liberalism, Signs of the times

Yet his original tweet perfectly echoes the misleading thrust of the article to which he points. And he refuses to clarify on iota. In fact, I have searched in vain to find him ever label homosexuality as immoral. His ambiguity is a perfect example of that vagueness endorsed by Vatican II, and hence his priesthood a perfect example of the teaching exercises that use Catholic vocabulary to produce a Catholicism that is closer to a modern-day Episcopalianism.

Having left the ECUSA myself, that characterization is intended as anything but a compliment.