"The Next Synod is a Battle between Christ and the Antichrist: - On whose side will you stand?" 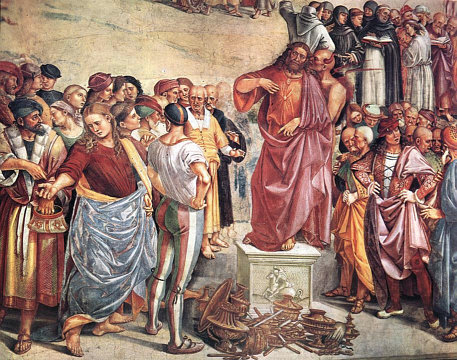 Guy Noir, call your pharmacy! Alessandro Gnocchi, in his a Riscossa Cristiana column via a Rorate translation, writes:

[T]he Catholic world that is commonly called “not of the left” or “not progressive”, save the rare exceptions that are able to operate in a way that is truly going against the current, is made up of unconvincing intellectuals who are thirsting for legitimization ....

[There are those who] are scandalized by the fact that whoever tries to voice an objection in the face of the current situation is quickly labeled as “a divisive person”…The tactic of accusing dissidents of being “people who divide” usually is employed by those in power or by the spineless....

The Church of the last decades has functioned, or rather malfunctioned, by actually anchoring herself to a will to be the friend of Caesar. She has been weak to the point of losing blood on the ground of doctrine and morality. She has shown herself to be aggressive and unsparing in her repression and negation of every legitimate opinion that has the intent of reaffirming the doctrinal and moral truths. The result is to silence those whose intent is to defend her and to give free reign to those whose intent is to destroy her....

They take delight in idealistic political plans of action, while what is really going on is a war between Christ and the Antichrist on a scale never seen before, where the survival of the Catholic faith is at stake. I repeat: we are in a battle to preserve the Catholic faith, and all the battles being fought on various fronts, even those that are so important like moral truth, are only the terrain of confrontation in a war that is much deeper, involving metaphysics and religion. The most important thing in play is faith. But faith is preserved whole and intact or it is lost. You cannot preserve just parts of it according to taste or expediency.

... This is what has made the Synod on the Family recently concluded so dramatic an event and will make the next one even more so. What happened and will happen, will be not only a face-off between two different schools of thought, but the face-off between those who intend to preserve the Catholic faith as a whole and those who want to change it. In a few words, even if we are talking about bishops, cardinals and the Pope and therefore my words may appear to you to be harsh, even there we are dealing with the battle between Christ and the Antichrist. It remains only for us to choose which side to stand on.

The popes, the teaching authority of the Catholic Church ( magisterium) pleases the political Left. It does not identify the Marchetti heresy.It has allowed an irrationality to enter theology.

It does not correct the false inference from 1949.Instead it has made the error the basis of a 'new theology'. It is a factual error. The error ( new theology) is linked to Pope Pius XII.The pope who cannot be beatified because the Jewish Left objects.

They have welcomed the beatification of Pope John XXIII and Pope Paul VI, who opened and closed Vatican Council II.This was Vatican Council II interpreted with the Marchetti premise.Without the premise the Council would be Feeneyite and objectionable for them.

There are two important points that Pope Francis and Pope Benedict may have intentionally overlooked. It could be intentional since there are so many reports on the Internet which identify it. To please the political Left they do not clarify these two points.

1) Before 1949 no Church document stated that there were known exceptions to the dogma extra ecclesiam nulla salus.It was never said that salvation in Heaven in any form, was explicit in personal cases.Cardinal Francesco Marchetti Selvaggiani in the Letter of the Holy Office 1949 inferred this.

2) In 1949 no one personally knew of any one saved outside the Church i.e without 'faith and baptism'(AG 7).They could not name anyone.

So to reject a defined dogma,defined by three Church Councils, with this irrational reasoning is heresy.It also changes the interpretation of the Nicene Creed and Vatican Council II. This is magisterial heresy.

The Magisterium does not announce that Vatican Council II really says all need to convert into the Church and Catholics are the new people of God, the Chosen People. Vatican Council II indicates that we really cannot have a reasonable hope that all men are saved, and that all Jews, Muslims and Christians ( non Catholics) in Rome, are on the way to Hell ,unless they convert into the only Church Jesus founded.1

Instead the Curia at Vatican City assumes that Lumen Gentium 16 ( saved in invincible ignorance) etc refer to known cases in the present times (1965-2015).So they have an explicit exception, in LG 16, to the dogma on exclusive salvation in the Catholic Church. This results in a new theology, a new ecclesiology.

So 'I believe in one baptism for the forgiveness of sins' (Nicene Creed) is changed into 'I believe in three or more KNOWN baptisms for the forgiveness of sins. They are the baptisms of desire, blood, seeds of the Word (AG 11), elements of sanctification and truth (LG 8), invincible ignorance (LG 16), imperfect communion with the Church (UR 3) etc.These are baptisms without the baptisms of water since there are is known salvation outside the Church.'

This is irrational, non traditional and heretical.It is a first class heresy in the hierarchy of truths.

This is magisterial heresy which the Society of St.Pius X (SSPX), Franciscans of the Immaculate,traditionalist and conservative Catholics have to accept to avoid being labelled schismatic, heretical, etc.
-Lionel Andrades

Any place Pope Francis is near, I hope to be quite far from.