Pope of surprises: a new (non-Catholic?) doctor of the Church

On February 21, Pope Francis announced his decision to make St. Gregory of Narek (950-1003) a Doctor of the Church. Once again, Pope Francis has caught us off guard and now many people are scrambling to figure out who St. Gregory was and what the implications of the new honor bestowed upon him are. One key question that is arising is: was St. Gregory a Catholic?

The short answer to this question seems to be no. He was a member of the Armenian Apostolic Church, which is a non-Chalcedonian Church (sometimes referred to somewhat pejoratively as a Monophysite Church), because of its rejection of the Ecumenical Council of Chalcedon.

I untied the spittle flecked nutty of a message from the claw of the carrier pigeon that Guy Noir sent me. He sounded like he was out of Prozac again:

Pope Francis reminds me on a precocious collegiate contrarian. He simply can't play inside any box or not try to be just a bit outrageous. Here is this latest from CWR. Really, you have to laugh. At this rate, I wouldn't be surprised if someday he doesn't roll up his sleeve to reveal a couple of new tattoos... a soccer ball and ad majorem Dei gloriam, or something like that... 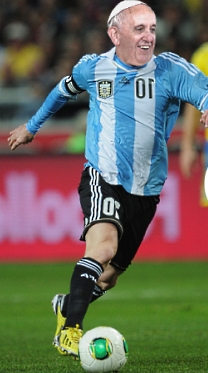 Very humble of him to take the focus off Christ during Lent and put it back on himself and his effusive wonderfulness.

Serious question: how is it possible for a non-Catholic to be declared a Doctor of the Church?

I suggest we inaugurate a new drinking game called DOCTOR WHO?

Every time I suggest a candidate you agree is worthy of postconciliar adulation,

Geting mor wistful with each bourbon....

A Creative Conglomerate: WESLEY HILL, EVE TUSHNET, and HARVEY MILK
(Oops! One too many, different crowd of friends there. No worries :) !)

Meanwhile, maybe in a neutering parallelism such as that exemplified by the coupling of Pope John and Jphn Paul II, we could simultaneously add Dietrich von Hilderbrand and Reginald Garrigou-Lagrange.

Right, THAT'LL happen. In someone's dreams. Meanwhile, I await the arrival of "Dream of My Father" on parish spiritual reading lists.