A newly-discovered blog by a take-no-prisoner layman from Canada who's astute insights are surpassed only by his insane sense of humor, which promises to offend many:

"THE HERESY HUNDER, Scourge to enemies of the Roman Catholic Church" (or "... where it's ZERO HOUR for heretics and other enemies of society"): 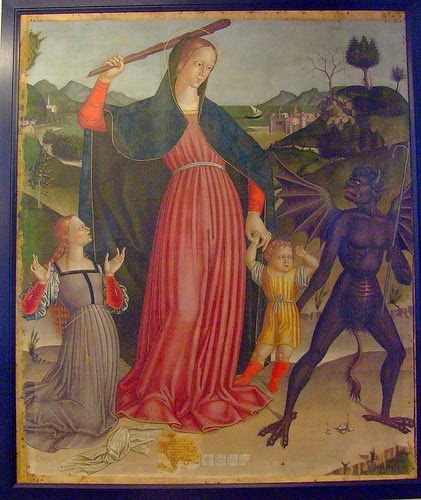 ...there is an "anti-Church" within the Church arguing against Orthodoxy and undermining all that might be done. Before anything else there must be a purification, a clear proclamation of Catholic Truth. Heresy is an attack on Truth... Heresy and heretics are the enemies of Christ and we really must pray for the Grace to recognise them for what they are and to learn to hate them for the terrible damage they do to the Church's ability to make Christ knowable. They are our enemy and the enemies of the Church... heresy tends to make truth obscure to the point where good becomes evil and evil becomes good.

There is an "anti-Church" within the Church labouring in parishes, deaneries and curial offices in complete opposition to Pope Benedict's teaching that the Second Vatican Council should be interpreted in a hermeneutic of continuity... This anti-Church seems to have existed in hidden form underground for many decades but grasped the Second Vatican Council to come out into the open and now openly preaches in opposition to the public teaching of the Magisterium of the Church.

PART 1
I. Those comments are apropos lead-ins for the subject matter treated herein, a kind of addendum to Ominous Signs. Another post late after the fact - which will come in three parts, yet the "Vatican II: For the Next Generation" conference held last year at St. Paul University is worthy of a post hoc assessment of involved participants and elaboration on critical points, for three reasons. Firstly, because of a cosmic teleconnection. The 2012 CCCB Plenary took place from September 24 to 28 and the SPU conference from September 27 to 29. There was date and location overlap, a convergence in the apostatic/heretical space-time continuum, so to speak. Where the personages and productions of the CCCB are embodiments of the Modernist hijacking of Vatican II Council, attendees at the SPU conference are its marketers and salesmen. SPU is in Ottawa, located just 131.1 kilometres west-southwest of Hotel Mont-Gabriel in Sainte-Adèle, Québec, according to Google Earth. So, for those conference participants at the CCCB plenary - like salesman/jetsetter Fr. Gilles "I love Armani suits" Routhier, it was just a matter of a short limousine drive up to the airport at fashionable Mont-Tremblant. Check-in, luggage drop-off, redeem those Air Miles, slug down a chocolate martini in the lounge, then board a Porter Airlines' Bombardier Q400, business class, wink to the sexy stewardess, honey roasted almonds snack-pack, fasten your seat belts, METARs read clear and sunny skies on the horizon, activate transponder, go for ignition, runway clear for take-off - and we're rockin' and rollin'. Short flight over the St. Lawrence to Ottawa Macdonald-Cartier International Airport. Touchdown on Runway 25. "On time". Yeah, baby, yeah!

II. Secondly, the conference provided a perfectly composed snapshot of the careerist/intelligentsia from assorted sectors inside the establishment church, of how they are working to undermine the Church in Canada from within, and recreating it in their own perverted image. Accordingly, an assessment of their views with a just few volley's will allow for a sizeable flock of Dodo birds to be exposed for the damage they do. These are the people that interact with, and are approved by, the Canadian bishops, consulting, advising, confidants. These are the people the bishops read and to whom they lend their ears. These are the ladder climbers, the celebrity seekers, the aggrandizers, the Professional Catholics, the people who always seem to almost magically obtain key positions in the religious bureaucracy, who get the write-ups in diocesan newspapers, who get the interviews on Salt+Light TV, who win the "awards" and get to hobnob with the right people. These are the enemies of the Church to whom Fr. Blake and Fr. Henry make reference. The SPU conference was a Canadian example of this "anti-Church" in action, actualized, asserting itself for everyone to behold so as to admire and to wonder a great wonder.

III. Thirdly, it was the 50th anniversary of the opening of Vatican II, so glitz, glitter and glamour at a gala were necessitous, to formally justify the Modernist-actuated catastrophe we see all around us today, which cries out for criticism. The Canadian stars of the Nu-Church came out, gathered at a Pontifical University now undeniably gone heretical, its loyalty to the Pontificate spent long ago, to celebrate five decades since the Council, to proclaim and hail it as the ultimate triumph of the Church since when the Lord of History was impaled at the intersection of two wooden beams. Not as if these Magic Circle luvvies actually ever contemplate the utter brutality of the Crucifixion, as will be evidenced later. Really, if you mine into the psychological subsurface, if you go way down deep... deep, you will discover the SPU confab to be Swan Song disguised as a Victory Cheer. Conference subtitle: "Reflecting on the importance of the council's teaching for the Church of the 21st century". How majestic, how spectacular, how far-reaching and life-altering. Again, there's that false, anticipatory sense of being on the verge of a new era in global affairs, a "new order of human relations", as the CCCB president voiced a few days earlier at the plenary. The worldwide ennui is about to cease and humanity will imminently be reinvigorated. The future's so bright, I gotta wear shades...

We start with a clear vision:

I. Emeritus Pope Benedict XVI spoke those candid words in the Vatican's Paul VI Hall a few days after his abdication announcement. He was addressing clergy and parish priests in the Diocese of Rome, holding them "captive" during a rather long talk, 46 minutes, without prepared text. His usage of the phrase "popular sovereignty", and all it entails in the context of the Second Vatican Council, ties directly in to Part 1 of this analysis, wherein near the end reference was made to the "human legislator" concept of Marsilius of Padua. That is, a democratized, egalitarianized, immanentized church, stretched and flattened out across a horizontal plane, where an amorphous, collectivist, totalitarian-like vox populi control all the levers. That is the unswerving tendency, the push, the danger, the crisis, in this post-Conciliar period. That gorgeous and tantalizing siren, her beautiful voice, the sound of a thousand coloraturas, mesmerizing, beckoning, irresistible, that phases out the spirit, confuses the intellect, weakens the will. It cannot be otherwise. It is her nature.

"BEING AN EXERCISE IN THE UTILIZATION OF SEQUENTIAL SYMBOLOGY TO VISUALLY CHARACTERIZE AND SYNOPSIZE "CONSERVATIVE" NEO-CATHOLICISM" (The Heresy Hunter, October 6, 2013):

Francis is not so much aiming for precision as shooting the breeze.