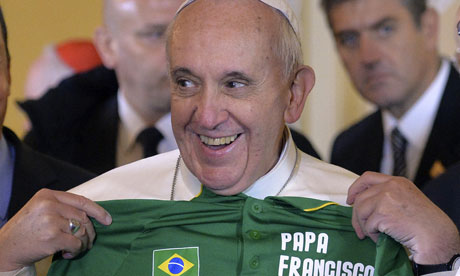 A fascinating article about Pope Francis, prior to him being made Pope, by Mervyn F. Bendle may be read at Quadrant Online. PopeWatch was struck by this passage:

Nevertheless, such problems were substantial and the criticism he faces has been emphatic. For example, a presently serving provincial of another Latin American country and one of the most senior figures in the Society of Jesus confided his negative views in an e-mail quoted by Paul Vallely, in his new biography, Pope Francis: Untying the Knots (2013):

Yes, I know Bergoglio. He’s a person who’s caused a lot of problems in the Society and is highly controversial in his own country ... As Provincial he generated divided loyalties: some groups almost worshipped him, while others would have nothing to do with him ... He left the Society of Jesus in Argentina destroyed [and] we have spent two decades trying to fix the chaos that the man left us ... It will be a catastrophe for the Church to have someone like him in the Apostolic See.

As Vallely observes, “this constituted an extraordinary counterblast” to the acclaim that otherwise met the election of Pope Francis, but it was “far from a lone voice” from within the Jesuit order to which Bergoglio had dedicated a major part of his adult life.

It is remarkable to PopeWatch how little analysis there has been of the life of Pope Francis prior to his being elected Pope. The type of polarizing personality mentioned in the passage above seems to be demonstrated in the current papacy. Here is the full [article].

Many more articles like this one would be a great resource in attempting to understand Pope Francis and where he is likely to lead the Church.

Combox comments follow of this sort, among others:Related: Mark Lawson, "Pope Francis: Untying the Knots by Paul Vallely – review" (The Guardian, July 31, 2013) - "An exploration of Pope Francis's liberal reputation and murky past lifts this book well above the nervous reverence of much papal biography."
Posted by Pertinacious Papist at 9:25 PM
Email ThisBlogThis!Share to TwitterShare to FacebookShare to Pinterest
Labels: Catholic opinion, History, Jesuits, People, Pope Francis

A review of "Untying..."
http://www.theguardian.com/books/2013/aug/02/pope-francis-untying-knots-review