"I will go in unto the Altar of God
To God, Who giveth joy to my youth"
Tridentine Community News by Alex Begin (November 8, 2015): 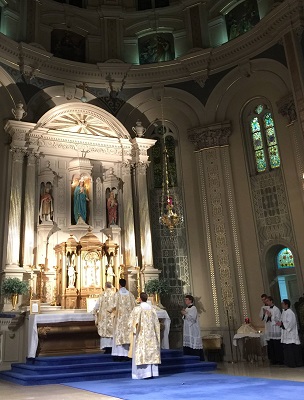 Two significant and visually compelling events were held recently: On Friday, October 30, the first Tridentine Mass in over 45 years was held at Detroit’s Old St. Mary’s Church. [Fr. Joseph W. Tuskiewicz, the celebrant, and Fr. David Bechill, the decon, were both former students at Sacred Heart Major Seminary in Detroit.] Located in Greektown, Old St. Mary’s is downtown’s tourist church, well-preserved and known for reverent Ordinary Form liturgies. Around 200 people attended the Mass; more would have come, but parking was in short supply due to other downtown events, and many people returned home. Several parishioners remarked afterwards at the beauty of the liturgy and particularly the music provided by Windsor’s St. Benedict Choir. Old St. Mary’s had a million dollar pipe organ installed several years ago, and it sounded like ... a million bucks. Discussions are currently underway to arrange for future Tridentine Masses at the parish.

On All Souls Day, the Side Altars at Windsor’s St. Alphonsus Church were put to use for Holy Mass for the first time in 45 years. Fr. Danny Santos celebrated his first Holy Mass in the Extraordinary Form on the Sacred Heart altar [pictured], under which are the relics of St. Tegulus, a third century Roman martyr. 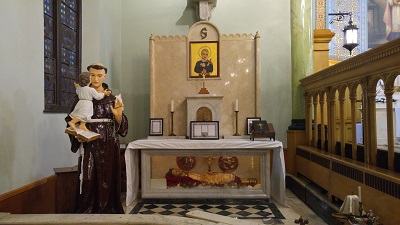 On Saturday, October 17, Dom John Tonkin was ordained to the Sacred Priesthood according to the Extraordinary Form for the Canons Regular of the New Jerusalem. The ceremony took place at St. James Church in Charles Town, West Virginia. The ordaining prelate was Bishop Athanasius Schneider; diocesan ordinary Bishop Michael Bransfield was in attendance at the throne. A number of Latin Mass luminaries were present, including Master of Ceremonies Msgr. Andrew Wadsworth [founder of the Washington, DC Oratory of St. Philip Neri in formation and head of ICEL, the committee responsible for the new English translation of the Ordinary Form], Deacon Fr. James Bradley of the UK’s Anglican Ordinariate; Abbot Eugene Hayes of California’s St. Michael’s Abbey; and Dominican Fr. Lawrence Lew. A complete set of photos is here: https://www.flickr.com/photos/36185987@N03/albums/72157660046529962 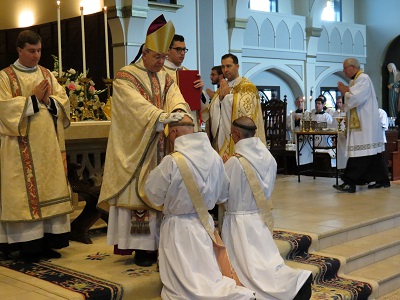 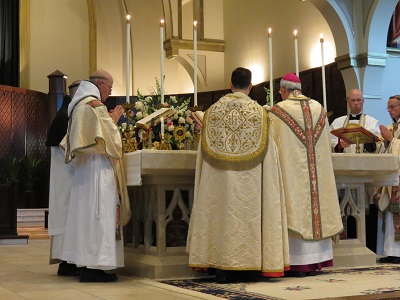 Dom John intends to return to our area before too long and celebrate homecoming Mass(es).