"WHAT IS THE MOST INSIDIOUS PROBLEM IN THE CHURCH IN TERMS OF THE ULTRAS? "

Sorry, now I'm okay. I think. It was just this photo. But I took a pill. I should be okay now. 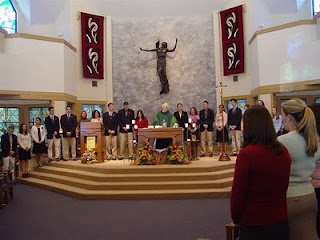 Sandro Magister of the blog Chiesa makes available the up until now secret meditation given by 87 year old Cardinal Prosper Grech of Malta, given to the Cardinals prior to the Conclave being locked to non-voting cardinals. You can read the entire The Last Warning to the Pope's Electors message by pressing this sentence.

The entire speech is very good, but the following insights are perceptive but a bit conditioned by the age of the Cardinal and his vision of Vatican II formed I am sure in the 1960's and 70's.

SMOKE OF SATAN IN THE CHURCH

The evil spirit of the world, the “mysterium iniquitatis" (2 Thes 2:7), constantly strives to infiltrate the Church. Moreover, let us not forget the warning of the prophets of ancient Israel not to seek alliances with Babylon or with Egypt, but to follow a pure policy "ex fide" trusting solely in God (cf. Is 30:1; 31:1-3; Hos 12:2) and in his covenant. Courage! Christ relieves our minds when he exclaims: "Have trust, I have overcome the world" (Jn 16:33).

No less easy for the future pontiff will be the task of keeping unity in the Catholic Church itself. Between ultratraditionalist extremists and ultraprogressive extremists, between priests who rebel against obedience and those who do not recognize the signs of the times, there will always be the danger of minor schisms that not only damage the Church but also go against the will of God: unity at all costs. But unity does not mean uniformity. It is evident that this does not close the doors to the intra-ecclesial discussion present in the whole history of the Church. All are free to express their thoughts on the task of the Church, but they should be proposals in line with that "depositum fidei" which the pontiff together with all of the bishops has the task of guarding.

My final comments: I think, as Pope Francis has said over and over, that Satan is the root of all the problems of division in the Church since Vatican II and the loss of Catholic faith in so many parts of the world, the most severe in Western Europe. The post on the so-called liturgy in Amsterdam that I had earlier is in a nutshell the problem of the Church and her decline and apart from the fault being laid at the feet of Satan, the problem also must be laid at the feet of "ultraprogessives" not ultratraditionalists.

The progressives of the Church were in charge and favored by the hierarchy in the 1960's and 70's. The damage done to the Church by these progressives during this period cannot be underestimated and is the foundation of the crisis in the Church today.

I could well have been a victim of the progressive nonsense of the 1970's and to a certain extent I was but a willing victim. My Catholic faith was not shaken or destroyed but adjusted and it has been adjusted especially from 1985 onward.

But I can tell you that my seminary class that entered St.Mary Seminary in Baltimore in the fall of 1976 was a large class of almost 60 students. By the end of the first year, that number was reduced to about 30 and by the end of the second year to about 25 and by the time we were ordained deacons to about 23. Of those 23 only about 21 were ordained priests after having been ordained deacons. Of those 21, some 33 years later, only 10, including me are still active priests, some have died but the most have departed the priesthood.

The first year departures lost their faith given the deconstruction of it in some of the classes they took, in particular Sacred Scripture. The others were converted to the progressive point of view and the trajectory for that led to all kinds of problems later, not the least of which was fidelity to their life long promises of celibacy and obedience. They loss their Catholic faith, embraced something else that was progressive but it didn't last the test of time.

The ones most susceptible to the loss of their Catholic faith were those who were considered pre-Vatican II in thought and devotion. They were given the hardest time, challenged the most and more than likely the faculty was glad to see them go. To say that traditional minded Catholics, lay, religious or priests were the victims of over zealous progressives in charge of deconstructing the Catholic faith at that time is an understatement.

I'm all in favor of Vatican II properly understood and within the hermeneutic of "reform in continuity rather than rupture." But let's face it, the most deleterious effect upon the Church was what happened in the 1960's and 70's that at that time divided families and pushed so many people away from the Catholic Church or made them marginal, not sure what to believe and thus became like reeds swaying in the wind. That trickle down effect until this very day has created the crisis that the good Cardinal points out in his speech.

This wasn't caused though by ultra-traditionalsist who do not destroy the content of the faith or her spirituality and devotional life but rather questions authority, even that of a Council and some popes, about the advisability of making Vatican II into a super Council when its goals were more pastoral than dogmatic and thus far from being considered infallible. Pastoral decisions by a Council while authoritative, can be revisited, especially if what is recommended fails and leads to progressives being in charge and destroying the content of the Catholic faith, her spirituality and devotional life to say nothing of the way in which they desire the Liturgy to be celebrated in stark contrast to what was inherited.

One is not an ultratraditionalist if one desires the EF Mass or the OF Mass celebrated in an EF way. One is not the problem if one would like to "restore" Holy Communion received kneeling and on the tongue. This restoration will in fact help the Church to recover some sense of sanity and make the new evangelization, which has to start in our parishes first, not elsewhere, successful.

Our own bishop has lamented how little our young know about the Catholic faith. The cause of this finds its foundation in the 1970's and the way parishes are today which are far from ultra-traditional but in a malaise of progressiveness run a muck with a veneer of doing what the Church expects in the post-Vatican II era.

Name me one ultra-traditionalist parish that is ignorant of the Catholic faith. Name me any other parish where ignorance is palpable especially amongst the young and not so young and name the reasons why.

Owing to the success of the minority of modernists secetly seizing control of the proceedings,
every debate on every document of that crummy council, V2 (the revolutionary rocket that destroyed Tradition), was suffused with the intent to keep a collective eye and ear on Ecumenism as though what Holy Mother Church believes and teaches ought be constrained by the idea that what we believe and teach might hurt the feelings of those who hath not God as their Father for they hath not the Church as their Mother and so we must be silent about that which divides us from those who reject us and only speak about that which we hold in common with those who reject the one true Church Jesus established.

Ecumenism is the universal solvent dissolving Tradition and it must have the stake of Tradition run through its heart.

And as for Dialogue, it was Iota Unum that demonstrated that prior to the V2, there were no words about dialogue in Magisterial texts.

Ecumenism is treated like a commandment chiseled in stone,
rather than a project that has fizzled and failed in Rome

Going therefore, teach ye all nations; baptizing them in the name of the Father, and of the Son, and of the Holy Ghost. Teaching them to observe all things whatsoever I have commanded you: and behold I am with you all days, even to the consummation of the world.

Cornelius a Lapide: Morally, learn here that it is a divine work of the Christian disciple and Apostle, indeed, of Christ Himself, to teach and convert all nations, even rude, rustic and barbarous ones. Whence S. Gregory (homil. 12 in Ezech.) says, “There is no sacrifice so acceptable to almighty God as a zeal for souls.” And Richard of S. Victor says, “I know not whether any greater benefit can be conferred by God, than that others should attain salvation through obedience to Him.” That saying also of Dionysius the Areopagite is well known, “Of all divine works, the most divine is to cooperate with God in the conversion of those who stray, and in the bringing back of sinners to Himself. Those whose bowels abound in charity [cf. 2 Cor. 7:15], imitate the communication of God’s goodness, and work with a pure love for the salvation of all, are rightly called godly and divine, indeed, utterly divine.”

Becoming inured to the Church's Inertia into Indifferentism is a grave and insidious problem.

Pope Francis said, "Do you need to convince the other to become Catholic? No, no, no! Go out and meet him, he is your brother. This is enough. Go out and help him and Jesus will do the rest.

"Your heart, when you encounter those in greater need, will start to grow and grow and grow," the pope said. "Encounters multiply our ability to love."

And, thus, the new evangelisation directly opposed to the commands of Jesus and Traditional Ecclesiological and Ecclesiastical praxis.

Don't know the context of the quote, but could it be that Pp. Francis meant that you, personally, do not need to be successful at converting someone to Catholicism - if you show proper charity, Christ will effect the conversion. Given that "Jesus will do the rest" it does not seem that he is implying conversion to Catholicism is not necessary, although yes, that can be an implication given the rather loose phrasing.

Dear C Matt. A triple denial that an appeal for conversion to Catholicism as part of our encounter with non-Catholics is convincing to me; perhaps you need more denials that is not necessary - but that is the way of newchurch -the praxis of Indifferentism.

As an aside, conversions are usually attributed to The Holy Ghost