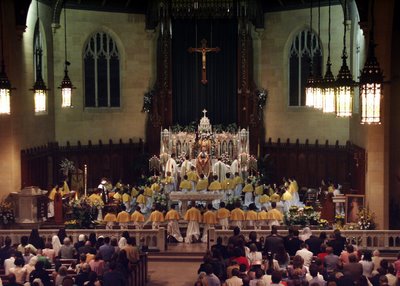 "I will go in unto the Altar of God
To God, Who giveth joy to my youth"
Tridentine Community News by Alex Begin (April 14, 2019):

Book Review: Phoenix from the Ashes

Much Catholic media attention has been given to the 2017 book The Dictator Pope, written by British historian Henry Sire under the pseudonym Marcantonio Colonna. It was one of a number of books published over the past two years critical of the current pontificate. Somewhat eclipsed by this book was Sire’s previous book, Phoenix from the Ashes: The Making, Unmaking, and Restoration of Catholic Tradition, published in 2015. It is appropriate to devote some attention to this publication, especially during Holy Week, as the book describes what might be thought of as a Passion of the Church.

A good portion of the book is devoted to esoteric and distant history, which won’t be of interest to every reader, yet which establishes Sire’s grasp of the various epochs in which the Church has existed. To this reviewer less interested in academic history, the book really picks up steam when it describes the pontificate of Pope Leo XIII and onward.

A tremendous amount has been written over the past fifty years about the work of Archbishop Annibale Bugnini, the architect of the New Rite of Mass. In this book, however, previously not well-known details are presented about how Bugnini operated, how he manipulated his colleagues, his superiors, and to some extent Pope Paul VI to achieve his objective of a dramatically different Mass experience for the Catholic faithful. Two paragraphs summarize the evidence presented succinctly:

“In the introduction of the new rite, Msgr. Bugnini, confident in the favour of the pope, again showed his astounding contempt for legal process. He had shown the text of the Mass, together with the instruction that preceded it, to the pope, who told him to submit the instruction to the Congregation for the Doctrine of the Faith, while he himself would examine the rite. Msgr. Bugnini simply disobeyed the order, and when the constitution Missale Romanum was submitted to the pope the latter signed it without reading the General Instruction. This doctrinal statement discarded the traditional eucharistic teaching and presented the Mass as a supper, a memorial, a meeting of the faithful. The betrayal of doctrine provoked reaction from those who had not yet despaired of orthodoxy. A Critical Study composed by a number of theologians was presented to the pope in September 1969 by Cardinals Ottaviani and Bacci, objecting on twenty-seven counts to the new rite and especially its doctrinal prologue. Pope Paul VI was informed of Msgr. Bugnini’s act of disobedience and the scandal it caused, and when he heard it was seen by Cardinal Journet to weep with shame and anger. As a result of the intervention, the General Instruction, though already issued with the pope’s signature, was withdrawn and amended to reaffirm the orthodox doctrine of the Mass. The rite itself remained unreformed and came into use in the ecclesiastical year 1969-70. ...

The story of how the liturgical revolution was put through is one that hampers the historian by its very enormity; he would wish, for his own sake, to have a less unbelievable tale to tell. The partisanship in choice of agents, the contempt for law and consultation, the blind support given by Paul VI despite every abuse, the silencing of the Church’s official organisms for the liturgy, the spirit of conflict in which the reform of the most sacred possession of the faithful was carried out, the advance of irreverence and impiety, the prompt discarding of principles that had been declared essential only a few years before, the discrediting and sudden departure of both the men to whom Paul VI had entrusted the reform of the liturgy, all these challenge belief. Moderation seems to demand rejection of such a story; but moderation is the wrong lens through which to judge immoderate events. That the reform of the Church’s liturgical life should have been bound up with such violations seems too hard to accept, but it can be explained by two facts: the first is the initial decision of Paul VI to hand over the reform to the most extreme wing of liturgical iconoclasts, and the second is the background of Modernist clamour that existed at the time. However they chose to act, the pope and his nominees needed never to fear criticism for actions that made for change, but only for laggardness in promoting it. This noisy chorus, claiming to be the voice of the faithful, represented a milieu filled with arrogance toward the sacred and towards Christian tradition. At their demand the religious treasure house of centuries was destroyed, while the ordinary laity, under the flood of innovation, lapsed from the Church in their millions. One day it will be necessary for the Church to study with honesty the way in which its liturgical heritage was done away with and to pass the judgment that it has pronounced in the past on grave deviations from its true nature and duty.”

One would have to do a fair amount of sleuthing to find objective evidence contrary to Sire’s. Those who defend the Ordinary Form usually cite a vague Vatican II / people’s drive for these changes but fail to acknowledge the protocol-defying means and intellectually questionable engine driving the Consílium, the Vatican body charged with creating the New Mass. Has anyone actually been a true, objective apologist for Bugnini and his methods? With the benefit of fifty years of hindsight, we must judge the new liturgy by its fruits. Meanwhile the Traditional Mass – resurgent in the midst of amazing opposition – continues to gain ground and speak to younger as well as older generations. Sire’s book goes on to document the decline in orthodoxy following Vatican II, then becomes optimistic as it describes the resurgence of tradition which many readers of this column observe and live every week.

Tridentine Community News - St. Mary of Redford Assigned to the Franciscans of the Holy Spirit; The Communion Rail and Complementarity; The Wooden Clapper; Tridentine Masses This Coming Week

"I will go in unto the Altar of God
To God, Who giveth joy to my youth"
Tridentine Community News by Alex Begin (April 7, 2019):

St. Mary of Redford Assigned to the Franciscans of the Holy Spirit

Along with St. Florian in Hamtramck, St. Mary of Redford is one of two local churches designed by famed Boston architect Ralph Adams Cram. Located on Grand River Ave. east of the Southfield Freeway, its now modest attendance gives little hint of its stellar past: During the 1950s St. Mary’s was one of the best-attended parishes in the Archdiocese of Detroit, with 4,455 registered parishioners, 10,000 in attendance at Sunday Masses, and 2,289 enrolled in the parish schools. In 1951 Msgr. Edward Hickey was assigned as Pastor, and he remained there past his retirement, living in an apartment in the bell tower. An avid sailor, art collector, and founder of the Cloister Gallery at Gratiot and East Grand Boulevard in Detroit, Msgr. Hickey was known for celebrating a clandestine, private Tridentine Low Mass in the 1980s at 6:00 AM weekdays at the church’s High Altar [1980s photo below]. In recent years, the occasional visiting priest has celebrated private Low Masses at a Side Altar of the still-grand edifice.

During the 1990s the church was semi-wreckovated. The High Altar was separated into pieces, its mensa now serving as the freestanding altar.

The Archdiocese of Detroit recently appointed Fr. Athanasius Fornwalt, FHS, as Administrator of St. Mary of Redford, effective in July. He will continue his role as Formation Director for the Franciscans of the Holy Spirit, whose brothers study at Sacred Heart Major Seminary; they will now reside at St. Mary of Redford. Readers of this column know that priests of Fr. Athanasius’ order celebrate the Ordinary Form ad oriéntem and have become regular celebrants of the Extraordinary Form as well. We hope to hear of good things happening at St. Mary’s, where the Franciscans will have the opportunity to rejuvenate this once-proud parish.

The Communion Rail and Complementarity

This column has many times noted the return of Communion Rails to many churches across the globe. Both construction of new Altar Rails and the putting of long-neglected existing rails back into use for their original purpose are on the upswing. On March 16, Fr. Jerry Pokorsky published an article in which he made several points in favor of bringing back the use of Communion Rails.

He argues that receiving Holy Communion while standing in a line makes the act individualistic, whereas the sight of the faithful kneeling at the rail is communal and does not encourage a hurried departure back to one’s seat.

One quote from the article stands out: “A priest senses the Communion rail and feels he is set apart from the assembly, even as he engages the faithful in prayer. He is more aware of his role as a mediator in Christ in prayer and worship.” How much more do these words apply if Holy Mass is offered ad oriéntem.

It is noteworthy that while Fr. Pokorsky offers the Ordinary Form in Latin at his parish of St. Catherine of Siena in Great Falls, Virginia [brand new stone Communion Rail there pictured above], the Traditional Mass is not offered there, so these arguments carry even more weight. The full article may be read here:

A notable reduction of the Sacred Liturgy during the Sacred Triduum is the suppression of bells. Where hand bells would ordinarily be rung, a wooden clapper called the crotálus is used instead. Bells denote joy, a sentiment which must be set aside as we recall our Lord’s Passion. The clapper instead produces a severe and somewhat startling sound, quite appropriate in light of our Lord’s sufferings. The bells are rung for the last time at the beginning of the Glória on Holy Thursday and will not be heard again until the Glória on the Easter Vigil; instead during that time period we will hear the stark crack of the crotálus.