"It's Hard to Be a Homo in Russia" 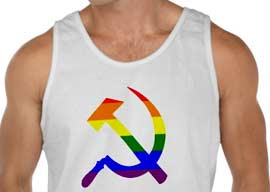 And now it's Mother Russia, her president Vladamir Putin, and Moscow Mayor Yuri Luzkov, who fear being contaminated by the baneful moral perversions of Western culture. Some might even think that Russia is becoming more "Christian" than America.

In his article, "It's Hard to Be a Homo in Russia" (Taki's Magazine, August 5, 2013), Jim Goad addresses the issue [Advisory: Taki's Magazine often allows vulgar language]:

A new Cold War is brewing between Russia and the West, but this time it’s being fought over the rainbow flag.

As the USA rapidly morphs into a continent-spanning version of Fire Island, a homo paradise where tiny fairy sculptors dream there will one day be a 90-foot statue of Harvey Milk wearing leather ass chaps and a butt plug on the US Capitol West Lawn, Russia is currently tightening its sphincter in stubborn resistance to All Things Gay.

Vladimir Putin, who is not averse to posing for vaguely homoerotic beefcake photos, has flexed his ample pectoral muscles in defiance of prevailing Western sentiments on issues such as immigration and anti-Christian blasphemy. And now he’s going after The Gays.

Putin is promoting the natural law family and the Orthodox Christian ethos in his country.
Compare with the Obama regime in the US.

Mr. Goad has supplanted P.J. O'Rourke as the wicked wit of the west.

I used to have a girlfriend
But I guess she just couldn't compete
With all of these cute little Cub Scouts
Who wear socks on their tiny sweet feet
Well I could probably find me a grown man
But I guess they're all in awe of me
Who cares? I never get lonesome
See the sweet boys in Cub Scout Troop B

I guess you could say I'm a Homo
A cowboy wearing leather ass chaps
Well, I could have a Fag Hag girlfriend
But I like boys who are taking a nap
Some folks say that I've gotta cute catamite
Hell, I don't even know what that means!
I guess it has something to do with the way
He looks in his skin-tight blue jeans