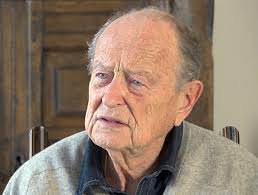 Jean Arfel (born 14 June 1920 in Libourne - dead 31 July 2013), better known by his pen name Jean Madiran is a French nationalist and a traditionalist Catholic writer, as reported by Wikipedia. He has also used the pen name Jean-Louis Lagor.

During the German occupation of France, he was the private secretary of Charles Maurras and was awarded the Order of the Francisque, the decoration, in the form of a stylised double-headed francisca, that was granted by Vichy France. He contributed to the newspaper Action Française. This was the organ of the movement of the same name and was published from 21 March 1908 to 24 August 1944.

Henri de Lubac points out in his book, The Drama of Atheist Humanism, that Charles Maurras, founder of the movement Action Française, rejected the Catholic Faith, although he admired and exploited many of its powerful symbols and traditionalist features for his politically conservative movement. Even Pope St. Pius X and Garrigou-Lagrange were supporters of Action Française because of its political defence of Church insterests.

Like Piux X and Garrigou-Lagrange, Jean Madiran is better remembered for his love and fidelity to the Catholic Church, which was the guiding motive of his political affiliations, regardless of how they may be construed in hind-sight.

In an article published in Itinéraires, Madiran declared:

If we are asked to state what we are and what our position is, our answer must be understood. Our answer modifies François Brigneau's formula or rather completes and develops it in its full truth: "We are to the right of the far right." This does not mean that we despise indiscriminately everybody and everything that official jargon calls "the far right". Here again we reject the arbitrary left-wing attitude that inspires and imposes a classification at variance with the truth. In reality there is no extremism, right-wing or other, in wishing a society based on "Work-Family-Fatherland",[3] "Serve God First".

His published works include two monographs on the philosophy of St. Thomas Aquinas, and numerous other works of Catholic cultural and social criticism.

Update: The man was truly a giant:"Anne Brassie is a teacher of literature. Yves Chiron an historian, both friends of Madiran. His spiritual father was the late Dom Gerard Calvet, the abbot of Barroux. Calvet had been Madiran's student. Dom Louis Marie is Dom Gerard's successor at Barroux as abbot. The funeral mass was at Versailles." [Hat tip to Sir A. Sistrom, who also furnished the update]
Posted by Pertinacious Papist at 9:44 AM
Email ThisBlogThis!Share to TwitterShare to FacebookShare to Pinterest
Labels: Catholic opinion, News, People, Politics, Traditionalism

In Pius X's day, the church was under attack by modernists and progressives. Some were ultimately totalitarian. But for many, perhaps the majority, the preferred form of government was liberal democracy of one stripe or another. Say what you will, Action Francaise was one of the few political forces that were NOT hostile to the Church.

Today, there is no Action Francaise, nor anything remotely like it. But there is still modernism aplenty, both totalitarian and democratic flavors, and rabid Muslim terrorism to boot. It strangles the authentic voices of Catholicism from within, like heart worms strangle dogs.

And that is ok with Pope Polyglot I, though it would be better, if only we could exterminate the handful of surviving "pelagian restorationists." Then it would just be him, Jesus Caricaturus, and his sinkful of dirty socks.

Oh sure, Zuhlsdorf, by all means, let's not do ANYTHING to jeopardize our prodigious gains!