John Senior: "We have lost"

"The crisis is over; we have lost. This is no longer just a prediction, it is a simple observation: Rome has been desecrated. We are in the age of darkness. Triumphalist reactions are in vain. The modern world and the Church deserve the punishment that God is raining down on us." -- John Senior. 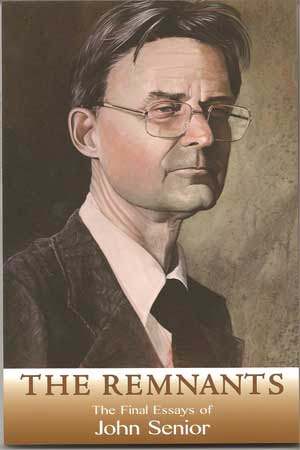 We found this short book has something for everyone, regardless of how long they've been traditional, or if they're even traditional at all. Any serious Catholic would benefit from the wisdom and history it contains.

Senior takes readers through the minds of thinkers like Newman, Virgil and Aristotle. He gives a blueprint on how to recapture Catholic life in the home and how to form young minds. And, because he lived it along with other traditional Catholic warriors like his friend Michael Davies and the late Walter Matt, readers get a glimpse into the dark days following the Council, and decisions many traditional Catholics faced with the Écône consecrations, the early days of Ecclesia Dei and the perhaps presumed choice between love of tradition and "obedience" to the current actions of those at the top of the Church.

What I find notable is his energy invested, not in merely cursing the darkness, but in offering a blueprint on how to rebuild Catholic life in the home and young minds. That I find very positive.
Posted by Pertinacious Papist at 11:12 PM
Email ThisBlogThis!Share to TwitterShare to FacebookShare to Pinterest
Labels: Catholic opinion, Decline and fall, Reconstruction

I love the cover art, which looks a bit like something from Lemony Snicket. LOL. And decidedly NOT like AmChurch!

I laughed today at this blurb on a new Ignatius Press book...

"...Among other topics, the Cardinal discusses his acquaintance with popes John Paul II and Benedict XVI, his experience on the Pontifical Council for Christian Unity, and ***his admiration for the youth today.***"

This got old even when new under Paul VI. See the comments on the misdirected adulation of youth in Amerio's "Iota Unum." Alone worth the price of the book. Meanwhile, Brumley's promised forum over at Ignatius Press on Blssd. Hans von Balthasar's confused ideas about Hell languishes in Limbo, behind the shadow of the Not-to-Be-Named book by Ralph Martin. Just poking the sleeping beast here, as I imagine Dr. Senior might approve.