"I will go in unto the Altar of God
To God, Who giveth joy to my youth"
Tridentine Community News by Alex Begin (June 5, 2016):

June 5, 2016 - External Solemnity of the Sacred Heart of Jesus

EWTN divides the year up into multiple week “seasons”, and in the current season they have designated Extraordinary Faith as a weekly series. In North America, Extraordinary Faith airs on Sundays at 4:30 PM and Wednesdays at 5:30 AM Eastern time. It airs on each of the other English satellite feeds – U.K. & Ireland, Africa/Asia, and Asia Pacific – at other times, which are listed on the Program Schedules page of the EWTN web site: http://www.ewtn.com/multimedia/weekly-schedules.asp

As a result of this frequent scheduling, we have the pleasant problem of not always being able to give you advance notice of upcoming airings. In this case, the latest two episodes of Extraordinary Faith – Episodes 10 and 11 – have already debuted on the network as of today’s date. Fortunately, EWTN has been rebroadcasting earlier episodes, so you will undoubtedly have the opportunity to see these episodes down the road if you have not done so already.

We were honored to have been granted a lengthy interview with San Francisco Archbishop Salvatore Cordileone, which constitutes the majority of Episode 10. His Excellency is well-known for his support of the Traditional Latin Mass and his belief that the Sacred Liturgy deserves primacy of attention in today’s Church. He delves into these subjects in detail in this interview. He also explains the circumstances around an unusual Tridentine Mass he celebrated in a cave chapel of a resort in Napa. 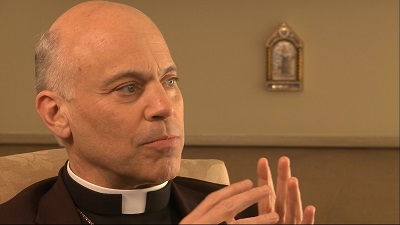 One of His Excellency’s first acts as Archbishop was to establish a premier Tridentine Mass site at a centrally-located historic church. We meet Fr. Mark Mazza, the then-pastor of Star of the Sea Parish, who had been tasked with starting up this Mass. Fr. Mazza explains why Star of the Sea was chosen and shows us around the church.

Finally we have a conversation with Brendon Ford, the Project Manager for the Benedict XVI Institute for Sacred Music and Divine Worship, another initiative begun by Archbishop Cordileone. Brendon explains the mission of the Institute, which is to provide support to both Ordinary and Extraordinary Form communities, to help them offer reverent liturgies in keeping with the mind of the Church.

Episode 10 will be posted for viewing on YouTube and on our web site, www.extraordinaryfaith.tv, around July 1. We encourage you to like the Extraordinary Faith page on Facebook, where we’re able to post up-to-the-minute info about the latest air dates as well as additional information about the people and places we visit. 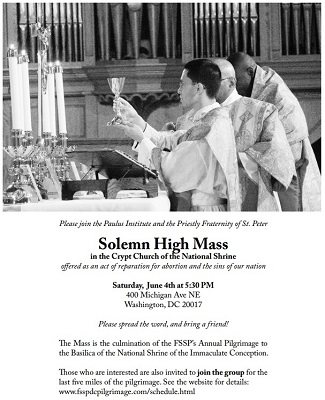 On Saturday, June 4, the Fraternity of St. Peter celebrated a Solemn High Tridentine Mass in the Crypt Chapel of the largest church in North America, Washington, DC’s National Shrine of the Immaculate Conception. This was one of the most prominent Traditional Latin Masses to be held at the National Shrine since the Pontifical Solemn Mass that was held in the Upper Church in April, 2010.

From the 1970s to the 1990s, the Crypt Chapel hosted a weekly Ordinary Form Latin Mass, but that was discontinued several years ago. In its place, Extraordinary Form Masses are held from time to time in the Lourdes Chapel on the lower level of the National Shrine; Juventútem DC among others arranges them there.

Joe Balistreri to Speak at OCLMA

Archdiocese of Detroit Director of Music Joe Balistreri will be the guest speaker at a reception after the 9:45 AM Oakland County Latin Mass Association Mass at the Academy of the Sacred Heart next Sunday, June 12. Joe is one of our region’s most active organists for Extraordinary Form Masses. His talk is entitled “How Firm a Foundation: Chant and Catholic Liturgy”. Joe will also tell us about an exciting new initiative being organized in the Archdiocese of Detroit.