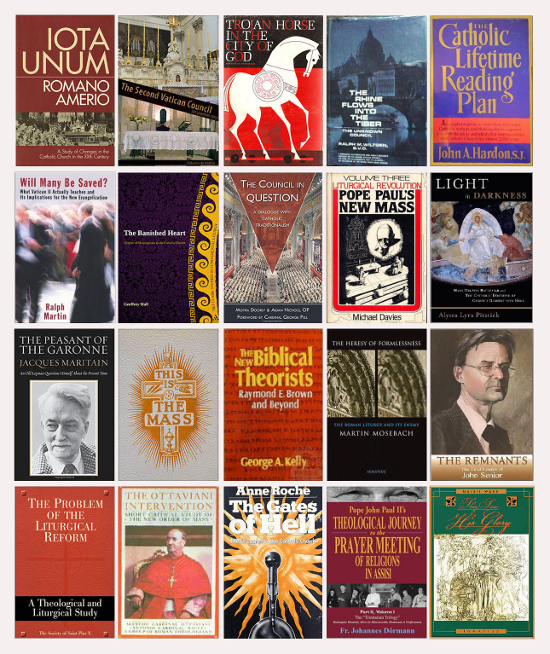 Posted by Pertinacious Papist at 7:41 PM
Email ThisBlogThis!Share to TwitterShare to FacebookShare to Pinterest
Labels: Books, Confusion, Signs of the times, Tradition, Traditionalism

I find the inclusion of "The Banished Heart" somewhat problematic. Crudely stated, Hull's thesis is that you can't impose foreign liturgical practices upon a culture. Because the 16th century Jesuits and the popes who backed them insisted on imposing the Universal Latin Mass upon the far-flung missionary cultures of the time, their efforts at conversion were doomed to eventual failure. And, as a further result, Hull concludes with a smidge of smugness, the liturgical meltdown that resulted from Montini's imposition of the novus confusio was the richly deserved result of the same authoritarian impulse. To put it simply, what went around in the 16th century came around in the twentieth century.

Hull's book has always been troubling to me. I used to be more accepting of his thesis, but as time has passed I have come to think that it is wrongheaded.

My problem with it is: you either accept that the universal Latin Mass is the universal Latin Mass, or you don't. If you don't, then you open the door to literally everything else everywhere. THAT is the liturgical lesson of V2 and its aftermath IMO. Hull's thesis that what happened in the first world when the doors, windows (everything but the drains) were opened in the sixties would NEVER EVER have happened in 16th century Asian missionary outposts had Jesuit missionaries been more accepting of harmless pagan novelties strikes me as an unproven and counter-intuitive assertion.

This is not a flat-out condemnation of Hull's book, which contains lots of good stuff. But it contains lots of other stuff as well, and in the end I would call it more "disturbed" than "great." My 2 cents.

I've already spent too much time in these comboxes tonight responding to Chris. But if you will indulge my brevity, I would compare Endo to Graham Greene. Both are great Catholic writers, but poor Catholics. In interviews about his Catholic faith, Endo comes off sounding like a liberal with a pretty shallow puddle of Catholic experience. Sometimes, he's not even clear about what he believes. Greene isn't altogether different. But like Greene, Endo's characters are Catholics that struggle profoundly with their faith. I think of Green's THE END OF THE AFFAIR and Endo's SILENCE (CHINMOKU, in Japanese). They are both terrific reads. Catholic issues are dealt with on a profoundly personal and moral level, even if their doctrinal substance is rather thin. I recommend them both.

I'd add David Wells' 1972 'Revolution in Rome' (IVP).
... esp. for evangelicals thinking of converting.
His observations/concerns ring true decades later, and as an outsider he was better able to reduce the Vatican II conversation down to what was actually at stake theologically (he's unafraid to point out the modernist tilt of Pope John and the practiced ambiguity of Ratzinger).
Reading him I was reminded of a depressing fact. The Church gives me reliably true teaching through her Tradition, but the same cannot remotely be said of any given set of Church rulers. All these people who convert because of an intense desire for a rock solid authoritative Church institution... don't. You will be wildly disappointed and finally have to pull some sort of Paul Ryan sellout to stay without sounding like a Traddie.