They fought one battle, and changed the world 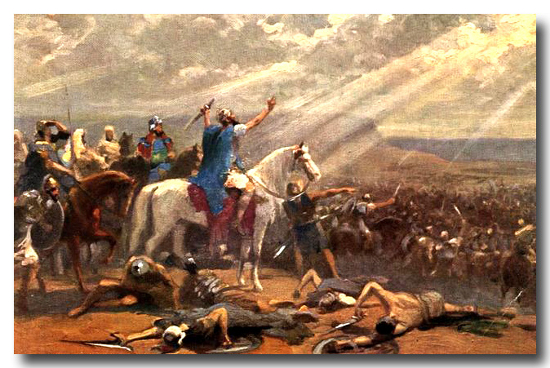 Commenting upon Joshua's battle against the Amorites at Gibeon, in which Joshua chased them along the road that goes to Beth Horon (which gives the Battle of Beth Horon its name -- not to be confused with the Battle of Beth Horon of AD 166), an early 20th century biblical commentator, Jessy Lyman Hurlbut argues, in his Story of the Bible (1932), pp. 154-155, that this battle (recorded in the 10th chapter Joshua) may have been the greatest battle in its effects in world history. Why? Not because it was the battle in which Joshua asked God to make the sun stand still so that he could finish the job. Joshua was in the process of undertaking the conquest of Canaan, and the Amorites were banding together against him. The author writes:

If ever in all the history of the world there was a battle when the sun might well stand still, and the day be made longer, to make the victory complete, it was that day more than any other. For on that day the land was won by the people of the Lord. If Israel had been defeated and destroyed, instead of Canaan, then the Bible would never have been written, the worship of the true God would have been blotted out, and the whole world would have worshipped idols. The battle that day was for the salvation of the world as well as of Israel. So this was the greatest battle in its results that the world has ever seen. There have been many battles where more men fought and more soldiers were slain, than at the battle of Beth Horon. But no battle in all the world has had such an effect in the years and the ages after, as this battle.