As reported by Rorate Caeli today, the "Cirinnà Bill" being debated in the Italian Parliament to allow "same-sex unions" in that central nation of Catholicism managed to bring Catholics from all over Italy to Rome this Saturday. 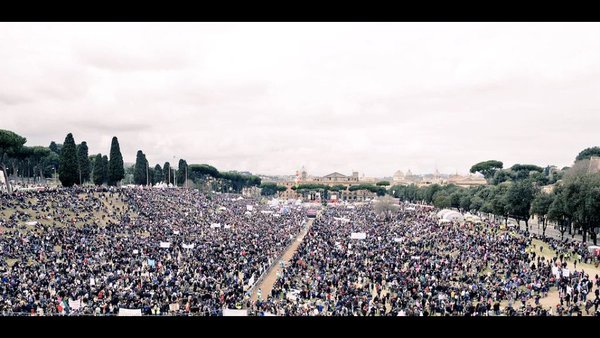 "The image from the Circo Massimo is unmistakable: on this 'Family Day', a huge multitude of Italian families (including many friends of this blog) gathered to protest the government's support of the counternatural bill."

There are those who are green with envy at yesterday’s immense and momentous Family Day, which, for the first time in Italian history filled up Rome’s Circo Massimo with no union, political or industrial organizational backing and no paid travel expenses. These were people who went to the Circo Massimo at their own expense, with enormous sacrifices, for an ideal, for their children, faced with a political class that has thrown ideals under the bus, seeing as it is only motivated by power. A political class that is quite incapable of representing these people and in reality, was never given any power by the electorate.

There are “ envious individuals” in the “Palaces of Power” (political, ideological and journalistic), but even in the palaces of ecclesiastical power, who did all they possibly could to defuse Family Day.

Suffice to say that in yesterday’s Osservatore Romano, there wasn’t even a line on the first page dedicated to this extraordinary event (the same in “La Repubblica,” Bergoglio’s other newspaper).

What were they observing at the Osservatore Romano not to have even noticed the mass of Christian people arriving in Rome? ....

The Argentine Pope made his debut in 2013 by saying that a shepherd has to take on the odour of his sheep, but yesterday’s event showed [clearly]that Bergoglio loves the perfume of the Scalfarian “parlours”* not the odour of the Christian flock....

Unfortunately yesterday, Pope Francis’ absence was very evident and his aloofness palpable. He was remembered [at the event] and most certainly a sign from him would have been welcomed with immense joy, but he didn’t even send a greeting to Family Day. And at his general audience that morning, not a word was mentioned about the Christian populace gathered together on the other side of the City.

Posted by Pertinacious Papist at 10:18 PM
Email ThisBlogThis!Share to TwitterShare to FacebookShare to Pinterest
Labels: Church and society, Culture wars, Homosexualism, Pope Francis, Signs of the times, State of the Church

Joke heard at dinner this evening (hatched by our guest):

What is the best way for an Islamic terrorist to go un-noticed in Washington DC? He should dress as a pro-life marcher.

Where was the priestly support for this? non-existent as far as I can tell. What exactly does the Vatican think it's doing when there is an outpouring of love for the children of Italy, concern for their future and their welfare, and the Church provides only vague gesticulations? Something is very wrong here.