This “roccia” (rock) will never crumble, nor flake, given that its solidity is guaranteed in the text of Matthew until the end of time. The “rock” remains and no one will scratch it, implicated as she is in a divine undertaking. But on occasion some men may take from others the vision of the rock. Other things may be made to seem like the rock, other things that may appear to all as such. The distinction is a profound one, even if the errors of these men are capable of veiling the reality (truth), they cannot destroy it. The question, easy for all, that presents itself is one of the visibility of the rock. If then situations should occur, that took from certain men the visibility of the “roccia” (rock) in the Church, the consequences would be grave. Those that convert to the Church, convert because they are convinced that they have found the “roccia” (rock), not doubt, hesitation, contradiction or doctrinal anarchy. One converts when one knows that ones hope is not futile. Taking away the visibility of the “roccia” (rock): what happens? (emphasis added)

What happens? Indeed. As a weary Guy Noir writes, "Discouragement, fatigue, and finally doubt as to whether the Church or any religious ideas matter much at all in our Era of Grand Syncretism."

Well, I have no doubt that the Church, in the final analysis, matters very much, because the deposit of the Faith received via Sacred Tradition remains very much intact no matter what the vicissitudes of our current storm. But do not be deceived, the theological shenanigans we have seen over the last decades do take their toll and cannot be justified or papered over by means of facile smoke-and-mirror 'explanations.' The damage is real.

Noir goes on to point out what he calls "a sobering if not anesthetizing remedy" from John Senior's book, The Remnants - the "Final Essays" of John Senior, a Columbia University grad who co-founded the Integrated Humanities Program at the University of Kansas, and was Professor of English, Comparative Literature, and Classics at Cornell, among other institutions. Here I quote him just as I received his words from Noir: 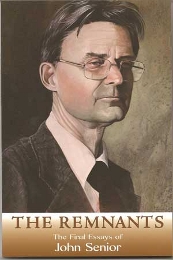 We are under the authority of theologians who deny the laws of contradiction, sufficient reason, and cause/effect. They really believe that the dialectical philosophy of Marx and Engels can be reconciled with Christian revelation. In practical management this means a zig to the right and a zag to the left while steering for the Norvus Ordo Saeculrum. Chop off Lefebvre, and throw a sop to trade... They have refused the face the issue -- which is not nostalgia... but the shipwreck of the Catholic Church. I mean a new Mass, a new catechism, a new morality, a flagrantly mistranslated Bible, an architecture and music which constitute a thoroughly orchestrated and rehearsed attack on Catholic doctrine and practice. Read the papal statement ten times if you can. You don't need arguments. It constitutes itself proof of its own radical insincerity. It cannot be explained away as a misunderstanding of the issue; it is quite simply a misrepresentation... This pseudo-Church, imposed upon the real subsistent one since the Vatican Council, is like [a] glass confessional. Anyone can see -- and everybody does -- that whatever it is, it is not the Church of our Fathers.

The Roman Catholic Church today is like the Fuller Brush Company: a corporate sales force peddling products about which no one gives a royal damn, least of all the salesmen.

Amen. It is a Shadow Church (shadows lack substance) and the new Mass was created by revolutionaries to propagandise their revolutionary message to the man in the pew -that man is the center of everything - and all the while Ecumenism, the Universal Solvent of Tradition, continues to make forbidden what once was Holy, not only an aberration not a sinful aberration.

The haughty new theologians/revolutionaries know objectively that they are reducing the church in its size and authority but they are convinced it is a necessary good that it be done.

Look at Franciscus, Our Pope and Our Cross, and consider the men who elected him, they are every bit as bad as he is for they KNEW who he was when they elected him; they knew his past and his praxis and they had to know his Creed for he is so glib and yet the elected him to be the face of the Church in this epoch.

ABS has known for a long time that he has been abandoned and more and more men are coming to that same conclusion and the more books/studies/monographs that are written describing and decrying the destruction the weirder the hierarchy becomes and one is constrained to conclude that the Hierarchy, as a whole, has a Creed similar to what Fraciscus has and , thus, the worst is still yet to come.

And now we have prayers honoring Martin Luther and we are naming Roman Plazas after him and we are thanking him for his spiritual insights etc even though that Heresiarch was a Saint Augustine-hating fat vow-breaking jew-hating drunk who said that Jesus is a composition of good and evil.

Well, the Hierarchy can go to Hell but they ain't bringing ABS with them or chasing him out of the church; they can have his real Creed when they pry it out of his dead brain AFTER they have been forced to dispense Extreme Unction on him.