"I will go in unto the Altar of God
To God, Who giveth joy to my youth"
Tridentine Community News by Alex Begin (June 21, 2015):

It’s always edifying and inspiring to attend one of the major international liturgical conferences. This month’s Sacra Liturgía USA gathering in New York City was no exception. While not exclusively Tridentine-focused, the conference intellectually leaned in the direction the Extraordinary Form. Academics are becoming ever more convinced that the EF is a more expressive form of Catholic worship. 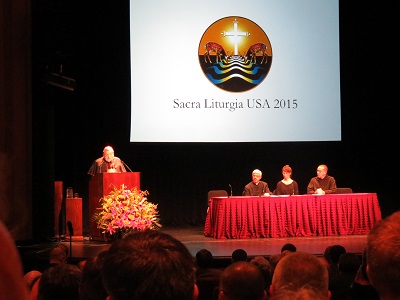 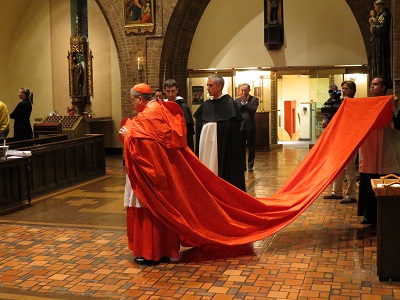 Major events benefit from having a star, and Sacra Liturgía’s was unquestionably His Eminence Raymond Cardinal Burke. No Prince of the Church of recent decades has done more to advance the cause of traditional liturgy. His Eminence delivered the keynote address on the subject, “Beauty in the Sacred Liturgy and the Beauty of a Holy Life.” He also presided at Solemn Vespers in the Extraordinary Form, wearing the cappa magna (pictured).

Dom Alcuin Reid, the co-founder of Sacra Liturgía and one of the most renowned living scholars on the sacred liturgy, presented a history of the controversial Holy Week reforms of 1955, along with a carefully crafted argument in favor of them. He provided evidence to debunk popular myths about how they came about.

Fr. Christopher Smith, pastor of one of North America’s largest traditionally-oriented parishes, Prince of Peace in Taylors, South Carolina, explained how he has formed his parishioners to appreciate faithful liturgy. Dr. Michael Foley elaborated on the reforms of the liturgical calendar in the OF which regrettably eliminated some of the “recapitulation” of feasts present in the EF.

This author was particularly intrigued by Dr. Peter Kwasniewski’s talk, “The Reform of the Lectionary”. He reiterated the point made in this column in the past that the EF actually contains more Sacred Scripture than the OF, both in the Ordinary (the unchanging parts) of the Mass, as well as in the mandatory use of Propers. He pointed out that offsetting the OF’s expanded three-year Sunday and two-year weekday lectionary cycle, the OF actually suppresses certain passages of scripture that the liturgical reformers considered too controversial. For example, nowhere in the Ordinary Form readings is the passage contained in the Epistle for Corpus Christi in the Extraordinary Form which states, “For he that eateth and drinketh unworthily, eateth and drinketh judgment to himself, not discerning the Body of the Lord.” Dr. Kwasniewski coined an interesting term for this phenomenon: “Doctrinal attenuation”. 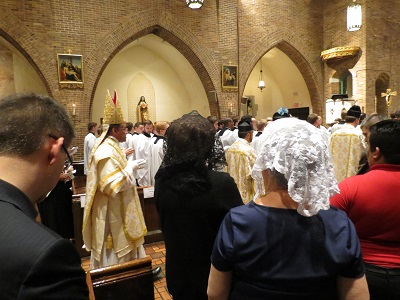 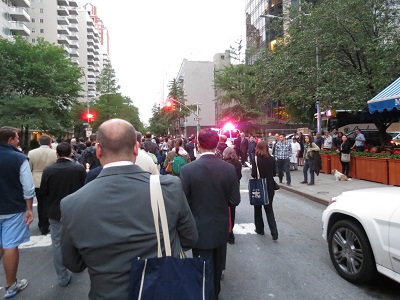 Liturgically, the conference was stellar. Under the direction of Dom Alcuin Reid, arguably the world’s most expert Master of Ceremonies, the week’s liturgies were executed at the highest rubrical standards. A particular highlight was Pontifical Solemn Mass in the Extraordinary Form for the Feast of Corpus Christi, celebrated by Chicago Auxiliary Bishop Joseph Perry. Over 125 priests and seminarians were in attendance, along with hundreds of lay faithful. Mass was followed by a Eucharistic Procession through the streets of New York. The crowd processed from St. Catherine of Siena Church to St. John Nepomucene Church to St. Vincent Ferrer Church, where the concluding Benediction was held. Police blockaded the streets, including major intersections at 1st and 2nd Avenues. Several locals remarked on the peaceful, reverent atmosphere.

Cardinal Burke granted the exclusive press interview at the conference to our crew from Extraordinary Faith, who shot portions of the conference and obtained interviews with several other speakers. Look for the broadcast of our New York episodes in mid-2016.

Interested in experiencing this sort of conference for yourself? Sacra Liturgía 2016 will take place July 5-8 in London, England, at a location to be announced in September.