Hear, hear! "It's time for Catholic prelates to speak as true Catholics" 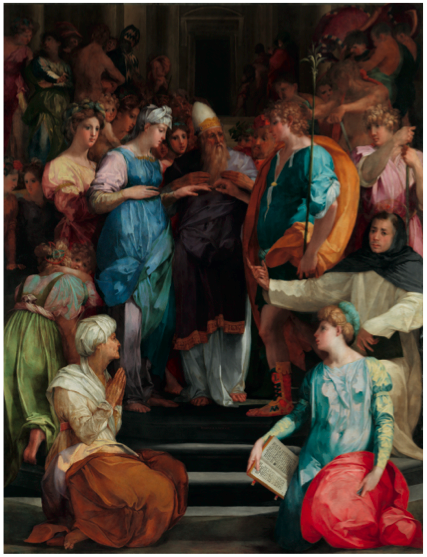 Rosso Fiorentino
The Marriage of the Virgin
Basilica of San Lorenzo, Florence


Since the promulgation of Obergefell v. Hodges, the decision of the Supreme Court of the United States on the definition of State-defined marriage, a growing number of U.S. Catholic prelates have been issuing their own statements about this abominable decision by five justices of the Court (two of whom are baptized Catholics, including the majority opinion's author himself). Some forthrightly condemned the decision's injustice and immorality. Others restated Catholic doctrine clearly, but without the forcefulness clearly warranted by the situation. Others offered decidedly lukewarm, limp-wristed statements that repeated a minimum of orthodox doctrine in as inoffensive and unconvincing a manner as possible, while tacitly accepting elements of the new secular orthodoxy and undermining what resistance towards it is left among Catholics.

The most symbolic statement was that of the new Archbishop of Chicago, Blaise J. Cupich, as lukewarm and limp-wristed as can be imagined. Let no one be fooled: behind the façade of equanimity, this statement represents capitulation, pure and simple: 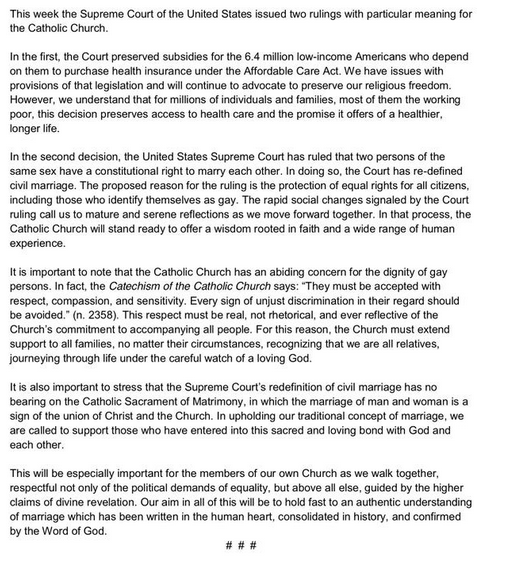 Precisely because a one-page statement cannot include everything that needs to be said, what Archbishop Cupich has chosen to say assumes greater significance. He has chosen to say precisely the things that will not only help our adversaries but also whet their appetites further. By repeating (without qualification or refutation) the claim that this decision is about "equal rights for all citizens" and "the political demands of equality," and that this is all about "civil marriage," Archbishop Cupich concedes key grounds to the homosexuals and their drive to fence off public life for themselves and their faithful servants. This makes him complicit in the exile of Christian principles from public life and the reduction of the Church to a merely private institution, content as long as its sacraments are untouched, and as long as it is graciously permitted to keep its beliefs.
Indeed, he says nothing about the grave harm that "gay marriage" has inflicted and will inflict on religion and society as a whole. We say "religion" because we have no illusions about where the "gay marriage" juggernaut will end. Homosexual activists will not be content with civil "marriage" -- they will not be content until they have managed to defile even our sanctuaries with their perverse "nuptials."
It is all the more distressing, then, that in the middle of the vitriol and genuine hatred being poured out by the "gay lobby" against Christ and His Church, Archbishop Cupich chooses to focus on lecturing Catholics to "respect" homosexuals.

By putting the bulk of their efforts into lecturing the Catholic faithful about the need to be "welcoming," "respectful," "charitable" and "kind" towards the homosexual lobby, not a few prelates and clerics play right into the homosexual playbook. It is even more heart-rending that many "conservative" and "traditionalist" clerics, perhaps due to fear, are joining the bandwagon of niceness by distancing themselves from "harsh" Catholics, whose only "harshness" lies in using language that would have been mild and normal for Catholics until the 1960's.

By legitimizing the false homosexual narrative of "victimhood" by "harsh, uncharitable and cruel" Catholics and other Christians, they implicitly concede that the homosexuals have the right to define who is the victim and who is the oppressor. This will only make it harder, if not virtually impossible, for our brethren to continue standing up to the new "orthodoxy" that the American State now wishes to impose.

For the "gay lobby," any statement of Catholic orthodoxy is by definition "hateful" and "harsh." Any sign of opposition against their demands is a form of "bigotry" that must be dealt accordingly with increasingly stringent legal measures -- with the next most likely step being the stripping of tax exempt status for religious institutions.

The homosexual lobby will not be content with anything less than the full rejection of Catholic doctrine on sexuality and the acceptance of their beliefs as the new, fabulous orthodoxy. They will exploit any sign of weakness, any sign of surrender, as openings to press more and more outrageous demands, secure in the knowledge that our side has little real stomach left for a fight.

The reality is that in the past few decades, Catholics have rendered great respect to homosexuals and the followers of various erroneous if not perverse ideologies and doctrines, to the extent of sacrificing the militancy that the defense of the truth rightfully requires. If the Church had fought homosexual pseudo-marriage with half the militancy with which it used to resist godless ideologies only a few decades ago, not a single Western country with an appreciable number of Catholics would have legalized this perversity -- at least not without Catholics first daring genuine martyrdom in vast numbers.

And yet, faced by one defeat after another, the only solution that so many Catholic prelates -- including Pope Francis -- can see is to insist on avoiding "hurtful" and "offensive" language even more. In the infamous words of the Synod of 2015's Instrumentum Laboris #78, language that is "clear and inviting, open, which does not moralize, judge or control" is the demand of the Church, not just on the Church.

This is the language of a Church that refuses to fight, refuses to stand up for its Faithful, and that will sooner rather than later find itself thrust back into the catacombs. The Church will now be in the closet.

Cupich in Chicago... I wonder if he would ever counsel a gay man to leave his husband? In a word, doubtful.