"I will go in unto the Altar of God
To God, Who giveth joy to my youth"
Tridentine Community News by Alex Begin (April 5, 2015):

It is said that good things come to those who wait. God has certainly given the gift of patience to Deacon Brother John Tonkin of the Canons Regular of the New Jerusalem. Having entered religious life many years ago, first with a Franciscan community and then moving on to the fledgling CRNJ, he will at last be ordained to the sacred priesthood. His Ordinary, Bishop Michael Bransfield of the Diocese of Wheeling-Charleston, West Virginia, has granted permission for the ordination to be performed according to the Extraordinary Form. The ordaining prelate will be Auxiliary Bishop Athanasius Schneider of Astana, Kazakhstan, one of the world’s most prominent advocates of traditional liturgy.

Deacon Brother John, pictured at left in the below photo, hails from Windsor and was one of the original altar servers for the St. Benedict Tridentine Community in the 1990s. He regularly visits our Masses during his trips home. 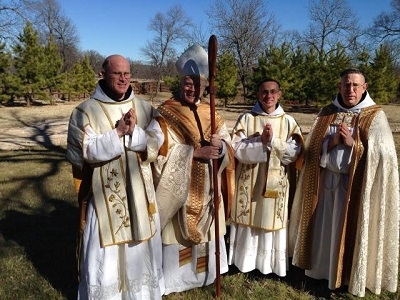 Deacon Brother John invites all readers of this column to attend his ordination on Saturday, October 17, 2015 at St James Parish, Charles Town, WV. The time and additional details will be announced as the date approaches. Charles Town is one hour and twenty minutes outside Washington, DC. Dearborn’s St. Alphonsus Church

This past Tuesday’s funeral for Terry Klink was the second time that Dearborn’s St. Alphonsus Church has hosted a Holy Mass in the Extraordinary Form in recent years. Previously Juventútem Michigan had held a Mass there.

In contrast to some of the high-profile historic downtown churches, St. Alphonsus does not receive much publicity. However, its grand scale, impressive architecture, and excellent physical condition merit attention. The church still contains a High Altar, Side Altars, Communion Rail with kneeler pads, High Pulpit, and traditional confessionals. Religious symbolism abounds. In 2010, pastor Fr. David Lesniak commenced a restoration project that included painting the statues that adorn the High Altar, seen below. Well worth a visit. 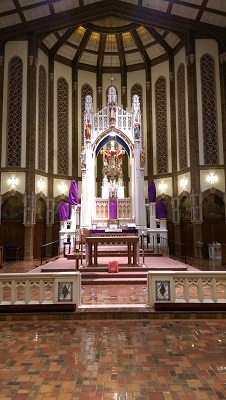 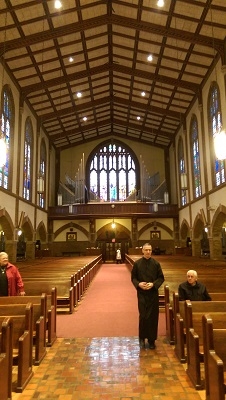 High Masses During the Easter Octave

As the below schedule indicates, there will be Tridentine High Masses this Easter Week on Tuesday at Holy Name of Mary Church in Windsor and Friday at St. Joseph Church in Detroit. High Masses are offered on Tuesdays at Holy Name of Mary on Feast Days on which a Gloria and Credo are specified. Friday’s Mass is part of the Prayer Pilgrimages Bus Tour of historic Detroit churches, but all are welcome to attend the Mass, whether or not you are on the tour. Speaking of which, congratulations are due to Prayer Pilgrimages director Michael Semaan, who has arranged for two buses of pilgrims to join this week’s tour from the Diocese of Saginaw, Michigan. As Mike has proven again and again, there is broad demand for experiencing the treasures of our Catholic architectural and artistic patrimony, if people are only made aware of the opportunities.