The endlessly insightful Newman - and Jaki on Newman

A well-read polyglot and good friend writes (and I publish his words with his permission):

I discovered Fr. Jaki on Newman in my favorite magazine, Christian Order, in 2002. I immediately ordered a copy of Newman to Converts. When I asked Fr. Ian Ker about it he wrote: "While Fr. Jaki is an expert on science and religion, he knows nothing about Newman". With that endorsement, I never looked back and ordered all five of Fr. Jaki's books on Newman one by one: Apologetics, Church of England, Neo Arianism, Justification and Challenge.

No books in my long life as a Catholic (nurtured on Ronnie Knox and Christopher Dawson) have given me such pleasure. Fr. Jaki notes that Newman believed that only in his letters does a man reveal himself. Newman is combative. His Anglican Difficulties is a satire on the Church of England. His book on the Arians is the only place you will learn why the Arians were such a threat and not dialogue partners as Rowan Williams would have it.

It is a scandal that these books have never been reviewed in the principal theology journals. The carefully constructed portrait of Newman the Anglican is blown sky high by the reality of Newman the Catholic. The fact that Fr. Jaki's books on Newman were self published is no excuse. They are the best books on theology to be published in my lifetime and all appeared in the new century.

I [must also] mention that you would probably find Fr. Jaki's Apologetics as Meant by Newman the most interesting as it deals with the Grammar of Assent, the marks of the Church, and the idea of a university.

I discovered today a really interesting article [by Deborah Ostrovsky], "The Freudian Became a Catholic" at the Tablet, a Jewish journal published in London. I've always felt a kinship with Karl Stern, who was welcomed into the Church by the same Montreal Franciscan priest who married my grandparents.

Where you can order the late Fr. Stanley L. Jaki's books on Newman (and a whole lot more!): Real View Books. 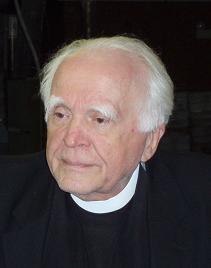 Stanley Ladislas Jaki (1924-2009), a Hungarian-born Catholic priest of the Benedictine Order, was Distinguished University Professor at Seton Hall University, South Orange, New Jersey. With doctorates in theology and physics, for over forty years he specialized in the history and philosophy of science. The author of over fifty books and over three hundred and fifty articles, he served as Gifford Lecturer at the University of Edinburgh and as Fremantle Lecturer at Balliol College, Oxford. He lectured at major universities in the United States, Europe, and Australia. He was an honorary member of the Pontifical Academy of Sciences, membre correspondant of the Académie Nationale des Sciences, Belles-Lettres et Arts of Bordeaux, and the recipient of the Lecomte du Noüy Prize for 1970 and of the Templeton Prize for 1987.