Another George: Read my lips, no change in doctrine 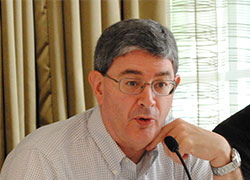 Back to carrier pigeons again from Guy Noir - Private Eye, who sent us the link to George Weigel's piece, "Things That Can't Change" (First Things, March 29, 2016) with these words:

George Weigel. Both very good and very, very limited in his sight when it comes to Vatican II.

Noir singles out the following excerpts:

"When the Second Vatican Council was putting the finishing touches on one of its key documents, the Dogmatic Constitution on the Church (Lumen Gentium), Pope Paul VI proposed that it include a statement that the pope is “accountable to the Lord alone.”

The suggestion was referred to the Council’s Theological Commission, which, perhaps to Pope Paul’s surprise, flatly rejected it: the Roman Pontiff, the Theological Commission noted, “is . . . bound to revelation itself, to the fundamental structure of the Church, to the sacraments, to the definitions of earlier Councils, and other obligations too numerous to mention.”

Noir writes: "This is heartening. But then this":

"By declining Paul VI’s suggestion about a papacy “accountable to the Lord alone,” Vatican II made clear that there are limits to what popes can do. On the bottom-line matters at issue in the two recent Synods, for example, no pope can change the settled teaching of the Church on the indissolubility of marriage, or on the grave danger of receiving holy communion unworthily, because these are matters of what the Council’s Theological Commission called “revelation itself:” to be specific, Matthew 19.6 and 1 Corinthians 11.27-29. Nor has Pope Francis indicated in any public statement that he intends any deviation from what is written by revelation into the constitution of the Church." [emphasis added]

No. He hasn't. In fact he has tartly reminded hearers he can recite the Nicene Creed in good faith. That would be reassuring. Only as John O'Malley has long argued, Vatican II was a "language event." The teachings don't need to be "changed," if they are verbally compromised by language games and pastoral gamesmanship. They can remain chiseled in stone for all to see, but if the people reading and affirming them apply different meanings, what does it all matter.

With communions for a moment, and witness the longstanding argument about whether Mormons are Christians: "Whatever do you mean. Just listen to their orthodox affirmations! And of course they no longer practice polygamy!" When they mean very different things by shared vocabularies, and they in fact do teach polygamy...

This may sound like a huge leap, but I don't think it is quite that huge. We already have a Catholic like Stephen Webb holding up Moron Christology as helpful! If mortal sin and worthy reception are remotely apprehensible concepts, the proposed pastoral changes are the same sort of linguistic slight-of-hands. Enabling people to receive communion unworthily is not merely unhelpful but unscriptural.

As is, ironically, much of the current theological verbalese on Scripture. For the umpteenth time I suggest anyone interested read the last couple of chapters of George Kelly's The New Biblical Theorists to witness in what short time the "orthodox" ideas about Scripture, based on 1960s conciliar rhetoric, have fundamentally shifted to allow familiar phrases to mean unorthodox things. The concern of conservatives for the last fifty years has been about officially maintaining doctrine, yes, but also about the teaching and reception of gospel truth. The problem of the last fifty years is that ever since Vatican II those two categories can be talked about as two separate things. And that is why all the reassurances of George Weigel sound very much like the reassurances of another George saying 'Read My Lips: No New Taxes.'