"Coincidence or the real Francis effect? The collapse of vocations in Buenos Aires and all Argentina from the 1990's to the present." 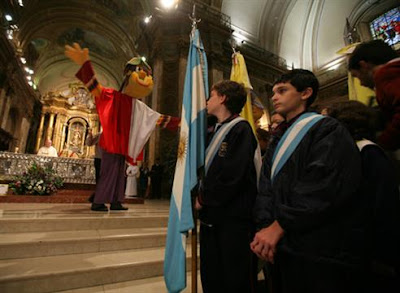 A scene from the annual "Mass for Education" celebrated by
then-Cardinal Bergoglio in his cathedral in 2010. (Source)

Rorate Caeli (March 8, 2016) reports: "The website of the Organizacion de los Seminarios de la Argentina has comprehensive statistics for major and minor seminarians in the country from 1997 to the present (ESTADÍSTICAS COMPARADAS). The rapid and unrelenting collapse of vocations is unmistakable ..."

Summarizing the data provided on their website, here's what we see:

More of the same. Cardinals swoon over a fellow cleric who has zero track record of discipling with any clear results. "He's such an awesome leader!" Except his only ardent followers are out-of-touch priests, and he becomes the toast of liberal media while the faithful feel adrift. Sounds for all the world like... like the walking, talking personification of Vatican II.The new papacy and the post-cociliar Church, neither are false, just impotent. That almost seems like a harsher judgement.

People need to stop and actually look at the photo...

The picture strikes me as a sacrilege.