Hard on the heels of the just posted article, "Disappointment with Louis Bouyer's Memoirs" (Musings, March 4, 2016), come these potent ruminations from our underground correspondent from an Atlantic seaboard city that knows how to keep its secrets, Guy Noir- Private Eye:


As you know, I have a sentimental attachment to The Spirit and Forms of Protestantism, and hence to its author Louis Bouyer. He was pivotal in my conversion.

I have made an effort to read most of what he has written. Even his commentary on the Gospel of John, authored pre-conversion, which finds him at that point more mainline liberal than backwoods Baptist, so to speak. His work is easy to read but hard to categorize (in his forgotten Dictionary of Theology, he even affirmed the poena sensus [pain of sense] -- in Hell -- as if anyone can say that now, much less explain or defend it!) 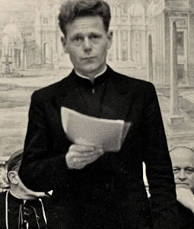 For years, rumors of his memoirs circled. He'd supposedly mandated they not surface for a period after his death, so watchers assumed there were broadsides or bombshells worthy of anticipation. Given this was a man who knew Ratzinger, Tolkien, Küng (he was his doctoral advisor!),

Bugnini, von Balthasar, etc, and yet who also wrote The Decomposition of Catholicism, for crying out loud.

But slow down a minute ... did you not just read of the associations with JR and HvB? He also supported the start up of and was praised by Ignatius Press... Maybe someone can see some very faint but strange pattern... Great guys all, no doubt, but would you expect Fr. Joseph Fessio or any one of them to strike a note that would offend any reigning pontiff or Vatican City commission. Remember:

And so we move the anticipated  and  published memoirs, issued now in, yes, two rival translations! This while The Last Writings of Reginald Garrigou Lagrange languishes out of print. Well ...

But Bouyer's of course memoirs have been hyped. A whole lot. And yet -- surprise or no -- there is essentially just not much there. Pretty much Nada. He is the French Catholic version of Karl Ove Knausgård, prolix but revealing little other than he knows himself to be himself. 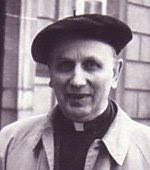 Though I am now uncertain, I can't even recalling him much mentioning the name 'Jesus.' Or much else. Other than French provincial scenes and an early doomed romance that pushed him to the ministry. Some of this might be a generational or Catholic culture thing. Or French thing. But regardless, in verbosity and density it too much seems akin to the documents of Vatican II.

I look over at the memoirs of Congar and DeLubac and

Ratzinger, and am struck by the fact that to my more 21st century sensibilities, none of these guys' writings or memoirs have that much defined shape -- not a one. That may explain the new generation of saints bequeathed us in soft focus.  If you are looking for clearly defined doctrine, Rome may no longer be the place to be. But read on. Amy Welborn had a similar reaction to mine in more muted tones: "These are the memoirs of a defining theologian? Odd."

[Meanwhile, get and read The Spirit and Forms of Protestantism. Who cares if it was a grace-induced inconsistency: grace-filled it will undeniably seem to be, to any Protestant considering Rome and any Catholic considering his heretical kin.]

I wonder what Bouyer's thoughts on Charles Maurras were.

Dr. Lamont, I've got to get a copy of that article!

Ecclesiastical Masonry?
How could none of them know that physically we cannot see people saved without the baptism of water?
Was it ecclesiastical masonry at Baltimore and then Boston and then finally Vatican Council II?
And the Catechism of the Catholic Church (1992) went along with the error?

When reading Vatican Council II we have to de condition ourself and then the Council is traditional and rational
http://eucharistandmission.blogspot.it/2016/03/when-reading-vatican-council-ii-we-have.html

Is not the theology taught by Dr. Lamont in Australia approved by the Masons ? It has the approval of the Jewish Left and so he retains the mandatum to teach theology ?

He uses an irrationality to interpret Vatican Council II and assumes hypothetical cases mentioned in the Letter of the Holy Office 1949, are objective exceptions to the tradtional interpretation of the dogma extra ecclesiam nulla salus.
I have mentioned this many times on my blog. I have also specifically mentioned Dr. John Lamont by name. He has nevr denied what I have written or commented upon it.

You don't get out much do you. Do you? What's the last time you've gone to an art gallery, a symphony concert, a movie? Have you read a novel lately? Just curious.

You don't get out much do you. Do you? What's the last time you've gone to an art gallery, a symphony concert, a movie? Have you read a novel lately? Just curious.

Tiny Tim:
I have a simple life.When I was younger I would make time for many of these things in which I was interested.
I now live contented below the poverty line.I do not have the distraction of having to ask for donations or worry myself with the usual things which pre occupy people who are still interested in concerts etcs.

I am single and choose a life of silence and I focus on EENS. Aside from my daily prayers and meditation and evening Mass, this is my main activity until Catholics, like Dr.Lamont can pick up, from what I have been saying and doing.

However there has been no comment to my blog posts from Dr.Lamont, Prof. Pink and the LMS Chairman who all teach theology and interpret Vatican Council II with irrational Cushingism instead of traditional and rational Feneyism.Thier theology is based on an irrational inference.It makes the Council non traditional but politically correct, to receive the mandatum from the bishop to teach theology.

Also when I ask basic questions like can we physically see people in Heaven saved with ot without the baptism of water I get no reply.Then when I mention that we physically cannot see or know any such case so there are no explicit exceptions to the dogma extra ecclesiam nulla salus there is no comment from the St. Benedict Centers or the SSPX or the traditionalist theologians.Recently they held another conference in Italy reported by Rorate Caeili in which they repeated the liberal and politically correct interpretation of Vatican Council II.

You will have noticed that suddenly there is no comment here from Dr.Lamont. He obviously knows what I am saying but chooses not to address the issue.

He knows that the Magisterium and Archbishop Lefebvre assumed there were known exceptions to the dogma EENS and this is a mistake being made in general in the Church. It was a mistake in the Letter of the Holy Office 1949 which was accepted by the magisterium.

So how is he going to to say that Vatican Council II does not any where contradict the strict interpretation of the dogma EENS? Joseph Shaw and Thomas Pink are also keeping quiet on this point.
-Lionel Andrades