"Post-synodal document to be published after Easter. It will be revolutionary, Kasper says"

Vatican Insider Staff, "Post-synodal document to be published after Easter. It will be revolutionary, Kasper says" Vatican Insider News (La Stampa, March 17, 2016): "The director of the Holy See Press Office, Fr. Federico Lombardi, said it could be presented in the second or third week of April": 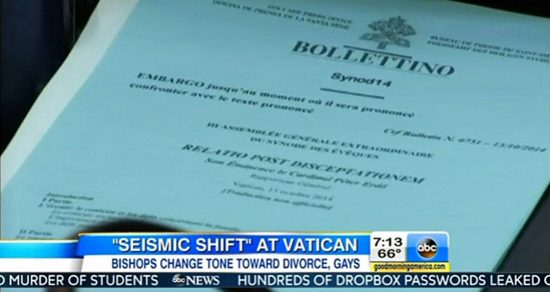 The apostolic exhortation which will draw together all that emerged from the two Synods on the family, will be dated 19 March but will be published after Easter. The document will respond to the expectations of today’s world with regard to the pastoral care of the family, starting with the request for a greater openness towards irregular couples. This is according to Vatican spokesman, Fr. Federico Lombardi, who said the exhortation could be presented in the second or third week of April.

It is worth quoting a statement made by the theologian cardinal Walter Kasper, who gave the speech to the Consistory on February 2014, which marked the start of the renewal process: “The document will mark the start of the greatest revolution experienced by the Church in 1500 years.”

Posted by Pertinacious Papist at 10:24 AM
Email ThisBlogThis!Share to TwitterShare to FacebookShare to Pinterest
Labels: Confusion, Doctrine, Pope Francis, Signs of the times, Synod, Vatican

Reading this post back to back with the Benedict XVI one brings into focus the strange phenomenon that has come to define the postconciliar Church. It is always "both/and" to the point that the law of contradiction is abolished and clear thinking becomes impossible. Everything means nothing and nothing is understandable. "No salvation upside the Church" becomes meaningless, mortal sin becomes an antique concept, and salvation becomes affirmation. The fundamental problem is not liturgy: the real rot is at bottom bad belief and lack of faith in dogma as a lived reality. Even the right words are gutted when those speaking them can mean whatever they please. Which is why Francis can write 200 pages and none of it is concretely heretical, just essentially off.

If the Cardinal is correct, God help us!

"It will be Revolutionary, Kasper says"

These are words I never wanted in the same sentence. Is there not a Catholic who will solve the problem of these antichrist cardinals?

I await the related commentary from a Vatican spokesperson on the sacredness of humanity's rights to digital privacy.


Francis is a XXXXXXXXXX, let us say, know and believe that up front. I would XXXX on his feet if I ever had the sad fate to meet this XXXXX of the earth. I would welcome with joy a formal excommunication for calling him the XXXXXXX that he truly is! I dare him to do it!

Yes, my Bishop/Cardinal; and the Pope, both know who I am; of that I am certain.

They know of my faithfulness to the vows I spoke and that I, at my worst, shine like the sun in comparison to the VAST MAJORITY OF CLERGY AND LAITY!

"Is there not a Catholic who will solve the problem of these antichrist cardinals?"

But there are hundreds of millions of Muslims who are in the process of solving it, one continent at a time.

Without this new theology, based on an irrational observation it cannot be said the dogma extra ecclesiam nulla salus has been changed or discarded.They have to use the irrationality: Synod Exhortatioin
http://eucharistandmission.blogspot.it/2016/03/without-this-new-theology-based-on.html