"I will go in unto the Altar of God
To God, Who giveth joy to my youth"
Tridentine Community News by Alex Begin (October 9, 2016):

This month is busy season for special Tridentine Masses in our region. This Tuesday, October 11 at 7:00 PM. the Oakland County Latin Mass Association has arranged a special High Mass in the Extraordinary Form at Detroit’s historic Ste. Anne Church. Fr. Mark Borkowski will be the celebrant, and Wassim Sarweh will lead the music. Ste. Anne is the oldest parish in Detroit, dating back to the time of University of Michigan co-founder Fr. Gabriel Richard, whose tomb is in the church’s chapel.

Ste. Anne until recently was run by the Basilian Fathers, as is its sister church on the other side of the Ambassador Bridge, Windsor’s closed-for-now Assumption Church. 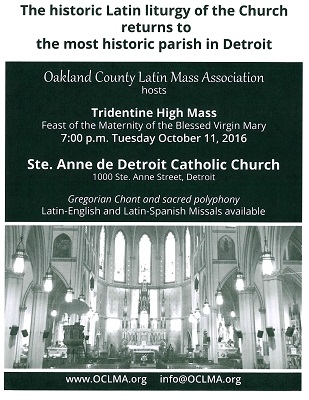 Between 700-900 of the faithful attended the first Tridentine Mass held at St. Paul Albanian Church in Rochester Hills last Sunday, October 2. This Mass set the record for attendance at a local Tridentine Mass in the post-Vatican II era. A handful of people traveled from as far away as Saginaw to be part of the event, which was supported by volunteers from the Oakland County Latin Mass Association and Windsor’s St. Benedict Tridentine Community. Feedback from the parishioners and pastor was enthusiastic, and St. Paul’s plans additional Tridentine Masses in the future. 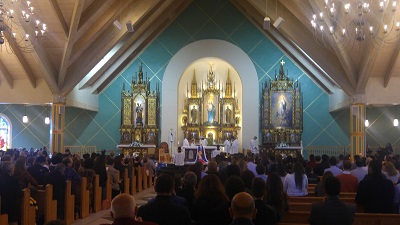 Approximately 400 faithful turned out for the Solemn High Mass at Royal Oak’s Shrine of the Little Flower last Monday, October 3. At least 200 of them appeared to be locals, new to the Extraordinary Form. [Photo by Teresa Chisholm] 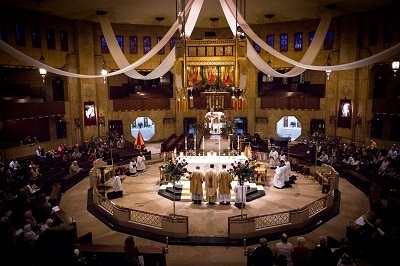 Sacred Heart Seminary Professor of Philosophy Dr. Phil Blosser will speak on “Liturgy and Beauty” at a reception following the 9:45 AM Mass at the Academy of the Sacred Heart Chapel in Bloomfield Hills next Sunday, October 16.