The pleasure of knocking back Bourbon lies in the plain [sic; plane? -psl] of the aesthetic but at an opposite pole from connoisseurship. My preference for the former is or is not deplorable depending on one's value system--that is to say, how one balances out the Epicurean virtues of cultivating one's sensory end organs with the 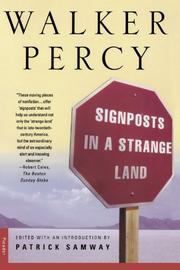 greatest discrimination and at least cost to one's health, against the virtue of evocation of time and memory and of the recovery of self and the past from the fogged-in disoriented Western world. In Kierkegaardian terms, the use of Bourbon to such an end is a kind of aestheticized religious mode of existence, whereas connoisseurship, the discriminating but single-minded stimulation of sensory end organs, is the aesthetic of damnation.

Walker Percy, "Bourbon" (1975), from Signposts in a Strange Land: Essays

I read his novel 'The Last Gentleman' and found it odd and pretty graphic at times.

Are his essays any better?

It depends what you mean by "better". His essays are quite different, some of them rather academic. He's very interested in language and meaning. But most are fascinating.

He's got a very deep sense of humor, and somewhat easy to miss if you take everything at face value.

He's "graphic" at times in his novels, but you have to see what he's up to. Lots of people would pick up Percy novels who would never take "religion" seriously.

But what he does is to hook the reader unawares. For example, in one of his novels, Tom Moore, the protagonist, who is a lapsed Catholic cheating on his wife, goes to visit a psychologist, because he's troubled by his guilt feelings. The psychologist tries to help him by assuring him that these are merely feelings, that he should look on the bright side of life, etc. and think positive thoughts. Moore still has enough of a Catholic memory to respond, however, by asking: shouldn't he be feeling guilt, however, if what he's done is really wrong?

Yes, some scenes are a bit sexually indulgent, and you'll have to judge that for yourself. When you see what he's up to, however, his whole project is littered with little pointers to God's grace.

One of his most hilarious books is Lost in the Cosmos: The Last Self-Help Book, which is a parody of self-help books in the form of chapters full of questions to ask yourself, etc., but all aimed at provoking the reader to reflect profoundly about the deeper issues of his or her life.