Winner of Dutch art contest on current multiculturalism in Europe 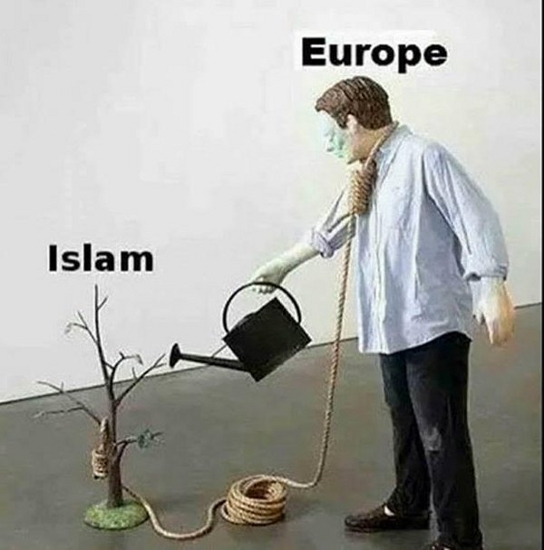 Nice . . . My only quibbles are that the tree should be much bigger and the rope much shorter.

Spiritually and theologically, Mahometanists and Messiah-Deniers are aligned in ways that could result in a relative peace between them in that each believes in a monotheistic God (while denigrating the Trinity) and each condemns idolatry (statues, Icons etc) but there is the Lil' problem of geography and racial supremacism.

Both Mahometanism and Rabbinical Judaism are four square opposed to us spiritually, theologically, morally, ethically (both teach they can cheat. steal, and even kill christians because we are not really human) etc and yet Catholics routinely claim we all worship the same God and and that the Messias-Deniers are our elder brothers even though they are younger than us, Rabbinical Judaism having formed in 70 A.D. (maybe the Mahometans will someday be called our elder brethren too)

These truths are quite funny in their abject insanity and denial of reality but few get the joke and so we must be serious and respond with a solemn positive shaking of our heads in agreement when we hear these things taught/said because ecumenism excludes humor.

Well, ABS, by God's grace miracles are possible, and the Minor Prophets to prophesy a day when those who crucified our Lord will see Him Whom they pierced and weep. But in the meantime, I think the Jews regard Muslims as the more proximate threat to their existence than Christians (despite occasional hostility toward Christians in pale). I pray for the conversion of everyone -- Muslims, Jews, Protestants, even the multitude of lapsed and apostate Catholics and daily for the pope! ("Is the Pope Catholic?" Ha!)

'Palestine' (I meant to say, not 'pale'). Ugh. Interruptions!

Dear Doc. You prolly know of the Naahide Laws and the Catholics increasing acceptance of them.

Idolatry - that is what we Catholics do - is outlawed and it is a crime to be punished by death .

Mahometans are not now, and never will be, in danger of violating any of those laws.

Just trying to cheer you up :)

c. matt: The rope is the correct length, or even too short. Initially Muslim rise and its effect in imperceptible. As I once heard Msgr. Lefebvre speak [he of outstanding missionary experience] - I paraphrase: 'they are a lovely and amenable people until they get the upper hand'!

Amateur Brain Surgeon, to deny that Jews and Christian worship the same God is Marcionism -- but I suppose that doesn't worry you.