This one, again, from underground correspondent, Guy Noir - Private Eye, our researcher, culture analyst, and news critic on retainer: 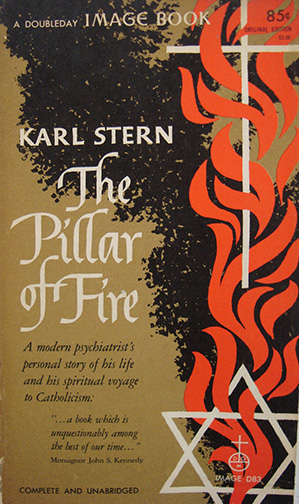 I discovered Karl Stern while researching Frank Sheed. This piece in The Tablet is remarkable for its candid observation of how totally fogotten he now is, just like so much of preconciliar Catholicism. And it is also telling for its indication of how necessary the author feels it is to attempt a Ratzingerian-like rapprochement between old and new eras. Stern can be praised for many things, but he can't be allowed to get away with having had a complex about his own Jewishness? Is that actually so problematic? If he was conflicted, he was conflicted. Why does that have to mean the tarnishing of his testimony, or become such a point of focus? If he felt like he was the best person to tell and interpret his own journey, who are we not to take it at its word?

The Pillar of Fire

is remarkable reading: it does need rediscovering. Service rendered and appreciated.

What it doesn't need is defending. Exception taken.

Deborah Ostrovsky, "The Freudian Became a Catholic" (The Tablet, August 25, 2014): "Karl Stern, Canadian psychiatrist and writer, was in his day a famous Catholic convert. Why has he been forgotten?"

Who was Stern? Internet searches had turned up little. My plan was, during a European holiday, to donate The Pillar of Fire to Munich’s Jewish museum. It only seemed right: to give it to a place dedicated to a people many of whom scattered to Montreal, London, and Washington Heights, but only if they didn’t perish in Bergen-Belsen or Dachau. I had skimmed the first section and knew that Stern had adored Munich, where he had studied medicine. “With the exception of Paris,” he writes with an ardor usually reserved for descriptions of lovers or great works of art, “there has never been a town which had so much individual expression, so little of the artifact and so much natural growth.”

Later I would discover that Stern’s memoir, his novel, and assorted essays on music, medicine, and religion had made him a quasi-celebrity. Back in 1939, his young family settled in a jerry-built row house near the mental hospital where he worked on Montreal’s outskirts. A decade later, he would become one of Canada’s founding fathers of psychiatry. He would write best-sellers like The Pillar of Fire, reprinted 17 times in paperback and translated into Spanish, French, Italian, Dutch, and German. His 1961 study on psychology and religion, The Third Revolution, would spark correspondence with Carl Jung. The Flight From Woman (1965), a philosophical treatise on modern society’s polarization of the sexes and its de-feminization, would make him a common name in women’s magazines. He corresponded with leading rabbis, poets, and writers—Robert Lowell, Ivan Illich, C.S. Lewis, Thomas Merton—and other religious luminaries of his day. Along with Jean Piaget and Maria Montessori, he would join UNESCO’s Committee of Experts on German Questions. Graham Greene was his houseguest. American Catholic activist Dorothy Day was a close friend. He would be profiled in Time and write for the New York Times.

The Munich museum expressed gratitude for my donation, although they’d never heard of him.

How did Karl Stern become so forgettable? Little has been written about him since the decades following his death in 1975....

I've been yearning to read this book since I read the piece in The Tablet, but it's expensive to buy online. Fortunately it can be found in many university libraries.


What Marcionite nonsense. Stern might as well have blamed the Old Testament.

"Come out from them and be separate, says the Lord.
Touch no unclean thing,
and I will receive you.”

Religious Jews are consistently following what the Old Testament Commands."

I prefer Rabbi Zola or someone who understands Judaism and sees Catholicism as the fullfilment of it rather than the repudiation of it.

I can't abide the heresy of Marcion. Even if it comes from a Jewish Catholic.

In the Tabletmag article I try to avoid the comments on that link.... It seems there is still Jewish hatred of Catholicism.

Was it because of Stern's conversion that made him an outcast? Had he remained Jewish what would have happened? I always read about Catholic converts from Judaism having faced so much hostility from their community and family.

If you haven't read "Pillar of Fire," then you have no business attempting to criticise it, BenYachov. If you read it, you'll know that Stern DOES understand Judaism very well, having been, after all, an Orthodox Jew prior to his conversion to the Faith of Christ. In his book -- as Ostrovsky even states in her review -- Stern does explain how Catholicism is the fulfillment of the Old Law rather than its repudiation:

"Like many converts before him, Stern saw Christianity as Judaism’s logical fulfillment, not its rejection or its end. In recalling his first Holy Communion, he writes that his spiritual identity had converged both with Christians but also with Jews. After many years of indecision, baptism made him feel closer to Jewishness."

Now, Stern does discuss how God had commanded Israel to be racially exclusive -- and he explains that if the Messiah had not yet come, then that racial exclusivity would still be justified today. That seems to be offensive to you, and so you rashly and ignorantly accuse Stern of being a Marcionite heretic. You need to brush up on what Marcionitism or Marcionism was -- there was a LOT more to it than animosity to Jewish things. Stern, however, had no animosity for Jewish things. Again, if you don't believe God commanded Israel to be separate from the Gentiles, not to intermarry with them, not to adopt Gentile customs and rites, then I would invite you to read the Torah, or read Ezra and Nehemiah. It is God Incarnate who has, as St. Paul said, taken down the middle wall of partition separating Jew from Gentile which God had established through Israel. Jewish racial exclusivity had served its purpose, and there is no longer any need for Jews to be separate from Gentiles. In the Israel of God, there is neither Jew nor Greek. The laver of regeneration and cleaning being extended to the Goyim, they are no longer to be treated as unclean, just as Jesus told St. Peter.

Perhaps you are right & I might have been a bit rash toward Stern but this bit is simply off putting.

Quote"Now I was shaken … by the following fundamental and indisputable facts. Firstly, there were two parties who unanimously and in perfect agreement maintained the racial wall around the God of Sinai—these were the Nazis and the Jews…………………I only had to look at our liturgy to see that this was so. Jewish religion was racial exclusiveness. Mind you, it was racial exclusiveness in its noblest, most elevated form—in its metaphysical form, so to speak. It was a racism exactly opposed to that of the Nazis, but it was racism just the same."END

What is off putting about it is that is it implies God commands "racism" for the Jews which can largely seen as detestable and negative. Perhaps I am reading my modern sensibilities into the text?
Could be but still a bit off putting.

It is an interesting coincidence but last week I stumbled on your argument with Steve Kellermeyer
and someone named Steve Dalton that took place a year ago on his blog.

(BTW I was rooting for you Jordan.)

https://www.blogger.com/comment.g?blogID=5774317&postID=4335974300306482331
It doesn't take much of a leap to go from Stern's statements to Kellermeyer's misinformed assertions on Judaism and race & his misreading of the Talmud & his misquoting of Steinsaltz to claim Jews believe gentiles are animals. Which corresponds to a Nazi view that all non-Ayrans are subhuman.

This is at the bases of my gut reaction. Like I said again perhaps I over-reacted.

OTOH St Melito of Sardis was a Jewish believer in Yeshua. He gives the outline of a primitive Passover rite practiced by ancient Jewish Christians.
He was also the first Church Father to put forth the Deicide charge against non-believing Jews.

Perhaps I should allow some leeway to people to be extra-critical of their own (St Melito was a bit critical of the non-belief of the Jews of his day as was Stern in regards to those of his).

Still such criticism in the hands of enemies has historically lead to tragedy witnessed first hand by Stern.

In my next post I will deal with the charge of Racial exclusivity.

One of the things I find inappropriate in regards to the charge of "racism" toward Jews (and by extension Judaism and the Old Testament) is well you can convert to Judaism. (If I may steal from the wiki) Halakha forbids the mistreatment of the convert, including reminding a convert that he or she was once not a Jew. Hence, little to no distinction is made in Judaism between those who are born Jewish and those who are Jewish as a result of conversion."

You can't "convert" to Nazism. You can't make yourself Blonde, high check boned and blue eyed if you don't possess those characteristics. A black man can't convert to being white & then join the Klan.

When Jesus said to the religious teachers of his time "God can make the these stones into Sons of Abraham" he wasn't saying anything original. He was reminding them that by embracing the covenant you became a son of Abraham.

Of course the New Covenant does it better then the old did but that goes without saying.