People who can't seem to find themselves

A friend and I have been discussing the widespread contemporary phenomenon of, as he puts it, "selves-who-are-not-selves-because-they-are-only-into-themselves," a pathology that seems to afflict not only teenagers and twixters, but purported adults who never seem to grow up, and men and women in a mid-life malaise (or life-long funk) who endlessly seem to be changing not only their toe nail varnish, but their careers or spouses or religions in search of their 'authentic' selves, that je ne sais quoi animating an I-just-need-to-be-'honest'-and-be-'me' goose chase that leaves little but broken relationships and families in its wake. The same phenomenon is found among politicians and celebrities who endlessly reinvent themselves through the spin of public media. When their heads stop spinning, will they know which is 'image' and which is 'original' anymore? All of which raises some interesting questions about the 'self.' 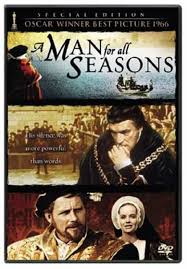 Just today, on that very Walker-Percian theme of the elusive self, my friend sent me the following brilliant review by Steven Greydanus of that classic film, A Man for All Seasons

(1966) -- one of the 15 films listed in the category of "Religion" on the Vatican film list. Greydanus writes:

Who are you, in the end? What, if anything, defines you? What is it that makes you you?

Don’t tell me about your job, your family, your hobbies or interests. All of those are hostage to circumstance, subject to change. Given the right price, the right circumstances, you could leave your job. Your family could be taken away from you, or you from them. Important as these things may be, they are, in principle, transitory. Is there anything in you that is not transitory, not hostage to circumstance, not subject to renegotiation or compromise?

Is there anything, for instance, that you could never, ever bring yourself to do, regardless of the price, or whatever pressure might be brought to bear upon you? And if there is nothing like that — if you are infinitely malleable, capable of becoming, under the right circumstances, anything at all — then are you really anyone at all? Do you have an identity, a self? Or only a particular configuration under present conditions?

A Man for All Seasons is the story of a man who knows who he is. The 1966 film (there is also a 1988 Charlton Heston made-for-TV version), which won six Acadamy Awards, including Best Picture and Best Actor (Paul Scofield), is brilliant and compelling, steely with conviction, luminous with genuine wisdom and wit. The screenplay, well adapted by Robert Bolt from his own stage play, is fiercely intelligent, deeply affecting, resonant with verbal beauty and grace. Scofield, who for years starred in the stage play before making the film, gives an effortlessly rich and layered performance as Sir Thomas More, saint and martyr, the man whose determined silence spoke more forcefully than words, and who then spoke even more forcefully by breaking it.

Quick-minded, urbane, meticulous, cheerful, admirable, and humorous, Thomas More rises to the rank of Lord Chancellor of England before falling out with King Henry VIII over the King’s plan to end his marriage to Catherine and marry Anne Boleyn. When the English bishops break with Rome and Henry is declared "Supreme Head of the Church in England," More, a pious Catholic, can no longer in conscience serve as chancellor, and gives up his high office, income, and great household. To preserve his freedom and protect his family, he also gives up his political and public life, trying to keep a low profile.

But Sir Thomas is too well known to drop out of the public mind, and his silence is widely construed as disapproval, becoming a source of private anxiety and public embarrassment to Henry. What ensues is a riveting cat-and-mouse game, a fox hunt with More as the wily and elusive fox using every trick in the book to elude the king’s hounds baying for his blood. Literally in the book; More is a brilliant lawyer, and his defense is a legal one: if he maintains his silence he cannot be accused of opposing the king.

But presently that is no longer enough, and More must give up his freedom and property in order to save his neck. And when even that is not enough, to preserve his integrity More lays down his neck. All this, because there is something he will not do: He will not swear under oath that he accepts the King’s title and new marriage.

"When a man takes an oath," Sir Thomas explains to his daughter Margaret in a crucial scene, "he’s holding his own self in his hands. Like water." He cups his hands. "And if he opens his fingers then — he needn’t hope to find himself again. Some men aren’t capable of this, but I’d be loath to think your father one of them." (There is a moment, later in the film, when another character does precisely what More is incapable of; prompting my wife to murmur, "Splash!")

All this is foreign to our post-Clinton era, when the ability of celebrities and politicians to reinvent themselves is widely regarded as a basic survival skill, and getting or holding onto power or fame is the highest good. When a brilliant and charismatic lawyer becomes his country’s highest ranking government official, and is then accused and tried for a crime, we do not expect him to be so concerned about perjury that he chooses to sacrifice his career, income, holdings, freedom, and eventually his life. We find it more practical to suppose that, when push comes to shove, people say or do whatever in in their own best interests.

Unless, of course, you happen to want to really commit yourself; unless it is vital to you on some point that you be taken at your word. To be doubted then — to be told that your most solemn assurance is empty, that you are incapable of vouching for the point in question — it’s like being told that you are no one at all, that you have no character, no identity, no soul.

There is, in fact, a character to whom More tells this very thing: Richard Rich, a superficial young man who in the end has a hand in More’s undoing. Rich wants a job in court, but More, knowing Rich’s lack of character, will not put him where he’ll be tempted. Rich begs and pleads, finally professing fervently that he "would be faithful." More looks him in the eye and says deliberately: "Richard, you couldn’t answer for yourself even so far as tonight." And that night Rich proves More right. He’s a kind of reverse type of St. Thomas: As More’s integrity leads to waning material fortunes but increasingly heroic virtue, Rich’s lack of substance causes him to rise rapidly in wealth and status as he becomes increasingly corrupt.

The performances are uniformly excellent. Wendy Hiller brings unrefined dignity to Thomas’s wife Lady Alice, a simple woman who doesn’t understand her sophisticated husband or the invisible threat that gathers round him, and masks her concern with defiance. The film doesn’t mention it, but Alice was More’s second wife, married only four months after the death of his first wife to be a mother to his children. Intellectually they have nothing in common, yet they have come to love one another fiercely; and Alice’s final lines in the Tower invariably bring tears to my eyes.

This is a great film. I believe it is the most profound cinematic depiction of the life of any saint. The fact that it was written by a non-Christian to me only makes the compelling power of More’s faith and virtue more apparent: Here is a man whose inner light is so radiant that the very unbelievers are drawn to pay tribute to it. (The same might be said for Joan of Arc, who so dazzled that crusty old skeptic Mark Twain that he wrote her life story and loved it best of all his works — despite the fact that she, a medieval French peasant Catholic girl, embodied everything that he, an 18th-century freethinking Southern gentleman, was bound to disdain!)

In fact, the spirit of St. Thomas and the beauty of his speech have been captured in part by incorporating some of More’s own words. "For the rest," Bolt wrote in his preface to the play, "my concern was to match with these as best I could so that the theft should not be too obvious." He succeeded.

Related: A Man for All Seasons (Paperback)

BBC Arena produced a wistful, wonderful, strangely moving documentary about Paul Scofield's life which can be viewed in 10-minute chunks by going to YouTube.com and searching for "Paul Scofield documentary." He seems to be a person who found himself very early and went his own way. Thanks to "Eurocine" for posting it.

A good review of a great movie about a truly exceptional man.

I've always loved this movie and especially More's repsonse to Roper who would "cut a great road through the law to get after the Devil".

One thing has always bothered me about it. It was written by an existentialist and as such, it's all about the supremacy of conscience which certainly resonates, but there is an implication that it doesn't matter what your conscience chooses to remain inviolable about as long as it is indeed inviolable in the time of trial. To put it simply, the message is choose what you are and be the best at that as you can be. But in the existential view, it seems reasonable that one can choose to be a Nazi, or a Klansman, and as long as they being the best at that and not waivering in their conscience, it's ok. In other words, there's no truth outside the individual. Am I reading too much into the play?

I agree with you that your description does fit the views of existentialists like Sartre and Camus. It may even fit the views of Robert Bolt, the author of "A Man for All Seasons." But I wonder whether there is not quite enough in the script about God and truth and right and law (notably in More's words to his daughter Meg) to ward off an easy existential subjectivism.

One of my favourite parts of the movie is where Thomas More says, 'And when you are in Heaven for following your conscience and I am in Hell for not following mine, will you come with me, for fellowship.' But even though I like it, I do thing it seems to let everyone who did sign the Oath off the hook. Because it suggests that their consciences were simply telling them to sign - which I find doubtful - and that they would have been doing the wrong thing if they refused to sign.

Dark Horse said...
This comment has been removed by a blog administrator.
9:40 PM

Dunno, Liz. Methinks t'was rhetorical on More's part. None who witnessed More place himself in hell would have believed it, any more than they believed themselves truly "off the hook."