Missionaries needed to bring the light of Christ to pagan Holland 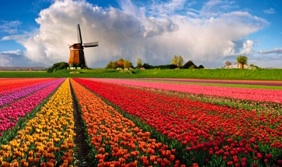 Sandro Magister, "In Holland, There's No More Room for the Child Jesus. Or Then Again, There Is" (www.chiesa, December 30, 2009): "Churches that are no longer churches, but condominiums, stores, or mosques. A Catholicism in danger of disappearing. A reportage from Amsterdam with an interview with Cardinal Simonis: 'We have to start over from the beginning'"

Magister notes that Dutch and Flemish Catholicism seemed to be in solid shape until 50 years ago, strong in its traditions, active in mission. One of its symbols was Fr. Jozef Damiaan de Veuster, or Fr. Damien (1840-1889), an apostle to the lepers on an island in the Pacific, who was proclaimed a saint by Benedict XVI last October 11.

But then, just a few days ago, before Christmas, another great symbol of this Catholicism died at the age of 95 in Nijmegen, Dominican theologian Edward Schillebeeckx, Flemish by birth, Dutch by choice; though, unlike Fr. Damien, he reflected the trajectory of deterioration of Dutch Catholicism.

Magister's article is not about these two Catholics, as such, but about the wider disparity of the earlier strength of Dutch Catholicism and its current decline to the point of cultural oblivion. Interested in some New Evangelization? Here's your mission field. Don't expect it to be as easy as evangelizing pagan natives in the manner of St. Francis Xavier, however; for having already traversed a cultural trajectory of Christianity, and believing themselves to have tried it and found it wanting, the Dutch will be found hardened against the Christian prescriptions for their cultural and personal maladies.
Posted by Pertinacious Papist at 3:46 PM
Email ThisBlogThis!Share to TwitterShare to FacebookShare to Pinterest
Labels: Decline and fall, Evangelization

How to touch the hearts of those coming after christianity (either modern pagan in western countries, or muslims for exemple) ? They have lost the innocence of the pre-christian pagans and developped AntiBoby against christinity so that the Gospel can hardly touch them !
Idem for the protestant who have their own antibobies (such as the numerous legends against papacy) against the catholic faith.