“Are you tired of a church that is old-fashioned and boring?” asked a postcard in the parish mail addressed to “Occupant”.

The postcard was heralding the grand opening of a “megachurch” nearby, and listed what services a person who became a member could enjoy: ample parking, free baby sitting, programs for persons of all ages, good music -- and free Starbucks Coffee and Krispy Kreme Donuts.

Thus opens an article entitled "Mass Marketing Mass," by Fr. John A. Valencheck in the October 2006 issue of Adoremus Bulletin. Of course there is no mention of commitment or sacrifice -- or even Jesus Christ, for that matter. The objective is competition, but -- and here's the kicker -- the presupposition is an entirely alien ecclesiology.

Instead of Church as something that we're supposed to become -- the Latin ecclesia from the Greek ekklesia, meaning "those who are called out" -- we find here something closer to the full-service community center with aerobics, weight watchers, yoga, meditation circles, counseling, reading groups, choir guilds, continuing education for the adults, entertainment for the kids, and blood drives and community service for the socially conscious.

Valencheck writes: "Catholics can fall for this mistaken notion and even feed into it when trying to make the Mass more marketable. Parishes may try all types of tactics. Pastors and their staffs will tackle this dilemma — apparently with the bedrock assumption that the Mass is a painful event. Entire parishes seem to be influenced by this mentality." He writes:

One solution is to make the Mass pass as swiftly as possible, apparently on the assumption that the people who are there do not want to be there, so the object is to get them in and out before they can register the full measure of their boredom. The focus of the Mass is now placed on those who do not want to be there. It is doubly dangerous if the priest, performing his duties in a quick, apologetic fashion, seems to indicate, “This is not really all that important”.

* * *
Just as common (or more so) is the parish that decides the Mass should become more entertaining.

Implementing an “entertainment” plan might target the music, the homily, more lay involvement, bigger decorations, themes, dancing, technology, the encouragement of idle chatter in the church, and a relaxed “presiding style”. There are perilous problems with this approach also. 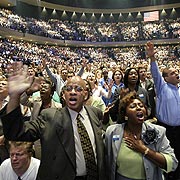 The problem, Fr. Valencheck points out, is that Mass was never meant to be entertainment. Not only is it futile to compete with the megachurches in this arena; it's "like trying to drive a nail with a screwdriver." To even think of Mass in terms of the categories of 'entertainment' is to work against the nature and purposes of the Mass so as to denature it and mislead people in their expectations. You may succeed in getting someone to Mass by the promise of entertainment, "but he is sure to be disappointed -- and doubtly so if he never becomes aware of the real purpose of the celebration, or the reason he is supposed to be there." No wonder one hears people muttering "I don't get anything out of it!" Small wonder one sees Mass attendance plummeting!

So what about all this traditional Catholic ritual and custom that seems so old and outmoded, so -- last century? What's a person to think if he finds himself kneeling and asks himself, "Why am I kneeling? What does this have to do with what we are doing, with the culture in which I am living?” Valencheck answers:

The solution for Catholics is not to stop kneeling or to look for other ways to make the Mass fit modern culture better. In fact, the Mass, and the Catholic faith in general, is meant to be countercultural. The Liturgy helps the attentive and informed worshipper transcend his particular culture, puts him in touch with a deeper reality, with mystery, places him in proper relationship with God, and then sends him on a mission to inform, not to be informed by his culture.

This is why, at least in part, everything that we do at Mass is so different from any other aspect of our lives. What we perceive, what we taste, and see and feel and smell and hear, what we understand is completely at odds with the six days and twenty-three hours of the rest of our week.

The liturgy needs to reflect this. It does so in the way special clothing is used, in what we say, the gestures that we make, the positions in which we put our bodies, in the incense, candles, the ritual, in our art and architecture, in the celibate male priesthood, and in the Church’s insistence on truly sacred music -- that, all things being equal, Gregorian chant has a place of prominence in our Liturgy.

* * *
The successful Mass puts us in contact with the Divine, reminds us of our proper relation, of our dependence, of our obligation, of our blessedness and responsibility. Whether we are bored or not has no bearing in evaluating a successful Liturgy. (Boredom is within the person, the Mass is not.) The only real measure of an effective Liturgy is this: did the ritual celebration make it possible to transcend it -- did it draw worshippers into the Divine, to Christ’s sacrifice, toward the kingdom of God and His will for us?

The solution then is not be apologetic for what we Catholics do at Mass, nor to attempt to overcome “deficiencies” of the Mass as viewed in the megachurch marketplace. Instead, we should delve more deeply into the Sacred Mysteries, and celebrate them boldly, proudly, and well.

Fr. Valencheck goes on to suggest that the task of re-educating Catholics will not be quick or easy. "Like re-educating the taste of a person with a sugar-reliant palate," he says, "the switch to a more spiritually nourished and sophisticated liturgical taste is not accomplished overnight." But unless we make the effort, we may not only lose our patrimony but consign the souls of those entrusted to us to those who are "much better purveyors of sugar than we should care to be." Sugar. It's the dietary equivalent to Crack Cocaine. What does this mean in liturgy? Think about it.

[Father Valencheck is a priest of the Diocese of Cleveland serving at St. Clare in Lyndhurst.]
Posted by Pertinacious Papist at 1:39 PM
Email ThisBlogThis!Share to TwitterShare to FacebookShare to Pinterest