"I will go in unto the Altar of God
To God, Who giveth joy to my youth"
Tridentine Community News by Alex Begin (March 25, 2018):

Veiling of Sacred Images During Passiontide 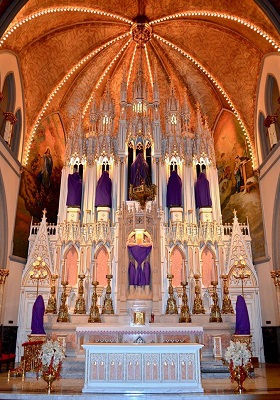 Statues, religious images, and crucifixes are covered with violet cloth in an effort to focus our attention on the Passion of our Lord and heighten our longing for Easter. Note that the sacred objects, even if movable, are not taken away. Even Processional Crosses continue to be used even if veiled. Crosses are uncovered during the Good Friday Service, while other religious images remain covered until the Easter Vigil.

Around metro Detroit several Polish churches [including Sweetest Heart of Mary, pictured] and certain traditional parishes follow this practice. It certainly requires a lot of cloth and either staff or volunteers to perform the veiling and unveiling. If you see a church that has some, but not all, of its images veiled, chances are they didn’t have the material, labor, or time to complete the job.

Unfortunately veiling is not possible at certain settings where it would appear appropriate, such as the Academy of the Sacred Heart Chapel and St. Alphonsus Church. The Oakland County Latin Mass Association and the St. Benedict Tridentine Community, respectively, are essentially renters and cannot determine standards of décor. This is another case of where rubrics must give way to practicality in our current era.

Several years ago, Libreria Editrice Vaticano, the Vatican bookstore, had a web site, paxbook.com, from which one could order most any official publication. Inexplicably, the web site was taken down. For many years the only way to order books from the Vatican Bookstore was to send in a written order, which of course dissuaded all but the most motivated buyers.

At long last a new web site has debuted to make ordering books from Rome simple once again: www.vaticanum.com. Most of the main books are already up there, such as the 2008 Latin Novus Ordo Altar Missal, various Gregorian Chant resources, and Latin editions of many Ordinary Form liturgical books. One glaring omission is the Enchirídion Indulgentiárum, the book of indulgenced prayers in Latin. Hopefully the gaps will be filled in, in due time, and site will be as complete a listing of products as the old paxbook.com used to be.

One of the world’s most accomplished Catholic music directors is Charles Cole of the London Oratory. Not only does he lead three world-class children’s choirs at the church, but he has also mastered the art of organization and promotion of his choirs’ efforts. 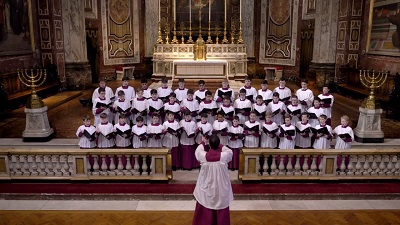 One of the most visually impressive web sites you are likely to see in the Catholic world is the one Charles created for the London Oratory Schola: www.londonoratoryschola.com. This particular choir consists of young men who are studying at the London Oratory School. The choir tours extensively; last October, they performed at several renowned churches in the United States. They sing a wide repertoire of Chant and Polyphony for the 6:00 PM Saturday Vigil Mass at the Oratory; their music schedule is provided on the above web site.

A reader of this column recommends the new CD put out by the schola, Sacred Treasures of England. Information about the CD and an impressive promotional video are here: www.londonoratoryschola.com/recordings/

One of Charles’ other choirs, the London Oratory Junior Choir, consists of boys and girls who are not students at the parish school. They are known for singing Tuesday evening Benedictions at the Oratory and will be featured in an upcoming episode of Extraordinary Faith. More about that choir is here: www.oratoryjuniorchoir.com