"I will go in unto the Altar of God
To God, Who giveth joy to my youth"
Tridentine Community News by Alex Begin (March 11, 2018):

One of the most hotly debated subjects among traditional liturgy fans is use of the pre-1955 Holy Week. Fans of the old Holy Week prefer its more cohesive liturgies, despite the unusualness (to modern sensibilities) of the Easter Vigil typically being held on Saturday morning.

For many years, several churches globally, including some diocesan parishes and churches administered by the Institute of Christ the King, have offered some or all of the Holy Week liturgies according to the pre-1955 form, without having obtained any permission from the Vatican. This is ill-advised; traditional Catholics cannot flaunt the rubrics of the Church, lest it put them in the same basket as liturgical abusers encountered at certain Ordinary Form Masses.

Fortunately a solution is at hand: The February 18, 2018 bulletin of the Priestly Fraternity of St. Peter’s Our Lady of Mt. Carmel Parish in Littleton, Colorado announced that the Pontifical Commission Ecclésia Dei has granted several parishes of the FSSP permission to use the pre-1955 Holy Week, provided that each parish also secures permission from the FSSP Superior. This is the first time that the PCED has ever allowed the old Holy Week to be used. The Latin Mass Society of England and Wales learned that the permission has been granted ad experiméntum, for three years, 2018, 2019, and 2020. Now those parishes that wish to offer the old Holy Week can follow the precedent established by the FSSP and request permission of the Holy See to do so.

It was only within the last few years that this writer recalls the Ecclésia Dei Commission stating that it did not have the authority to permit use of the old Holy Week, since its charter was to oversee the 1962 liturgy, not any earlier version. This new ruling clearly reverses the earlier determination.

A thorough comparison of the pre- and post-1955 Holy Week may be read here: http://www.newliturgicalmovement.org/2009/03/compendium-of-1955-holy-week-revisions.html#.WqIE7-gbOCo

Previous columns have described Rossini’s Proper of the Mass book, which sets the Gregorian Propers of the Mass to simpler Psalm Tones; and the Android and iOS “Chant Tools” app written by Benjamin Bloomfield, son of Deacon Richard and Debbie Bloomfield. Readers may recall that a pilgrim showed the Chant Tools app to Pope Emeritus Benedict XVI. Recently our local choir director extraordinaire (in both senses of the word), Wassim Sarweh, noticed that Benjamin’s upgrades to Chant Tools have provided a resource that has made the Rossini Propers effectively obsolete. 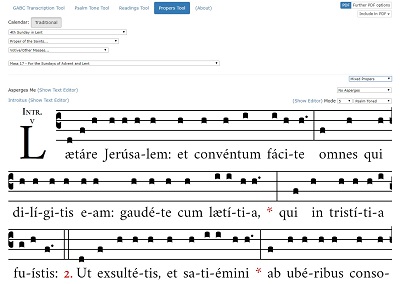 No longer just a mobile app, Chant Tools now runs from a web site, too: https://bbloomf.github.io/jgabc/propers.html. It now provides the incredible functionality of printing the entire Chant Propers and Ordinary [from the Aspérges to the Kyrie on down], menu-driven, on a single, comprehensive set of pages. Everything a choir would need for a Gregorian Chant Mass can be printed quickly and conveniently on one print run.

If you like Rossini’s Psalm Tone Propers, just specify the Feast Day you want [yes, most if not all of the liturgical year is selectable], with the “Psalm Toned” option for the Introit, Gradual, Offertory, et al. You will be provided with the text of the Propers and accompanying Chant notation. How is this better than Rossini? Rossini has the text of the Propers for many weeks’ Feast Days on one page, sometimes far beneath the notes, making it difficult to match the words with the notes at the top of the page.

This is a clear example of modern technology working for the benefit of the Church. Well done, Benjamin!

[Comments? Please e-mail tridnews@detroitlatinmass.org. Previous columns are available at http://www.detroitlatinmass.org. This edition of Tridentine Community News, with minor editions, is from the St. Albertus (Detroit), Academy of the Sacred Heart (Bloomfield Hills), and St. Alphonsus and Holy Name of Mary Churches (Windsor) bulletin inserts for March 11, 2018. Hat tip to Alex Begin, author of the column.]
Posted by Pertinacious Papist at 6:30 AM
Email ThisBlogThis!Share to TwitterShare to FacebookShare to Pinterest
Labels: Detroit, Latin Mass, Liturgy, News