Gianfranco Ravasi [Cardinal President of the Pontifical Council for Culture], in IL SOLE 24ORE (Sunday, February 14, 2016), via Il Timone. Translated into English by Francesca Romana, Excerpts can be found in (Rorate Caeli, February 16, 2016):

"Over and above our different identities, there is no lack of common values: a sense of community, charitable work and the fight against materialism.

“…These various declarations on the incompatibility of the two memberships in the Church or in Freemasonry, do not impede, however, dialogue, as is explicitly stated in the German Bishops’ document that had already listed the specific areas of discussion, such as the communitarian dimension, works of charity, the fight against materialism, human dignity and knowledge of each other.

“Further, we need to rise above that stance from certain Catholic integralist spheres, which – in order to hit out at some exponents even in the Church’s hierarchy who displease them – have recourse to accusing them apodictically of being members of Freemasonry. In conclusion, as the German Bishops wrote, we need to go beyond reciprocal “hostility, insults and prejudices” since “in comparison to past centuries the tone and way of manifesting [our] differences has improved and changed” even if they [the differences] still remain in a clearly defined way.” 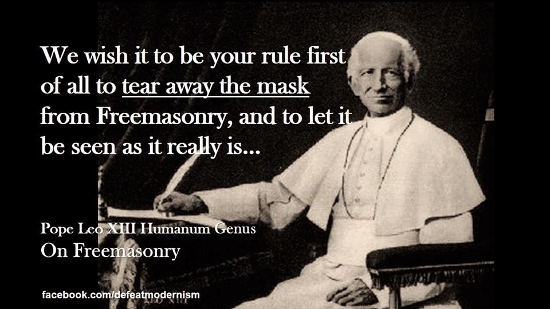 The Church Hierarchy is jake jaw-boning with those sworn to destroy us because ecumenism.

The Church would not jaw-bone with world war two history revisionists though ,which just goes to show two truths:

(1) There is one limit to dialoguing with others

(2) The limit has not one thing to do with doctrine but with who it is who controls discourse.

O, and those revisionists do share many of our common values, a sense of community, charitable work, and the fight against materialism (and many of them use pooper-scoopesr and sort their own trash).

Now, imagine you lived in the 1960s in a community that had a swimming pool and imagine that there was a proposal to hang a poster of Mao dog-paddling down the Yangtze River.

Those who objected that hanging a poster of the greatest mass murderer in history might send the wrong message to the community would have been scolded by the establishment that they are insulated conservatives too afraid too seek common cause with foreign swimmers who, although they had a different value system, certainly encouraged community swimming.

Now,one of this makes any sense at all but it is modernity and modernism and the continuing revolution and neither the secular establishment or the religious establishment really cares to hear from us. No, they'd rather we just shut the hell up and accept their marginalising and name-calling, just so long as we respond to the Diocesan Appeal and continue to admit Mahometan Mooks into our countries.