The "ineffible weirdness" of deformed liturgy 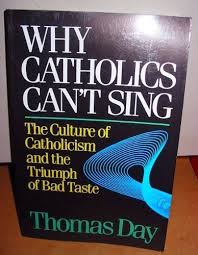 I liked Thomas Day's Why Catholics Can't Sing: The Culture of Catholicism and the Triumph of Bad Taste

(New York: Crossroad, 1990) when it came out. I knew it would be entertaining, but I had no idea it would be so informative about why Catholic music and liturgy have developed the way they have in contemporary Catholicism. The book was well written, read easily and was obviously targeted at a broad audience; but it was also an education in things I did not then know about the history of the modern Church, like the various strands of Irish, Italian and German influence on liturgy in the American Church.

I recently happened across a sequel by the same author, entitled Where Have You Gone, Michelangelo: The Loss of Soul in Catholic Culture

(New York: Crossroad, 1993). Dated, to be sure: that's almost two decades ago. But, to put things in perspective, my favorite college professor used to warn our class not to bother buying any book published within the last 50 years, since, he said, it hadn't yet garnered a sufficient track record to establish itself as a classic worthy of purchase. Hyperbole, of course. But he has a point. And the book looks to be a good read, perhaps a bit more playful, even, if no less serious, than his first.

Here's just a bit from his Preface to give you a taste. "This is one of the most important things to happen to the Catholic church in its entire history. You must experience it!" It sounded urgent, says the author, so he went along "to experience the experience."

The occasion, apparently sometime around the year 1980, was a Mass at a convention of a Catholic organization. Multitudes had descended upon a large cathedral for what was expected to be the sort of post-Vatican II phenomenon that would change the face of the church, if not the world, FOREVER. Multitudes eagerly awaited the experience.

Finally, music indicated that the liturgy had begun, he says, and for the next hour or more, he says he had the uncomfortable feeling that he was attending an illustrated lecture on the meaning of the word "decadent." It was like watching all his loved ones and friends disintegrate in front of him from a loathsome but unnamed disease:

Maybe it was the music: much strumming of guitars; one "contemporary" song sliding, like warm pudding, into another song of similar consistency. According to the printed Order of Service, nearly the entire liturgy would feature the songs of a famous group of "folk" musicians. Sung prayer, in other words, would also double as a demo-session, a little free advertising for the group.

Pain! Oh, the pain of listening to adolescent self-pity and self-importance in song! It would have been bearable if the congregation, caught up in the fervor of the music, had been carried along in its mighty sound, but very few people in the congregation were actually singing.

Looking for a distraction -- anything to take his mind off the group's slouching melodies, he began to look for relief in art, in the building's decorative features, which might be "read" as if they were an architectural prayerbook; which did not work too well, because the cathedral, a mountain of stone piled upon stone, "suggested a combination of a maximum security prison and a Victorian train station," though not utterly without charm. Finding that charm, however, was a little difficult since the building "had recently been subjected to extensive plastic surgery in an effort to make it look more youthful, more postconciliar." During the facelift, "the cathedral had lost some of its gingerbread ornamentation and statues that were too cloying for modern taste, but it had also lost some of its character."

His search for a prayer in architecture was interrupted, abruptly, by an amplified voice.

The presiding priest, holding a microphone now, began the Mass by telling us who he was and who the concelebrants and singers were and who we were and how wonderful it was that we had come. To soften us up even more, he made a little attempt at humor. (nobody even smiled.)

This kind of verbal intrusion, the opening warm-up monologue, is, of course, the modern post-Vatican II method for gathering Catholics together; it is supposed to make everyone feel at home -- but I am positive that the only thing everyone could feel was a rhetorical cattle-prod being shoved into the ribs. The man was forcing us to pay attention to him, and him alone. His warm-up remarks, which warmed up nobody, were really his way of establishing dominance.

A few minutes later there was a homily whose "style" seemed to blend logically with everything else. I shall never forget it.

Drifting from one off-the-top-of-his-head thought to another, the homilist sounded as if he were slipping into a coma. So many sentences ended with a pause and "y'know" that I started to count them. All of this semi-coherent mumbling was supposed to suggest his gift of intimacy and sincerity bestowed upon us, the grateful congregation; yet, at the same time, the intimacy and sincerity were also suggesting that the man had not really prepared his remarks.

It was not easy to discern exactly what the homilist was trying to say with the verbal fragments he was casually dribbling here and there, but a theme gradually emerged and it was this: "them" against "us." Out there in the world were "them," the people who just did not understand the revolution that had changed the Catholic church and the way it should worship after Vatican II. They were powerful, these reactionaries, but they would eventually be swept away. The Spirit was with "us," the authentic Christians of the post-Vatican II era, the only people who possess the true faith in Jesus Christ . . . "y'know."

Right then and there, at that very moment, he says, something forcibly struck him, something clicked ... or snapped:

I still spend a few of my waking hours trying to figure out why anybody with more than three functioning brain cells would put the label of greatness on something that was so embarrassingly shallow, why Catholic parishes by the thousands would try so hard to duplicate that same "atmosphere" of dense and banal immaturity . . . and why I reacted so badly, when I should have just walked out.

. . . I did not go to that cathedral with the idea that I should be reassured by traditional Catholicism expressing its conservatism, its orthodoxy, in traditional rituals. I certainly was not expecting to be uplifted with ceremonies, music, architecture, and preaching that were all glorious beyond description. I did, however, assume that, in a manner that an anthropologist would describe as a universal human phenomenon, I would be part of a collective, common prayer (an activity that comes in many different forms). Instead, I found myself in the middle of something very . . . weird, almost freakish, and it could not be explained away according to the ideologies of conservatism or liberalism. I realize that a High Anglican might find a Cherokee rain dance a trifle weird, just as a Presbyterian might put the same label on a Marionite Catholic liturgy from Lebanon. But the weirdness of that "experience" in a cathedral was something of an altogether different order, and I could not put my finger on it. What was the source of the problem?

The author says that his research for this book was part of his own personal quest to discover what had caused that feeling of being in the presence of "ineffable weirdness: something bizarre, neither fish nor fowl, weak, vaguely diseased." Whatever it was, he writes, "the weirdness had a life of its own and effectively blocked any encounter with theological messages that the ritual was trying to convey."

The author has no illusions about his audience:

Younger readers -- especially Catholics born after, let us say, 1960 -- are hereby forewarned. They may find it difficult to "imagine" whole sections of this book. Older Catholics will read a particular sentence and their minds might be flooded with memories (good and bad) of sights, sounds, and even smells. The younger Catholic will read the same sentence and comprehend only words printed on a page. One reason I wrote this book is to give younger Catholics a different perspective, so they could "imagine" a broader Catholic culture that most of them have never known.

Posted by Pertinacious Papist at 12:05 AM
Email ThisBlogThis!Share to TwitterShare to FacebookShare to Pinterest
Labels: Book notice, Liturgy

Ineffable weirdness-- that's just what it is! I suspect the devil is behind it, because there's no *human* reason to be so silly and banal. Unless those in charge of lame liturgies want to disguise and cover up real Catholicism as much as possible, but they aren't clever enough to create anything beautiful or interesting to put in its place.

I had to read the last paragraph again. I think he's saying he'll be describing the old, traditional culture that younger readers have never known? Because at first I thought he was saying he'd describe the extreme weirdness of the post-Vatican II era which has now passed away... a more hopeful thought.

"'vaguely diseased.' Whatever it was, he writes, "the weirdness had a life of its own and effectively blocked any encounter..."

Spot-on description of many Catholic scenes I visited pre-conversion. And the people used to it are like, "What do you mean...?" I think they fact there is as much mass attendance as remains is a testimony to grace, since the extent of the cultural gutting is aw-inspiring.

I consider it awe-inspiring that converts continue to come into the post-Vatican II Church from other liturgical traditions like the Anglican, Episcopalian, and Lutheran, which have often done a better job of preserving a classic sense of liturgical propriety than have contemporary Western Catholic churches.

Thanks. Me as well. To witness the connection between ritual and belief, and the mental toxins afloat, check out the com box on a very balanced little iece at NCR

"Younger readers -- especially Catholics born after, let us say, 1960 -- are hereby forewarned. They may find it difficult to "imagine" whole sections of this book."

This assumes that Catholics born after 1960 know how to read, Tom. Maybe you should have created a video game instead.

Aside from the music of the Church -- gregorian chant -- music of whatever kind, guitar strumming munchkins through Mozart, serves little purpose except to distract. It draws attention away from the objective presence of the divine, and toward a subjective, manipulative, framing of "proper" reaction to that presence. It becomes no longer about Him, but about us supposedly experiencing Him through a musical lens -- maybe a real real good one, maybe one insipid and tawdry. Doesn't matter: any way you slice it, the direction is absolutely wrong.