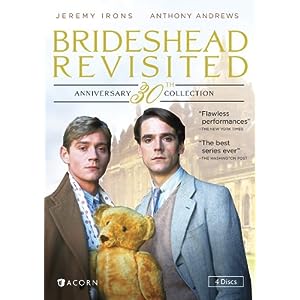 Three years ago, my wife gave me the boxed DVD set of the British television series Brideshead Revisited.

No doubt most readers of Inside Catholic will have long since read Evelyn Waugh's masterpiece and seen the filmed version. The great Catholic fiction writers of the 20th century were not particularly happy to be thought of as "Catholic novelists" -- that tag might seem to call into question the seriousness of their art: Was it really a sort of crypto-proselytizing? Hence Graham Greene (who left us all wondering just where he might wish to locate himself with regard to Catholic notions), Waugh, François Mauriac, Flannery O'Connor, and Walker Percy, to name only a few, tended to think of themselves as novelists "with Christian concerns," not primarily as "Catholic novelists."

In any event, a reader would have to be especially untutored in the art of reading if he were to miss the central point of Waugh's tale of the Flyte family in Brideshead. It is a story about sin and grace. Contemporary vocabulary can only speak of that family as dysfunctional. If this is the case, then Adam and Eve's family was dysfunctional -- as were Noah's, Abraham's, Isaac's, Jacob's, Eli's, and David's.

One of the DVDs in the box contains filmed comments by a whole galaxy of contemporary critics, commentators, journalists, and pundits of all stripes. And yet, none of them appeared to be at all familiar with the moral vision that Waugh assumed in his story, and which would be assumed by every traditional Jew and Christian, and probably by most ancient Greeks. Or, if these critics were thus familiar, they thought of the vision as at best quaint, and certainly outdated. They all descanted happily about the apparently erotic nature of Charles Ryder's fascination with Sebastian. It's a fashionable category now, and one displays one's bright contemporary colors by speaking of the matter with the same insouciance as one speaks of "sexually active" people and so forth. Not only is the matter morally neutral: It is boorish in the extreme to permit the smallest tincture of valuation to seep into one's discourse.

But I mention that detail only by way of illustrating a more general innocence of tradition exhibited by all the commentators. The best they could do with the Flytes' Catholicism was either to hold it up to bemused scrutiny or, at least by implication, to decry it. It was the Flytes' Catholicism that obstructed things and made them all miserable. Only Diana Quick, who had played Julia, the somewhat errant oldest daughter, spoke of her own curiosity about what had made Julia renounce Charles (Julia had been married and divorced, for a start, and so had Charles). She wanted to get to the bottom of things. So, she tells us, she got hold of several little Catholic leaflets ("written for seven-year-olds") and read up on things. She concluded that it all had to do with the Catholic notion of sin. There's the problem. Not just Catholic thick-headedness, nor some prim resolve to forbid pleasure to us all. Sin. So -- that's what's at the bottom of Catholic reluctance to consult mere passion in making one's fundamental choices?

Waugh, of course, is unapologetic about what he requires of his characters. Lord Marchmain must repent on his deathbed. Julia must renounce Charles. Sebastian must pay the price for his dipsomania in the redeeming embrace of a community of religious. Lady Marchmain, something of a dragon, carries the burden of her family's transgressions with her to Mass, and to her grave. And Charles, the agnostic narrator, in perhaps the most elegantly handled conversion in all of fiction, is received into the Church (offstage), and, in the very last scene, visits the chapel in the great house, and says "a prayer, an ancient, newly learned form of words . . . ."

Tom Howard is retired from 40 years of teaching English in private schools, college, and seminary in England and America. This column originally appeared in the April 2007 issue of Crisis Magazine.

[Hat tip to D.O.]
Posted by Pertinacious Papist at 8:08 PM
Email ThisBlogThis!Share to TwitterShare to FacebookShare to Pinterest
Labels: Arts and Culture

Some older comments on the Inside Catholic blog are also well-done if a bit jibbing, on that term, elusive, “Neo-Cath” ... More worth a laugh than taking offense...

"The apologetic attitude towards the annulment culture even in “conservative” circles inspires me to re-write a Catholic classic of last century: Evelyn Waugh’s Brideshead Revisited.

In my version, Sebastian Flyte takes theology of the body classes and figures out that he doesn’t know how to love. He cleans up and joins Opus Dei with Cordelia, making six figure incomes for Jesus. Lady Marchmain learns to lighten up, and Lord Marchmain comes back home to finally express his undying faith in human dignity. He dies a Methodist, since that makes him feel closer to Jesus, but everyone accepts him as a “separated brother”.

And most importantly, Charles Ryder and Julia Marchmain go to a diocesan tribunal and get annulments for their previous marriages. They stay together and live happily ever after, teaching a bunch of RCIA classes to bright eyed catechumens. Instead of an empty tabernacle evoking a dreary Latin phrase (“Quomodo sedet sola civitas”), we could have a big gaudy Paschal candle with the phrase, “Be not afraid”, etched in the wax.

Ouch. Only Truth, mix with bitters, stings like that. Or should I say etched in the wax.

Peace be with you.