"I will go in unto the Altar of God
To God, Who giveth joy to my youth"
Tridentine Community News by Alex Begin (January 19, 2020):

Musical Talent Hidden in Our Midst

One Sunday in 2004 at St. Michael’s Church, then the home of the Windsor Latin Mass, our usual organist cancelled at the last minute. For reasons known only to God, this writer was moved to ask his wife to go up and down the aisles, asking each member of the faithful present if he or she might be able to play the organ. With only around 30 in attendance, this was a ludicrous idea. Or was it? It turns out there was a young man present who could indeed play the organ, and he ended up doing the job very well. So well, in fact, that he eventually became the Music Director of the Windsor Tridentine Mass, the first step in what has become an illustrious career in Catholic church music. That young man was Matthew Meloche, who currently serves as Director of Music at Ss. Peter & Paul Cathedral in Phoenix, Arizona.

All parties involved still get a laugh when reminiscing about this event, but it turns out the same strategy could have been used once again to fill a temporary vacancy at the Oakland County Latin Mass Association. After several weeks of the choir singing without an organist, we recently learned that OCLMA member and Sacred Heart Major Seminary Associate Professor of Philosophy Dr. Victor Salas happens to be an accomplished organist and used to play at a seminary in Pennsylvania. After a little arm twisting, he recently began subbing for Sunday Mass at the Academy of the Sacred Heart Chapel. Even more amazing, the OCLMA has been getting two for the price of one: Victor’s daughter Adrienne has been accompanying him on the violin.

If you happen to have (unknown) music talent, by all means ask to audition for the choir at your Latin Mass site. Perhaps your gift could be put to good use in the service of the Lord. 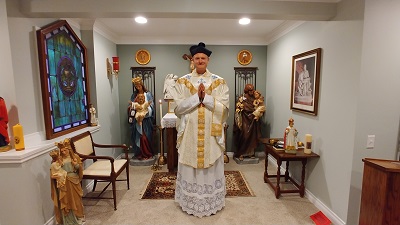 Congratulations to Fr. Christopher Coman of the Diocese of Saginaw, Michigan, who celebrated his first Holy Mass in the Extraordinary Form on Tuesday, January 14, after training from Extraordinary Faith. Fr. Christopher has been invited by the diocese to be one of the priests to serve a new Latin Mass Community being formed, the first in the diocese. Local faithful are delighted that their many years of prayer and hard work to establish a TLM site are finally coming to fruition. 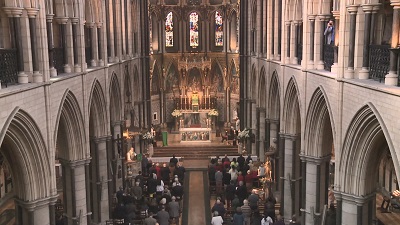 Episode 17 of Extraordinary Faith – London Part 3 of 4 – is now available for viewing on the Extraordinary Faith channel on YouTube and Vimeo. We’ll take you to St. James Spanish Place [pictured], an historic church in London’s embassy district known as a home for traditional Catholic worship. We’ll listen to St. James’ renowned professional choir and learn about London’s thriving sacred music scene from its young music director. We’ll talk with the chairman of the Latin Mass Society of England and Wales, the largest organization in the world dedicated to promoting the Extraordinary Form. We’ll journey south of the Thames River to St. George’s Cathedral, where a girls’ choir has embraced the classical Latin repertoire. And we’ll meet the convert priest who heads the Anglican Ordinariate of Our Lady of Walsingham, a quasi-diocese which serves Anglicans who join the Roman Catholic Church.

An official from a chancery somewhere in the United States recently held a meeting with this writer with an interesting premise: He stated that his diocese has come to the realization that over the next few decades there will be a slow decline of attendance at the Ordinary Form, while the Traditional Mass will experience slow but steady growth, and his diocese wants to be prepared for this shift. It plans to devote an increasing amount of resources to educating, supporting, and promoting traditional liturgy. The official gave permission for us to report this, but not to identify the diocese. Hopefully we will see other dioceses embrace this evolution with a similar positive outlook.