"I will go in unto the Altar of God
To God, Who giveth joy to my youth"
Tridentine Community News by Alex Begin (December 8, 2019): 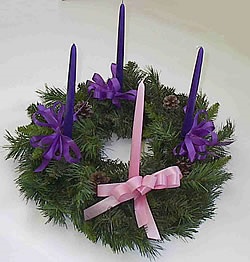 Most Catholic churches nowadays place an Advent Wreath in their sanctuaries. This practice has been questioned by some Catholics. Some contend that this is a Protestant custom, not found in Catholic churches before Vatican II. Is this a matter warranting concern?

There are contrasting stories as to how the Advent Wreath came to be. Some maintain that it evolved from ancient Germanic and Scandinavian winter prayer wheels, which beseeched pagan gods for a return to days of longer light. Others claim that it had its origins in the Middle Ages, with modern forms of the wreath developing in the 17th century. Definitely Lutherans, and apparently some Catholics, began to employ it in that century. Still others believe that it began as a 19th century German custom with 23 candles representing all of the days in December before Christmas. Later it was abbreviated to only four candles, to represent each of the Sundays in Advent. Various documents indicate that Advent Wreaths began to attain popularity in Catholic churches and homes in the mid-20th century.

The current form is meant to help us anticipate the joy of Christmas to come. The use of evergreens symbolizes life through arid times. It is preferable not to include flowers, as they are prohibited on the altar during Advent except on Gaudéte Sunday; it would be premature to express the exuberance that flowers represent.

The anti-wreath position notes that the Prayer of Blessing of an Advent Wreath is not found in the Extraordinary Form Rituále Románum, the Church’s official book of prayers, blessings, and sacraments. Because the blessing is found in the Ordinary Form equivalent, the Book of Blessings, it is argued that the practice has only begun to be encouraged post-Vatican II.

Advent Wreath supporters point out that the very fact that the wreath is composed of three violet candles and one rose candle points to its Catholicity. These are, after all, the Catholic Church’s liturgical colors of Advent. Any Protestant denomination using an Advent Wreath with the same colors is merely adapting a practice originated by the Catholic Church. If a Protestant group modifies the wreath design, for example by changing the candle colors, then for purposes of this discussion, it is not comparable to the Catholic version of the Advent Wreath and should not be cited in comparison. Furthermore, the Extraordinary Form Rituále’s “Blessing of Any Object” prayer may be used to bless an Advent Wreath, just as it is often used to bless various religious objects which do not have their own particular blessing prayers. The Catholic Church supports, and in some cases embraces, sacramentals and practices consistent with the Faith. These evolve over time; for example, the Divine Mercy devotion has only been approved by the Church for approximately 30 years, yet it enjoys popularity among many of those who prefer the Extraordinary Form of Holy Mass. Some of the most popular English hymns employed at Extraordinary Form Masses have Protestant origins. Thus, just because something is new, or partially or wholly created by Protestants, does not mean that it is not compatible with the Catholic Faith as taught throughout the ages.

There is nothing inherently Protestant about the Advent Wreath. It is an optional, para-liturgical component of our churches. So are Christmas trees and a Nativity Set, yet those are also seen in virtually every Catholic Church. None of these objects suggests anything contrary to Catholic belief. While we should not clutter our sanctuaries with every imaginable item that might evoke some religious concept, there is nothing wrong with judicious use of popular customs compatible with our Holy Faith. 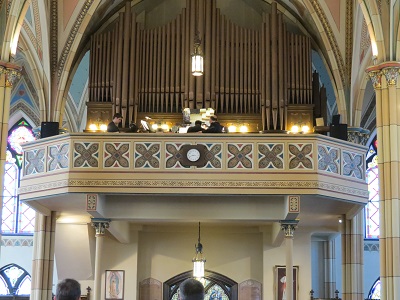 For many years, Assumption Church in Windsor had an impressive choral program, singing the traditional Latin repertoire at their 11:00 AM Sunday Ordinary Form Mass and even producing the occasional recording. Several years ago, however, parish leadership disbanded this choir and terminated the employment of the organist/choir director. Assumption has since offered a contemporary repertoire without organ at all of their Masses. It was therefore encouraging to learn that the St. Benedict Tridentine Community Choir has been invited to provide the music for the Christmas Midnight Mass at Assumption Church this year. It is both an honor for the St. Benedict Choir, which until 2014 had been based at Assumption Church, and hopefully a recognition that some parishioners might appreciate more traditional music.