"I will go in unto the Altar of God
To God, Who giveth joy to my youth"
Tridentine Community News by Alex Begin (January 20, 2019):

The early 20th Century was a golden era for church construction in metro Detroit and Windsor, as in much of the Northeastern and Midwestern United States, Ontario, and Quebec. As waves of immigration caused the population of cities in these regions to soar, demand for churches to serve those new residents also grew.

Just as Duncan Stroik, William Heyer, and James McCrery are nationally known as some of our current era’s most prolific architects of traditionally-styled churches, back in those days a number of architects won commissions across the continent. Among them was Ralph Adams Cram, who designed St. Florian in Hamtramck and St. Mary of Redford. His firm, based outside of Boston, continues today as Cram & Ferguson and still designs traditional churches. Lesser known is the homegrown talent that designed so many beautiful churches. Indeed, a majority of the historic churches we still enjoy in our region today were projects undertaken by locals. Let’s look at a few notable Detroit-based architects and their works: 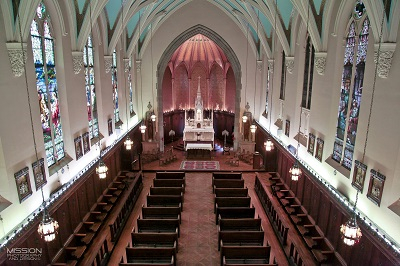 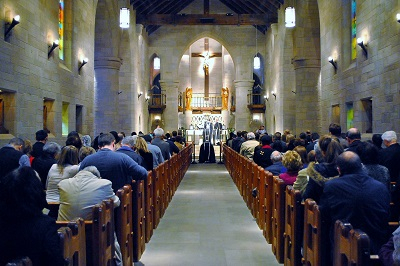 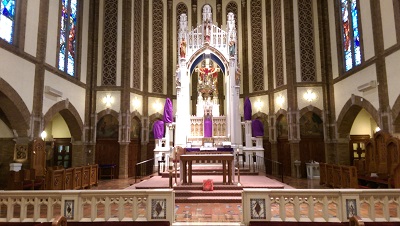 Arthur DesRosiers designed St. Hugo of the Hills’ Stone Chapel in Bloomfield Hills [center photo by Oakland County Latin Mass Association] and St. Alphonsus in Dearborn [bottom photo], both English Gothic style, and St. Ladislaus in Hamtramck. His son Louis is an accomplished architect of homes and office buildings today, but no churches. More local architects will be featured next week. Fr. Lankeit at OCLMA and St. Benedict

Fr. John Lankeit, Rector of Ss. Simon & Jude Cathedral in Phoenix, Arizona, will celebrate the 9:45 AM High Mass on Sunday, January 27 for the Oakland County Latin Mass Association at the Academy of the Sacred Heart Chapel in Bloomfield Hills. He will also attend the 2:00 PM High Mass – which we hope to make a Solemn High Mass – for the St. Benedict Tridentine Community at St. Alphonsus in Windsor. Fr. Lankeit is visiting Detroit for two weeks, taking an in-depth training session from Extraordinary Faith on the Traditional Latin Mass, which he intends to introduce at his cathedral this year.