When students ask me what they need to do to become good church historians, I always answer -- Read history, any history, as long as it is well-written. So here are five recommendations of new books in 2012 which some might want to think about asking for as presents:

Best new book to make it onto my syllabi:

(Yale). I have been a fan of Wilken, a leading Roman Catholic historian of early Christianity, ever since I went to Princeton to hear him give a lecture on the secularisation of modern Christianity. When asked by a member of the audience -- and remember, this is Princeton we are talking about -- to give an example of selling out to the world, he declared (without taking a breath) 'Inclusive language translations of the Bible.' 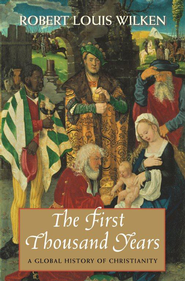 The place descended into uproar.

He concludes: "This book is a superb tour of the first millennium of the Christian faith, written with his usual learning, wit and clarity. It will be on both my Ancient Church and Medieval syllabi from now on."

Dr. Blossser and any other scholar here. What is your opinion of Warren Carroll's History of Christendom?

I've read a bit on the Arian controversy in the first volume (I think), and thought well of it; but I can hardly speak for the whole set.

There's a new history of the Church out by James Hitchcock which could be decent as a one-volume survey. But there are others, such as those by John Laux, Philip Hughes, and the classic treatment by Christopher Dawson (which treats more than just Church-history).

Others may come to mind for other readers.

Not bad, also, are the non-Catholic treatments by Henry Chadwick (early Church) and R. W. Southern (medieval Church), though their non-Catholic (Anglican, I think) perspective at points causes some defects of interpretation.