Pope at year's end: the future of world at stake 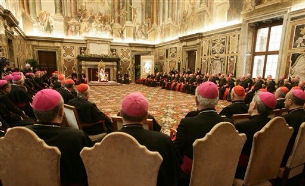 The recent Address of His Holiness Benedict XVI on the Occasion of Christmas Greetings to the Roman Curia (December 20, 2010) contained some astonishing remarks, embedded unobtrusively in this small and seemingly insignificant speech, remarks almost entirely overlooked in the mainstream media: "The very future of the world is at stake."

The context of the Pope's remarks was the near total collapse in the western world of any moral consensus rooted in Christian worldview. The Pope declared: "... an eclipse of reason has taken place ... man no longer uses his intellect in search of God ... but is driven by his passions and desire for self-gratification." He began his comments by comparing the current state of affairs with the collapse of the Roman Empire. "The disintegration of the key principles of law and of the fundamental moral attitudes underpinning them burst open the dams which until that time had protected peaceful coexistence among peoples. The sun was setting over an entire world."

The pope also revisited the present pervasive blight of sexual depravity: "No pleasure is ever enough, and the excess of deceiving intoxication becomes a violence that tears whole regions apart – and all this in the name of a fatal misunderstanding of freedom which actually undermines man’s freedom and ultimately destroys it."

Related:[Hat tip to E.E.]
Posted by Pertinacious Papist at 8:52 AM
Email ThisBlogThis!Share to TwitterShare to FacebookShare to Pinterest
Labels: Decline and fall, Pope Benedict XVI

It is distressing to see the Holy Father NEED to say such things, but it is even more distressing that the Media didnt' pick up on it and lampoon Him for the statement. Every time they lampoon him, a new conversation takes place. I'm not suggesting that anyone should lampoon the Holy Father, in case some thick-headed bloke wants to conclude otherwise. Perhaps the enlightenment will take place anyway?

On a related note, wasn't it Pope Pius X (of holy memory) who criticized the method of the Modernists by claiming that they will surround the orthodox believer and teacher with a cloak of silence?

Pope John XXIII: "Read the signs of the times"

Pope John Paul: "The Church is experiencing a new springtime."

Pope Benedict: "An eclipse of reason has taken place."

So -- who really knows what's happening?