As you can see, this made the front page of the Windsor Star.

In the process of preparing for the restoration of Windsor’s Our Lady of the Assumption Church, architect Jason Grossi climbed up into the nether regions of the bell tower. Like St. Josaphat, Assumption has a tower bell which is rung at the Consecrations of the Extraordinary Form Mass. 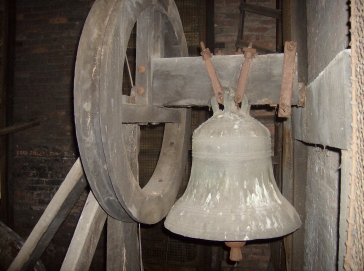 While up there, Jason noticed that above and to the side of the main bell, there was a second, smaller bell. Long disused, the bell had no rope or other activating mechanism attached, however as you can see in the adjacent photo, it was mounted on a frame clearly designed to allow it to be rung.

Jason invited organist and University of Michigan Professor of Campanology Dr. Steven Ball to examine this bell. Steven was able to identify it as having been cast in the late 1700s, likely in France. This qualifies the bell as one of the oldest, if not the oldest, usable church bell in metro Detroit and Windsor. It may be from the original Assumption Church that was located on the parcel of land immediately south of the present church, closer to the Detroit River. Old though it is, the bell is in fine condition, so Steven attached a rope. Once its mounting is stabilized, it will be regularly rung along with the main bell. In a pleasant surprise, CBC Television (Channel 9), the Windsor Star newspaper, and two radio stations have already learned of this bell discovery and found it newsworthy enough to seek out Dr. Ball for interviews. 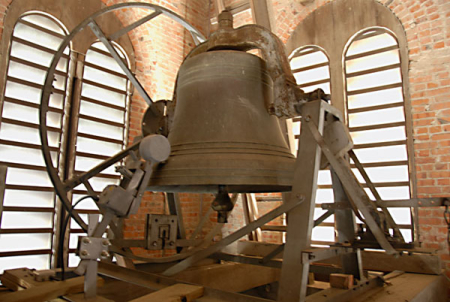 One generally thinks of a church bell as a swinging object. Mounted on a wheel or rotating frame, the swinging of the bell causes the clapper to strike the bell and make the ringing sound. One bell in a tower often also has a “toller”, a hammer that strikes the bell while it remains in place. The more somber and slower ringing of a toller is traditionally used for funerals. The bells at St. Josaphat, St. Joseph, St. Albertus, and Sweetest Heart of Mary Churches are all swinging bells, one of which at each church has a toller. The accompanying photo by Richard Harmon (not of Assumption’s bell) is a clear depiction of a swinging mechanism and toller.

For some reason, Assumption’s main bell had been secured so that it would no longer swing. A special, faster-paced toller was installed to emulate the sound made by a swung bell. Whether one pulled the rope in the room behind the organ in the choir loft, or the automatic timer kicked off the 6:00 PM Angelus, it was the toller that was making the sound. To those of us familiar with the sound of St. Josaphat’s swinging bells, it was evident that something was unnatural about the sound of Assumption’s bell.

After determining that there were no structural issues preventing the main bell from being swung, Steven refurbished and reactivated the original swinging mechanism and connected a new rope to it. If you remember how the bell used to sound, you will notice that there are differences now: First, the bell does not instantaneously start (or stop) ringing, as the swinging mechanism has to build up momentum until the clapper begins to strike the inside of the bell. Second, you will notice a more distinctly “traditional” bell sound, caused by the Doppler Effect of the bell moving closer to and away from you as it swings.

Alongside the motor that drives the toller, there is a second motor in the tower that appears to have originally driven the swinging of the bell. In the next phase of the bell restoration project, the original motor will be reconnected. The plan is to acquire another motor to operate the second bell, and to upgrade the automatic timer to a model which can handle two bells. In the end, Assumption’s two bells will both be ringable by manually pulling the ropes, by automatic timer, and by remote control. The toller on the main bell also remains functional. If you would like to see how the bells are rung at any of our churches, please see one of the altar servers after Mass.

Someone Had To Do the Dirty Work

As is often the case in bell towers, bird guano covered most every surface. Jason and his staff removed over 1,500 pounds of guano in preparation for the bell restoration. The louvers in the tower will eventually be covered with screening to make it more difficult for birds to enter. Underneath the guano, the workers discovered a copper floor. The combination of the copper plus the absence of the sound-absorbing guano results in a brighter and more reverberant sound for the bell.

Bells in the Liturgy

As we have discussed in previous columns, bells have an historic role in the life of the Church. They call people to prayer at certain times of the day, and they alert the faithful of sacred actions taking place within the church. Rubrics specified that tower bells were to be rung at the Consecration in the era before hand “Sanctus” bell sets became popular. Bells serve a joyful purpose when rung for weddings and major feast days, and as a reminder to pray for the deceased when tolled for Requiem Masses.

How do you say? Alleluia!!