On Saturday, April 24 at 1:00 PM, Dario Cardinal Castrillón Hoyos, the former President of the Pontifical Commission Ecclésia Dei, will celebrate Mass in the Extraordinary Form at the High Altar of the Basilica of the National Shrine of the Immaculate Conception in Washington, DC. The stated occasion is the fifth anniversary of the election of His Holiness, Pope Benedict XVI.

The National Shrine is the largest Catholic Church in the United States and one of the largest in the world. It is comprised of the Great Upper Church plus a basement Crypt Church. For many years, the Crypt Church hosted a Sunday Novus Ordo Latin Mass. That Mass has since been discontinued, but the Crypt Church has hosted the occasional Extraordinary Form special event. It was also once the site of a Latin Liturgy Association National Convention. 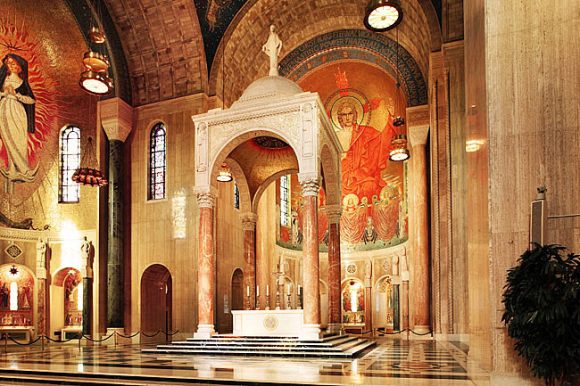 The Upper Church is somewhat of a larger version of New York’s St. Patrick’s Cathedral. Surrounding both the upper church and the lower level are numerous chapels, varying from traditional design with wall-mounted altars, to abstract, contemporary designs. The building is so vast that it includes its own cafeteria.

The high altar (photo from the National Shrine web site, www.nationalshrine.com) is set deep back in the sanctuary and is surmounted by a massive baldacchino. In front of this majestic altar, a gargantuan sanctuary was constructed to accommodate Pontifical Solemn Masses involving an army of sacred ministers. In recent decades, a rather pedestrian freestanding altar has stood at the front of this open space and serves as the Altar of Sacrifice, despite the fact that the high altar can accommodate celebration of the Mass on both sides.

Let us recall the purpose of a baldacchino: To veil the Sacred Mysteries taking place beneath it, much as the iconostasis (wall) veils the Holy Table behind it in the Byzantine Divine Liturgy. It is a beautiful reminder that the Holy Sacrifice of the Mass brings God the Son down to our mundane world.

Fortunately, this glorious altar and baldacchino, the focal points of the whole church, will soon be put back to their intended purposes, and for the form of Holy Mass for which they were built.

An intrepid organization, The Paulus Institute, was formed in 2007 to promote liturgical beauty in the DC area. They invited Cardinal Castrillón, secured the use of the National Shrine (how they accomplished that would be a fascinating story to hear), and recruited members of the Priestly Fraternity of St. Peter to coordinate the complex Pontifical ceremonies. No doubt they are hoping to fill the church as the late Alfons Cardinal Stickler’s Extraordinary Form Mass filled St. Patrick’s Cathedral in 1996.

The event is so newsworthy that EWTN will be broadcasting the Mass live. Special Tridentine Masses on EWTN have become a regular occurrence, as you may have noted.

If any of our readers will be attending this Mass, we would appreciate photos and a first-hand account.

The Ite, Missa Est for Masses XVII and XVIII

A reader of this column asked why so few books include the music for the Ite, Missa Est for Gregorian Chant Masses XVII and XVIII. These are the two Mass settings specified for Lent and Advent. The reason is that prior to 1960, in Lent and Advent, the Ite was replaced at the end of Mass by Benedicámus Dómino. The 1960 revision ordered that Benedicámus only be used when a procession follows Mass, such as on Corpus Christi. Prior to this date, there had been no need for an Ite in the Lent and Advent Mass settings.

An allied question is why this Ite, which is common for Masses XVII and XVIII as well as for the infrequently used XVI, does not mirror the melody of the Kyrie of those settings. The Ite’s of other Gregorian Mass settings do employ the melody of the Kyrie of their respective settings. The answer is that this is actually the Ite of Mass XV; it mirrors Kyrie XV. It is also a more austere and simple Ite, appropriate for Lent.

As modern publications, the Blue Hymnals in use at Assumption-Windsor and St. Josaphat do include this Ite at the conclusion of the Mass settings.

It will be a glorious thing to have the Extraordinary Rite celebrated in the Shrine but it isn't true that Mass is not often celebrated on the high altar there. The crypt is used for mass when the crowd is not expected to be large but the upper church is used for all grand occasions.

I have lived for two summers in DC where I have attended Mass both in the crypt and upper church; and I have been to Right to Life Masses in the upper church.

Indeed it is true that the upper church is used for all grand occasions, but the question, I think, is whether the high altar beneath the baldacchino has ever been used in the last 40 years. In all my experience, I have only seen a "stand alone" altar between the baldacchino and nave used in Masses. Actually the stand alone altar is brought up quite close to the steps dividing the sanctuary and the nave, so that people can see the celebrant facing them (as is expected in the Novus Ordo).

In fact, I would be curious if any Novus Ordo Masss have been said with the celebrant standing behind the high altar under the baldacchino facing the congregation. It seems to me such an arrangement doesn't work, because the baldacchino is set so far back towards the apse that if the celebrant is supposed to somehow 'engage' the congregation (versus populum, as typically in the Novus Ordo), he would seem so distant as to almost seem a speck on the horizon.

Is this the Hoyos the Vatican has now distanced itself from over remarks congratulating a bishop in France on not letting the police know about a paedophile priest?

Yes this is the same one. Let's hope he does not bring his collected letters with hopes of making them into a book.