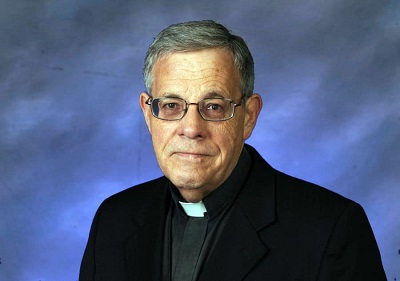 Pastor of Old St. Mary’s in Detroit Fr. Wayne Epperley went to his eternal reward on Friday, July 3 at the age of 66. It was Fr. Epperley who, after 30 years of requests to his predecessors, gladly welcomed the Traditional Latin Mass, Confirmations in the Extraordinary Form, and chant workshops to this otherwise conservative church. His support for an innovative radio ad campaign has been bringing people to the TLM who never would have sought it out on their own. May his soul rest in peace. 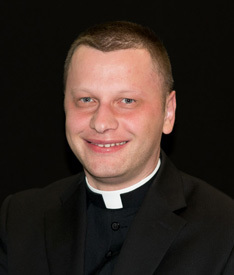 The Archdiocese of Detroit already has one of the largest numbers of Tridentine Mass-trained celebrants of any diocese in the world, and we have just been blessed with yet another addition: Fr. Lukasz Iwanczuk, a priest of the Diocese of Paterson, New Jersey, has arrived to take up his new assignment as Spiritual Director of Orchard Lake’s Ss. Cyril & Methodius Seminary. Originally from Poland, Fr. Lukasz was ordained in 2015 and has celebrated Low Masses in New Jersey. After training from Extraordinary Faith he was able to take on the additional ceremonies of the Missa Cantata and has asked to be in rotation as one of the celebrants of the Oakland County Latin Mass Association’s Sunday 9:00 AM Mass at the Orchard Lake Shrine Chapel. Fr. Lukasz joins Fr. Louis Madey at Orchard Lake Seminary and Frs. Clint McDonell, Cy Whitaker, and Pieter vanRooyen at Sacred Heart Major Seminary as another faculty member at our metro Detroit seminaries who regularly offers the Extraordinary Form.

Following the success of the broadcast in Poland of this year’s Corpus Christi Mass and Procession, Orchard Lake Schools Chancellor Fr. Miroslaw Krol would like to install a permanent camera system in the Shrine Chapel to be used, among other things, to livestream the weekly Oakland County Latin Mass Association High Mass. The cost of the camera system is $18,000, and Fr. Krol has invited any who may be interested in contributing to make a check out to Orchard Lake Schools, write Shrine Chapel Camera System on the memo line, and place it in the OCLMA collection basket. Donations are, of course, tax deductible, and will not be taxed by the Archdiocese. It is worth noting that this is the first of several Tridentine-related upgrades Fr. Krol intends to make to the Shrine Chapel over the next several years; the OCLMA could not ask for a more supportive host. 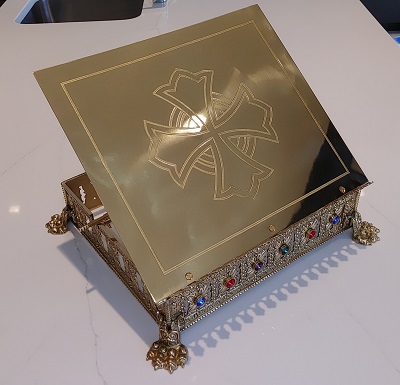 Every once in a while a liturgical object appears that just seems perfect for its intended duty. Most altar missal stands are either made of low quality wood or flimsy metal, too small or too large for the books they must hold, or in the case of older metal ones, tarnished or corroded. Several years ago this writer happened upon an absolutely lovely missal stand, not surprisingly at a church where everything from the lighting to the mural work is first-rate, St. Mary of the Angels in Chicago. Years later that same model of missal stand has been put back into production by, again not surprisingly, the purveyor of the highest quality church metalwork in North America, Adrian Hamers of New York. With customizable jewels in the front, solid construction, and a perfect size for Latin Mass altar missals, these stands will soon make their debut at the St. Benedict Tridentine Community and the Oakland County Latin Mass Association. 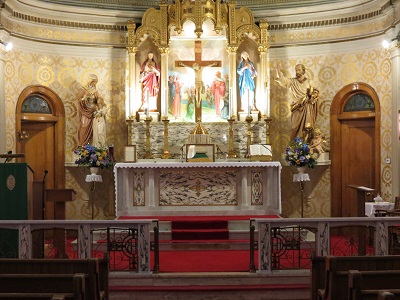 In the years following Vatican II, only one church in the Archdiocese of Detroit had the drive to continue celebrating all of their Holy Masses ad orientem: Holy Family, the Sicilian parish in downtown Detroit. Under memorable and animated pastors Fr. Noel Patacconi and Fr. John Stopponi, only the High Altar was used. In recent years under a succession of administrators, that practice had been abandoned, however with the arrival on July 1 of new administrator Fr. Paul Ward, the practice has been restored. The freestanding altar has been removed, and Masses are once again offered at the High Altar. The 9:30 AM Sunday Mass at Holy Family has long been Latin Novus Ordo, however Fr. Ward has extensive experience with the Extraordinary Form, so one can only speculate what the future will bring.
Posted by Pertinacious Papist at 12:13 PM
Email ThisBlogThis!Share to TwitterShare to FacebookShare to Pinterest
Labels: Detroit, Latin Mass, Liturgy, News, People