"I will go in unto the Altar of God
To God, Who giveth joy to my youth"
Tridentine Community News by Alex Begin (September 8, 2018): 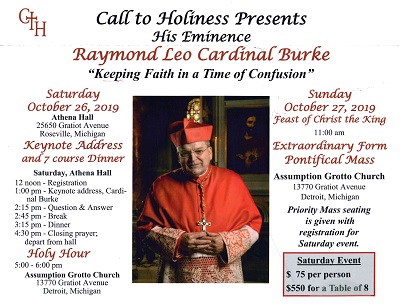 This year’s Call to Holiness conference on Saturday, October 26 has the honor of having Raymond Cardinal Burke as its keynote speaker. On Sunday, October 27 at 11:00 AM His Eminence will celebrate a Pontifical Solemn Mass in the Extraordinary Form at Assumption Grotto Church in Detroit. This is a rare opportunity for our local readers to attend this most elaborate of liturgies. Further information on the conference and Mass may be found at: www.calltoholiness.com 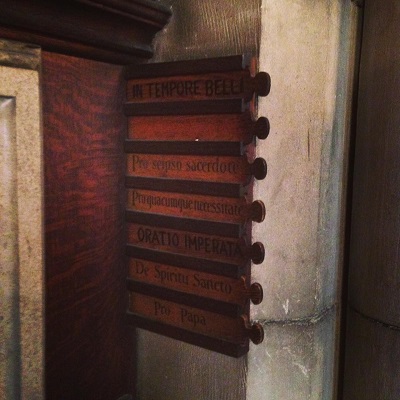 The liturgical and musical powerhouse St. James Spanish Place posted the above photo of a paddle sign located next to the sacrárium (sink which drains into the soil) in their sacristy. The movable boards on this sign are titled after some of the Tridentine Votive Masses which a priest may celebrate. More likely they represent the optional Collects, taken from those Votive Masses, which a priest either is required to or intends to add to a Mass, after the principal and possible commemoration Collects. The English translations of the paddles are In Time of War, For the Celebrating Priest, For Any Necessity, Obligatory Prayer [e.g. as ordered by the bishop], Of the Holy Spirit, and For the Pope.

The second photo, from the Dominicans’ Rosary Shrine, depicts a Sanctus Candle permanently mounted to the wall. Ordinarily we are accustomed to seeing the (optional) Sanctus Candle placed on the altar by a server at the Sanctus and removed after Holy Communion, signifying the Real Presence of Christ on the altar during that portion of the Mass. Apparently the Dominicans consider this to be a more essential component of the traditional Dominican Rite. 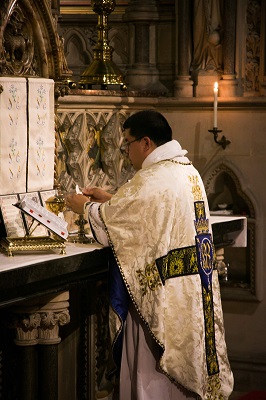 The Strange Case of the Palmarians

One usually thinks of the Traditional Latin Mass as being longer and more elaborate than the typical Ordinary Form Mass. Many of the so-called independent [not in union with Rome], usually sedevacantist, “Catholic” groups take things a step further, using pre-1955 or older, often even lengthier liturgies. However, one independent movement takes the matter in entirely the opposite direction: The Palmarians, a group in Spain, have reduced the Tridentine Mass to a five minute liturgy, focused on the bare essential elements of Offertory, Consecration, and Communion. Their thinking is that this enables a priest to offer more Masses each day, each of which is a source of grace for the world. A more thorough treatment of this odd subject, including the entire text of the Palmarian Mass and a link to a video of one of their Masses, is here: https://magnuslundberg.net/2017/08/29/the-palmarian-order-of-the-mass/comment-page-1/