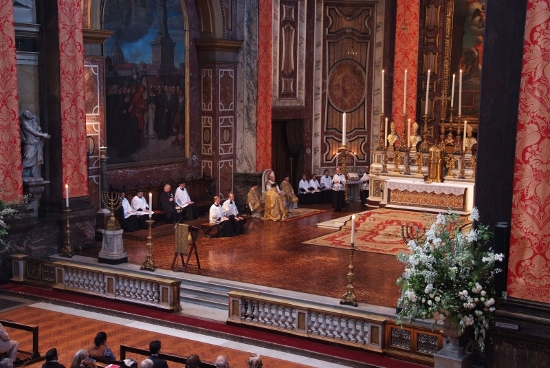 Pictured above is the sanctuary of the Brompton Oratory in London after all the changes had been made that were mandated for Catholic churches by Vatican II and post-Vatican II legislation. Yes, that's right. Read it again.

In short, NO changes were mandated -- not moving the Tabernacle from the central point in the altar, nor placing a chair in the middle of the sanctuary, or removing the Communion rails, or even Mass facing the people with the priest standing behind a free-standing altar.

I remember being amazed by this thesis when I first ran across it years ago, illustrated so simply and ably by Michael Davies in his little booklet, The Catholic Sanctuary and the Second Vatican Council.

The photograph he used was of the sanctuary in the Brompton Oratory too, though not the same photo (as you can see at right).

Makes you stop and think, doesn't it? Especially if you're one of those people who prides himself in being a faithful "Vatican II Catholic"!

Good observation. But I wonder what the purpose is for the floor candles (three are visisble, but there may a fourth) just beyond the altar rails?

Richard, Citing chapter XVI, Pontifical High Mass at the Throne, Preparations: "At the entrance of the sanctuary, four, six or at most seven candlesticks...." P 175, Fortesque/O'Connell, 6th ed. 1937.

One of the Oratory Fathers commenting on the impact of VII said, "I suspect the biretta is worn a little less around the house since the Council".

Richard, they're used (in the TLM, at least) when a bishop is present at Mass. They're to delineate more clearly the boundary between the Sanctuary and the rest of the church, I believe.

(Back in April the Bishop of Copenhagen came to offer Mass at St. Agnes' in Amsterdam, and we had them too. You can see a photo here. I had to ask a few people to find out what they were for myself)

How do the faithful find churches like this? I'm a convert, and no one in my family is Catholic. What Catholics don't realize is that the church building catechizes, and this church clearly teaches the right things: Jesus is important, the Eucharist is a participation in Calvary, and holiness and beauty are co-extensive. (among other things)

I suggest that you Google "Tridentine Mass" in your area and see what you can find.

Years ago, I read the documents of Vatican II as a spiritual exercise, rising at 3 am every night, and I found absolutely nothing that mandated the common changes to church buildings, or even most of the changes in the Mass itself.

Those who made the changes either didn't read the documents, or read them and ignored them.

Thanks to Anonymlous and Voxinrama for enlightening me. Now I know where to re-position those four floor candles that are now placed at the four corners of the Novus Ordo altar in lieu of altar candlesticks on the mensa of the altar.

Why are there two large menorahs in the choir/chancel are? Neither contain any candles so they are being used as statuary. Seems inappropriate.

Why are they there?

I noticed that, too, every time I've been there. But it never struck me as inappropriate, even though I haven't seen it in other churches. Why not inappropriate? Because the Church is the new Israel, Christianity is Jewish, or, better, the fulfillment of Judaism.

There are good symbolic connections, if you explore them -- most of them found also in Scripture. Much better grounded than the proverbial Easter egg as a Catholic adaptation of the pagan fertility cult under the rubric of "new life in Christ."