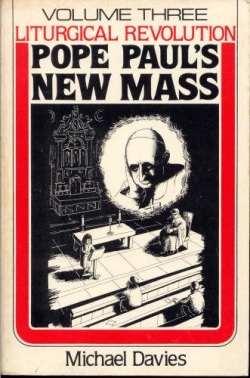 Now that the stream of newsworthy events from the last several weeks is slowing down, we can return to the topic of pioneering Extraordinary Form apologist Michael Davies. [For Part I, see "Michael Davies - Part 1 of 2 - Background," Musings, September 26, 2010]

is part of a trilogy of books, the others being Pope John's Council

Its 663 pages are written in much the same style as, and share some of the content of, other Davies works. It is thus a good starting point for understanding his point of view. “PPNM” was one of the first books to detail the step-by-step liturgical changes that were enacted between 1964-69, the transition period between the Tridentine Mass and the Novus Ordo. It contains chapters describing the evolution of various practices which have been well-documented elsewhere and which will not be rehashed here. More uniquely, PPNM discusses Vatican documents which eliminated the Prayers at the Foot of the Altar, established the abbreviated formula for distributing Holy Communion, the option to receive Communion under Both Kinds, Concelebration, Children’s Masses, and so forth. It is enlightening to realize that the continual stream of liturgical change conditioned the faithful for the most major change yet to come, the imposition of the significantly modified New Rite of Mass in 1969. Approximately 40 documents not frequently discussed nowadays are analyzed, such as 1967’s Tres Abhinc Annos abolishing many of the genuflections and signs of the Cross in the Mass. In some cases, the entire document text is provided in an appendix.

Davies provides ample evidence that intense lobbying and electioneering by a handful of prelates from Germany and France, along with Vatican-designated point man for liturgical reform Archbishop Annibale Bugnini, pushed through these changes and particularly the creation and adoption of the Novus Ordo. This is popular knowledge among those interested in liturgical history, but Davies provides quotes from Bugnini and others proving that was actually the case. Davies also provides numerous quotes from bishops of the era, from the United States and England in particular, who had misgivings about the effect the changes would have on the faith lives of their flocks. The atmosphere was far from one of unanimity.

Davies cites evidence that the reduction, and in some cases the elimination, of language referring to the Holy Mass as a sacrifice was due to a push to make the Mass more palatable to Protestants. He presents a detailed analysis of Eucharistic Prayer II, the Offertory, and other reworded prayers and rubrics as examples of intentionally ambiguous language which can be viewed with acceptance by Protestants as well as Catholics. In conjunction he points out the vocabulary changes (e.g.: “celebrant” to “presider”) and the elimination of “negative” sentences within Scripture passages employed in the readings at Mass.

A chapter is devoted to the General Instruction of the Roman Missal and its follow-on Foreword, the rubrics for and introductory section to the altar missal. There was a surprising amount of dissension over its language, resulting in significant modifications having to be made between the 1969 and 1970 versions. As Davies writes, “What precedent is there in the history of the Church for a sacramental rite needing to have a Foreword written to justify its orthodoxy within one year of its publication?” (p. 306)

The book is filled with memorable snippets such as the following: “The police did not need to be called to Catholic churches each Sunday to hold back the hordes of lapsed Catholics whose faith had been rekindled at the prospect of saying the Confíteor in English.” (p. 92) Nevertheless, PPNM should be judged primarily on the basis of the thought-provoking facts it presents. Regardless of one’s liturgical proclivities, PPNM’s plethora of quotes from Vatican documents, articles, and interviews, amply footnoted, make the reader wonder just what the actual motivations were to impose the changes. Was it true scholarship? This seems unlikely considering all of the changes imposed in such a brief period of time, in an era before electronic communication made collaboration and discussion feasible. Was it a power play to control the liturgy by pushy individuals in an era (the 1960s) where change of all sorts appeared good? Why was making the Mass more appealing to Protestants more important than, for example, appealing to the Orthodox? One is left with the impression that the liturgical changes, and especially their vernacular translations, were rushed through because a door was open that might not be open much longer. Consider how quickly the first English translation of the Ordinary Form appeared in 1969. A mere seven years earlier, Vatican II had not yet even begun. The same thing would be far less likely to happen today, when the Internet would make such a process, and its principal actors and motivations, public knowledge rapidly. Consider that the new English translation of the Ordinary Form has been under the public microscope throughout its entire, over-seven-year process of creation.

There is much to say about the Extraordinary Form that is positive in nature, and our editorial philosophy has been to draw that attractiveness to the fore. Pope Paul’s New Mass admittedly covers some controversial territory with a more negative tone than we like. However, we believe that knowledge of Michael Davies’ significant contributions to the repopularization of the Extraordinary Form, as well as his historical assertions, is an important part of arriving at an intellectually full understanding of the Tridentine Mass as it is celebrated in the world today.

The Angelic Doctor writes in S.T., Q. 97, a. 2, answers the question: "Whether human law should always be changed, whenever something better occurs?" He writes:

"On the contrary, It is stated in the Decretals (Dist. xii, 5): "It is absurd, and a detestable shame, that we should suffer those traditions to be changed which we have received from the fathers of old."

I answer that ... to a certain extent, the mere change of law is of itself prejudicial to the common good: because custom avails much for the observance of laws, seeing that what is done contrary to general custom, even in slight matters, is looked upon as grave. Consequently, when a law is changed, the binding power of the law is diminished, in so far as custom is abolished. Wherefore human law should never be changed, unless, in some way or other, the common weal be compensated according to the extent of the harm done in this respect. Such compensation may arise either from some very great and every evident benefit conferred by the new enactment; or from the extreme urgency of the case, due to the fact that either the existing law is clearly unjust, or its observance extremely harmful. Wherefore the jurist says [Pandect. Justin. lib. i, ff., tit. 4, De Constit. Princip.] that "in establishing new laws, there should be evidence of the benefit to be derived, before departing from a law which has long been considered just."

Bear in mind, furthermore, that St. Thomas is here cautioning against changes in the law even when they would clearly result in "something better"! The only condition justifying change, then is where the "better" so far outweighs the de facto damage brought about by the mere fact of changing the law that it results in a disproportionate net benefit.

As a cradle born during the Council and never really growing up with anything other than the Novus Order, I only came to realize there even was a previous order of the Mass in my 30's (how's that for good ol' 1980's catechism!).

My first question upon learning that the Novus Order was novus was why did we need to change it in the first place? Never eally got a satisfactory answer.

The question is not how the Novus Ordo came to be but how we can realistically get back to something like the Old Mass as the norm. For what seems to be the majority of folks in the pews, an almost vicious anti-Latin bias seems to have been part and parcel of post V2 catechetics.

I think it is Fr. Pavone who says that we need to show America the pictures. In this case, we need to provide them with evidence.

I'm teaching a chant class, for example, to young people. Their parents are often very interested in both the musical and the theological points I make during the class. I suggested this correlation early in the class:

Why do most people think chant is sad, and should only be used for penitential seasons? Simple: the mass parts they can find in most "worship aids" are from the Requiem (if reduced), and we only drag out Latin in Advent and Lent, penitential seasons, and then only the Kyrie and the Agnus Dei. Given this context, it's no wonder that many people think chant has to be sad. On the other hand, when we hear chant done properly and (given the feast) festively, when we understand what we hear and (if possible) sing, we see the Wizard behind the curtain and no longer need to keep chant at arms' length.