One of the most faithful readers of this column is a member of Sweetest Heart of Mary Parish. An active supporter of all three parishes in the St. Josaphat cluster, he regularly teases this writer about acting like a Pharisee. Column topics, he asserts, express haughty disdain for the Ordinary Form of Holy Mass. “We know the Tridentine Mass is superior, and that’s that, those of you who don’t know any better”, he claims to read between the lines.

He believes that the best form of Holy Mass is the Novus Ordo in the vernacular, accompanied by Gregorian Chant, presumably in Latin. He maintains that such a Mass has the advantage of being understandable, yet still displays continuity with the Church’s liturgical and musical tradition. Interestingly, the only place in the area that consistently provides such a Mass is the same Assumption Church in Windsor that hosts the Tridentine Mass, at their 11:00 AM Sunday Ordinary Form Mass. A largely professional choir sings chanted Propers and sacred polyphony, accompanying a vernacular Mass. The Detroit cluster presently offers no comparable alternative.

First let it be said that we are always open to hearing opposing views. Debate of this nature can help each viewpoint be understood more clearly. If you disagree with something expressed in this column, please e-mail the address at the bottom of this page, and include your full name. A reasonable counter-position will be given space on these pages. Our objective is, after all, worshipping God most effectively and living a life in accord with our Catholic faith, not supporting one form of the sacred liturgy per se.

This gentleman’s opinion is not unique. The issue of the role of the vernacular is hotly debated. Does it really make the Mass more understandable? Or does it make its language subject to the whims of the age? Few would contest that the current English Novus Ordo translation has a 1960s sound to it; that is one reason why it is being revised. Our friend’s argument, however, ignores one of the fundamental differences between the Ordinary and Extraordinary Forms: the at-times radically different prayer content. What would he think of a Tridentine Mass in English? It would be “understandable”. It would have the Prayers at the Foot of the Altar and the original Offertory Prayers. This is largely what the transitional 1965 Missal offered. Reinstating something akin to the 1965 Missal would provide more continuity with Catholic liturgical tradition than the present Ordinary Form. We encourage any reader who is curious about a vernacular Tridentine Mass to read the 1965 Missal (and preferably not the 1967 variant). You are welcome to come to the sacristy at St. Josaphat and inspect the 1965 Missal that we have on the shelf. [Or see this Ordinary of the 1965 Mass in English.]

It is important to distinguish the “form” of Holy Mass (in this context, the language and music) from the “content” (the texts of the Ordinary and Propers of the Mass). This writer believes that an analysis and comparison of the texts of the Ordinary and Extraordinary Forms will reveal, in most but not all cases, that the content of the Extraordinary Form Mass, Sacraments, and blessings are more consistent with Catholic teachings and sensibilities than their Ordinary Form counterparts. Consider, for example, the abbreviated and quite different Offertory Prayers in the Novus Ordo Mass: They fail to address the notion of the celebrant’s unworthiness to offer the Sacrifice.

The most frequently heard argument of the pro-Ordinary Form view is one that supports liturgical antiquarianism. If the early Church’s liturgies were conducted in a certain manner, so should ours today. Some of these arguments can be difficult to support, as some of the underlying historical assertions often cited have turned out not to be accurate. For example, the Second Eucharistic Prayer is said to be based on the Anaphora of Hippolytus, dating from the third century. A reading of that anaphora, however, reveals that it is not all that similar. But even if it were much the same, how does that justify the addition of yet more Eucharistic Prayers which are not based on any historical precedent?

While we don’t want to make debate a focus of this column, neither do we truly want to be Pharisaical. What we do want is to be logical. Doctrine and liturgy are logical; they reflect and relate to one another. This is a beautiful aspect of our faith to discover. Recognizing and learning more about that beauty is a fascinating way to grow in faith and devotion. It becomes increasingly apparent how the sacred liturgy reflects Christian concepts and the ebb and flow of life. Preferring the vernacular strictly because it is more easily comprehensible fails to address the essential matter of what the Mass says and prays. It is for reasons of content that many would prefer an English Tridentine Mass over a Latin Novus Ordo. 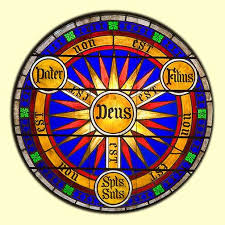 To use an analogy, why have a stained glass window without meaningful stained glass? The accompanying illustration portrays the concept of the Holy Trinity. In the Tridentine Mass, the orations are addressed to specific members of the Holy Trinity, with specific conclusions befitting Who is being addressed. That notion is not so clear in the Ordinary Form orations, which often have abbreviated and less specific conclusions. This is but one example that, taken as a whole, the full beauty of Catholicism is more readily perceptible in the Extraordinary Form, in which the content of prayer, as well as the form of music, rubrics, vestments, art, and surrounding elements combine to lift our minds and hearts to God intellectually, emotionally, and spiritually.

[Comments? Please e-mail tridnews@stjosaphatchurch.org. Previous columns are available at www.stjosaphatchurch.org. This edition of Tridentine Community News, with minor editions, is from the St. Josaphat bulletin insert for December 20, 2009. Hat tip to A.B.]
Posted by Pertinacious Papist at 11:58 AM
Email ThisBlogThis!Share to TwitterShare to FacebookShare to Pinterest
Labels: Liturgy, Novus Ordo, Theology

The "transitional" 1965 Missal is magnificent compared to the 1969 Missal. It preserves much of the dignity of the 1962 Missal without the reckless savaging of the liturgical inheritance by the 1969 Bugnini Missal. It reminds me of a suggestion once made by Peter Kreeft that the 1962 Missal be translated into King James English and substituted for the current NO. Still, many Catholics, especially in England, were already completely demoralized by the changes being introduced into the liturgy before the 1962 or 1965 Missals. There is a lot worthy of discussion in this post. Thanks for this!

What happens if we conduct a test to determine which is better?

To whom is the Mass addressed? Which form accomplishes this both in words and actions?

If the person to whom Mass is addressed understands, shouldn't this govern questions of intelligibility, not other -admittedly interesting - questions?

Any music used at Mass would need to take account of the person to whom the Mass is addressed. Is it fitting for the Mass?

My point in this seemingly odd discursus is to get us to focus not on the claims of the various sides in the liturgy wars, but to ask the question each side must address.

Try this as a modern example.

St. Thomas More described Mass as his "Audience with the king of Heaven". Should we be in a hurry to get this accomplished so that we can be dismissed?

Claims for Extraordinary Ministers of Holy Communion range from the claim that Holy Communion will take too long to the claim that there is a need to diversify roles in the Church. All those willing to let the neighborhood quack perform combat surgery may get in line for an Extraordinary Minister and encourage their rapid deployment.It's not that these people are, in themselves, evil -- they are occasionally very holy people -- but they are not properly trained and empowered by legitimate authority to perform the task which they claim for themselves.

"such a Mass has the advantage of being understandable"

The fact is, Holy Communion really takes no longer with the TLM, since, by the time you get the bevy of matrons and leisure-suited gentlemen up on the altar to serve as EMHCs, and then positioned throughout the church, TLM Communion is half over.